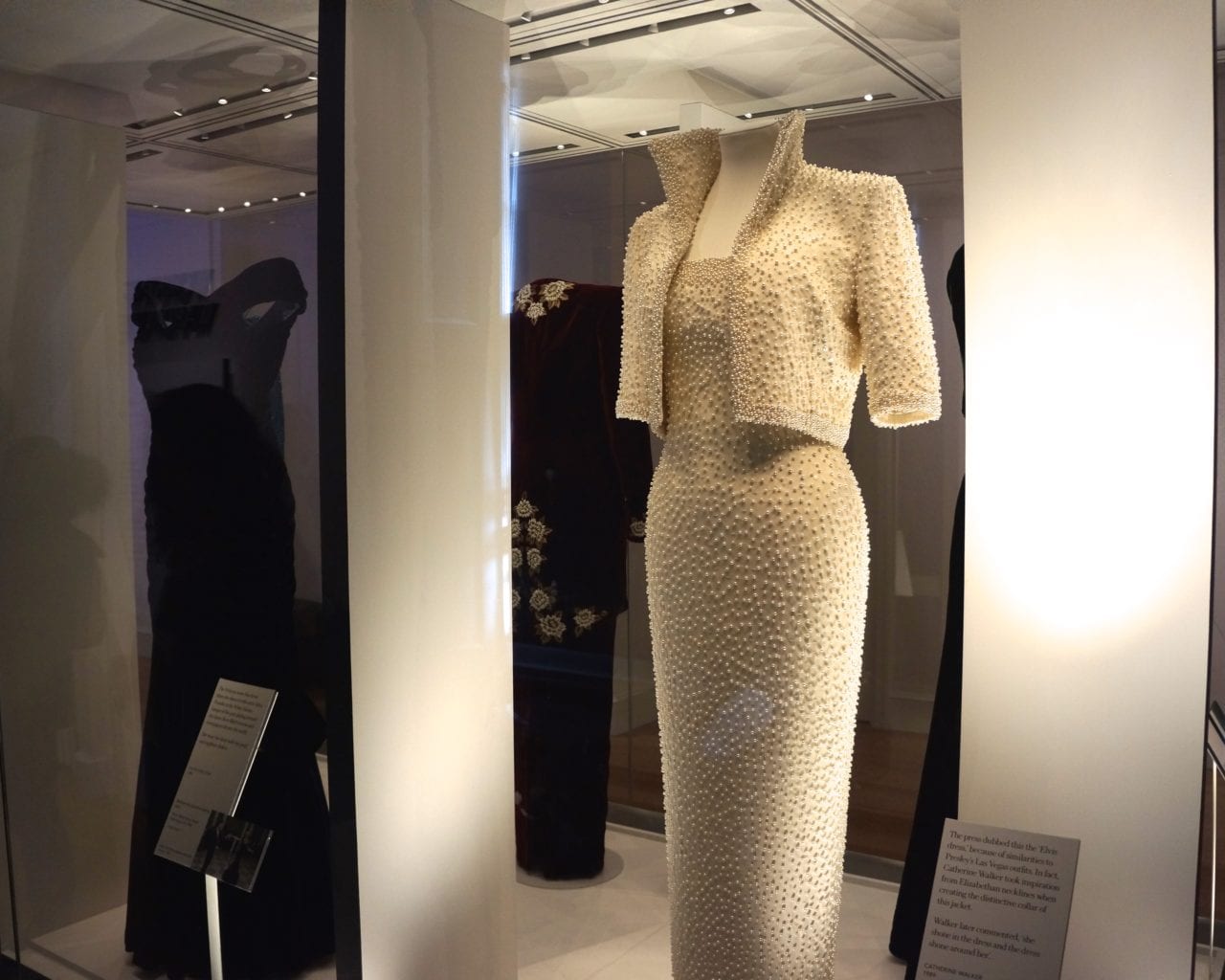 Princess Diana still holds a special place in the historical memory of the world, especially with her American devotees. So, it was with great excitement that we learned there was a new Princess Diana-themed exhibit opening at Kensington Palace while we were in London. Diana: Her Fashion Story features many of the most iconic outfits that Diana wore and displays them in context with the key events in her life. We booked tickets and braved the crowds – here’s our verdict.

I would not consider myself a devotee of high fashion, nor a huge follower of the royal family. Last year when I was in London, the two intersected in the exhibition of some of Princess Margaret’s gowns. I was somewhat interested, so I decided to go. I really enjoyed the exhibit. So, while we were in Dorset on this past trip, my mother-in-law told me there was a new exhibit of some of Princess Diana’s most famous gowns. I was never a huge follower of Princess Diana, my feelings, in fact, were ambivalent towards her (Mr Anglotopia was always a bigger admirer and Royalist than me). I looked up the exhibit and found that this was a unique collection of her gowns, some of her most prominent and most photographed. So, I decided that I would book a ticket to see the gowns that I had only ever seen in magazines or on the telly. Go see history with my own eyes and do some research for Anglotopia. 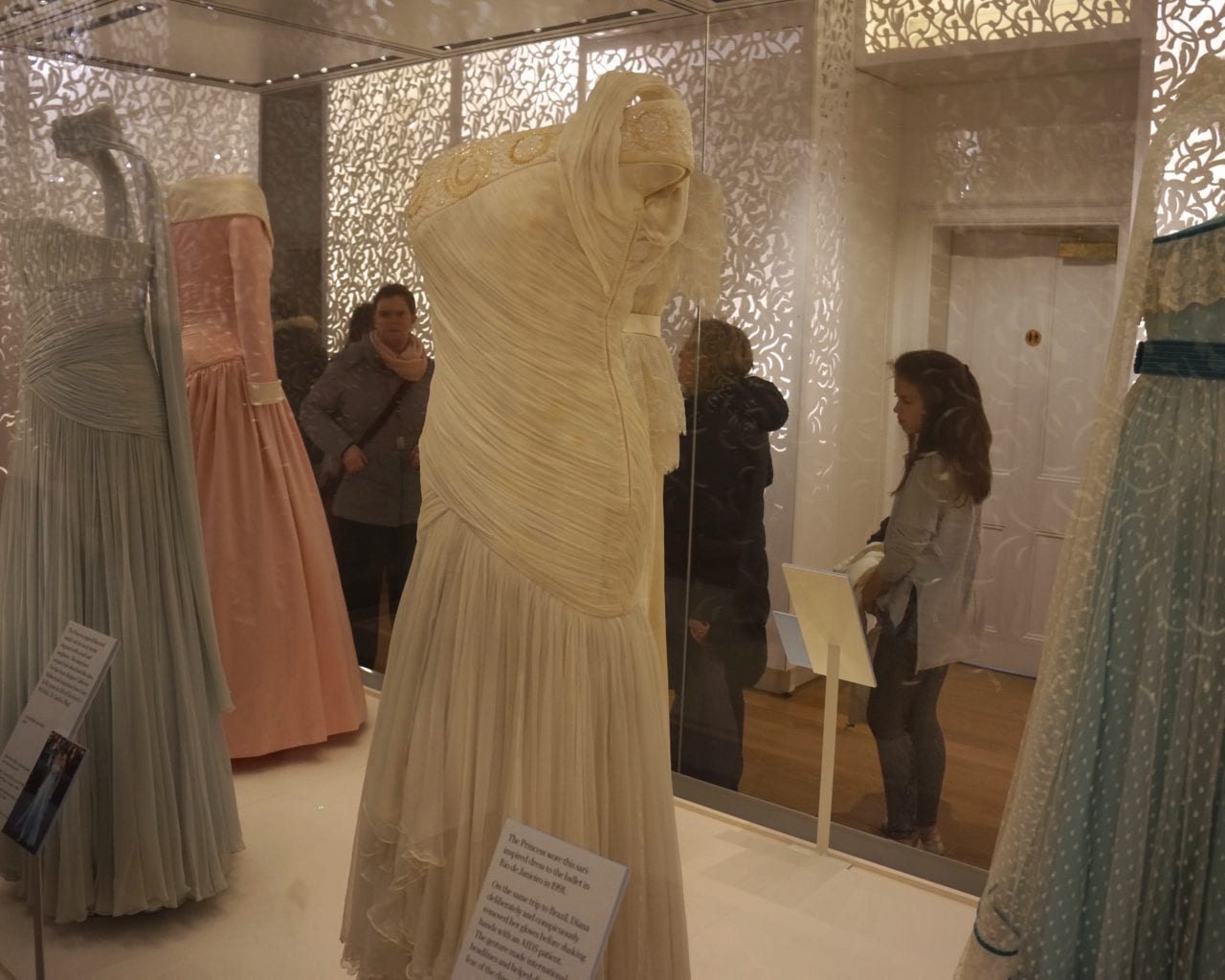 The show had only opened a few days previously, so I expected the exhibit to be very busy. When we got into London, it seemed to be what everyone was talking about. Mr. Anglotopia decided to book a ticket as well since he had not been to Kensington Palace before. We got there about a half hour before the Palace opened and there was already a small crowd gathering. So we stood with about 30 other people in the cold and drizzle waiting for the gates to open. Luckily, we had pre-booked our tickets, so we did not have to wait in line to buy them. We highly recommend pre-booking your tickets for this exhibit as the line to buy your tickets was very long. We were one of the first guests of the day to see the exhibit which was really nice because it was not too crowded. As always with this sort of exhibit, it really is best to go early or go late to avoid the crush of a crowd. 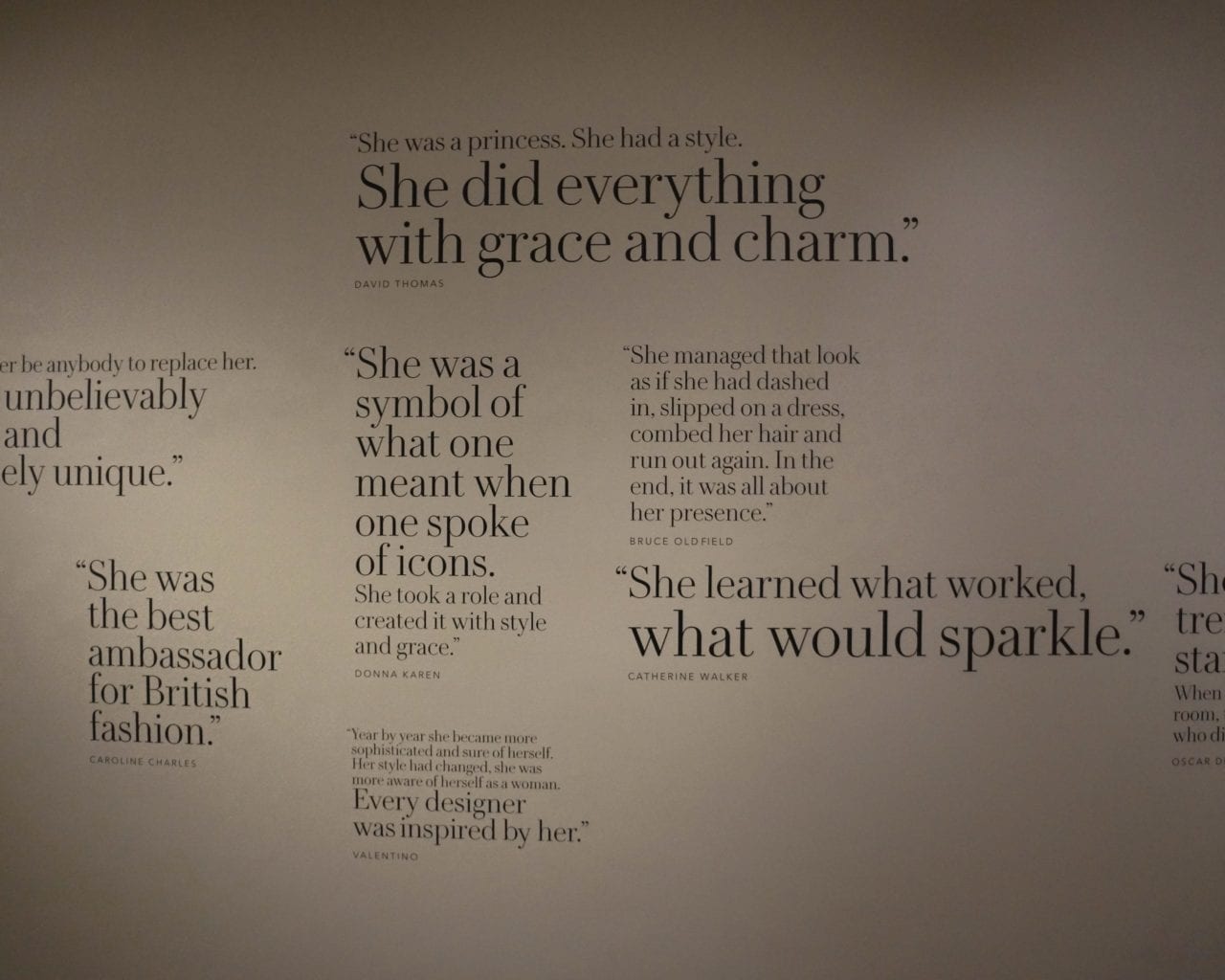 The exhibit was set up to show Diana’s style evolution from young blushing royal to strong, confident woman. The exhibit was well organized in telling Diana’s story and fashion evolution. While there were only 25 garments on display, they really did a wonderful job illustrating her fashion evolution. The first gown that was shown was her “coming out,” gown, worn in 1979 by the designer Regamus. I was struck by the soft of the lines of the gown that almost gave a child-like air about it. The gown exuded delicacy and femininity, The exhibit continued and featured the famous, Diana blouse with ruffles and a bow. While I was a small child when she wore this, I do remember just about every grown woman around me owning a similar shirt after she wore it. This spoke to what a fashion icon, Diana became and how her fashion snapped the fashion of millions of women around the globe. 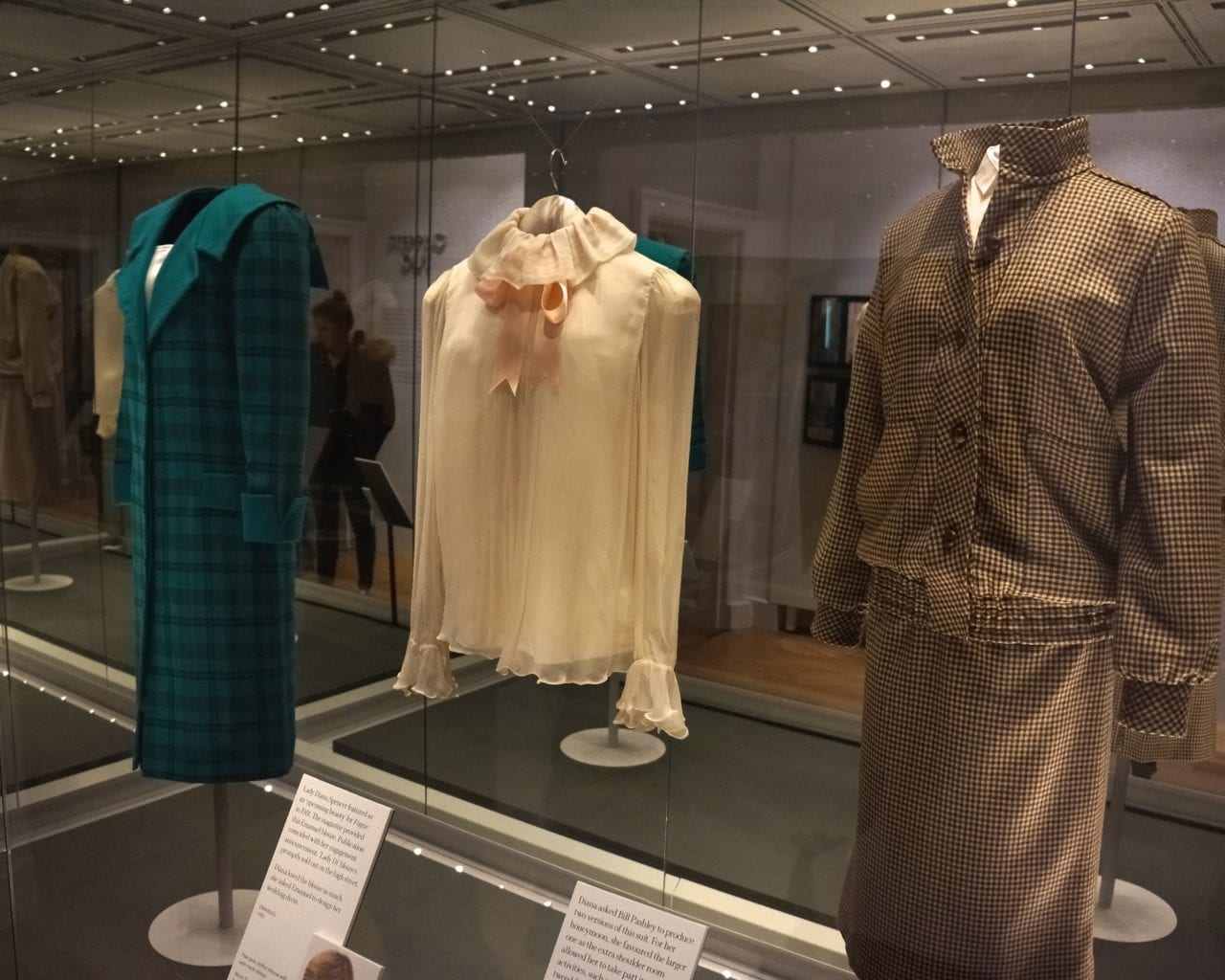 I particularly liked her honeymoon suit, a tweed loose fitting suit. The description of the suit said that it was specially made to be loose fitting so that she could participate in all of the activities that the countryside had to offer. I thought that was really clever, and I felt that it spoke to who Diana was, not merely a pretty show piece but a real woman. The suit was cut to allow her to ride or shoot. I like that it reflected the traditional tweed country suit, but that she put her own twist. While the style now is very dated, it is still a very original piece. I could not help but think that her small frame must have floated in the suit, however pictures of her wearing it show that it fit her beautifully.

One of the most unique pieces in the exhibit was the white “Elvis Dress” by Catherine Walker. To me, it really is such an iconic piece. For some reason when I think of Princess Diana, I picture her in this gown. The Princess commissioned the gown from Catherine Walker for an official state visit to Hong Kong in 1989. The dress really is stunning to see in person, a true work of art. What amazed me about the piece, other than the fact that I was actually standing in front of it, was how heavy the gown alone must have been. It was encrusted with pearls, adding weight to an already heavy gown, not to mention the bolero jacket that went with. How on earth did she manage to move so elegantly when wearing it? 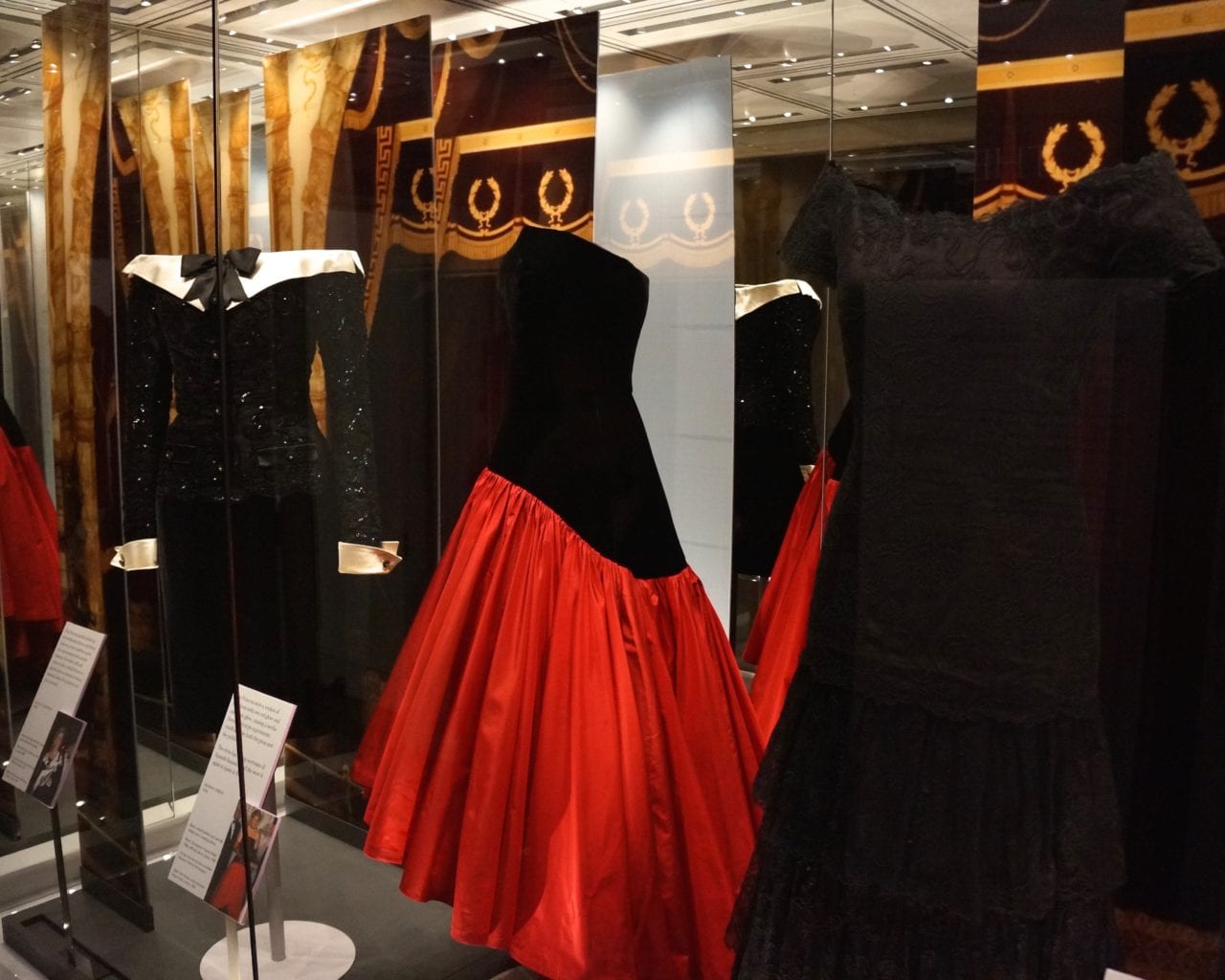 The famous dress she wore when she danced with John Travolta at the White House was also featured. I think once again it was a testament to the designer, that the Princess was able to dance so gracefully in it. The dress must have been heavy to wear as it looked like a heavy velvet fabric. There was also a fairy princess-like pink that she wore, that emulated the dream of just about every little girl, the quintessential Princes’s dress. As the exhibit continued, it was interesting to see the fashion change with the times, to more modern lines. It also showed the working relationship that she had with Catherine Walker, who designed many of the pieces in the exhibit. A few of her most iconic suits that she wore for her charity work were featured as well, The were much simpler, but in my opinion, still truly elegant. 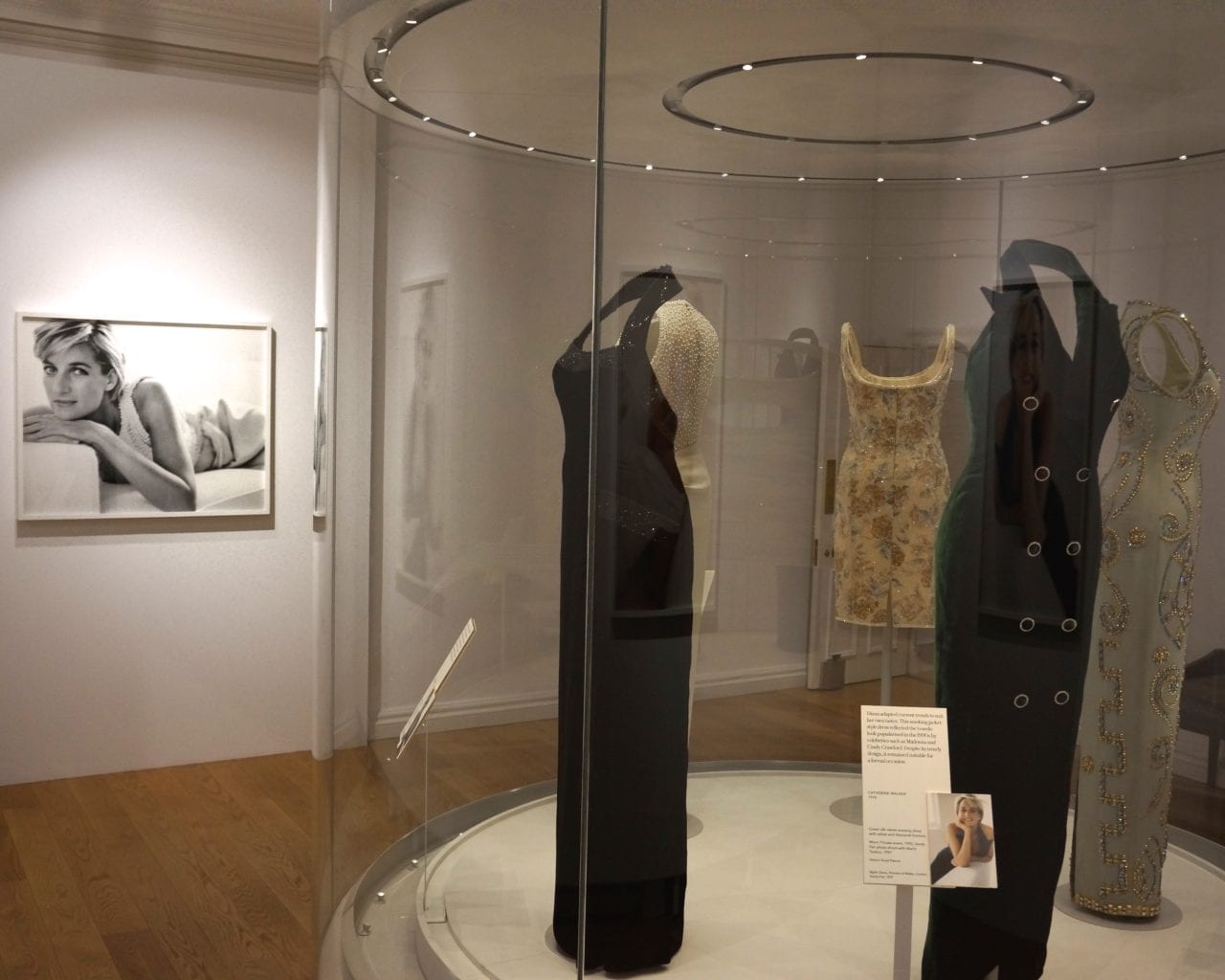 The exhibit ended with a selection of dresses that were worn for the Vanity Fair photo shoot by Mario Testino. I believe that these pieces out of all of the other garments exhibited truly exuded confidence. The showed that Diana, finally knew who she was and where she fit in her own life. It was really inspiring to see. It was neat to see her style evolve, and in a way, it gave me some insight into who she was. I felt that exhibit told the story of her finding her place not only in the royal family but in a life in front of the camera. 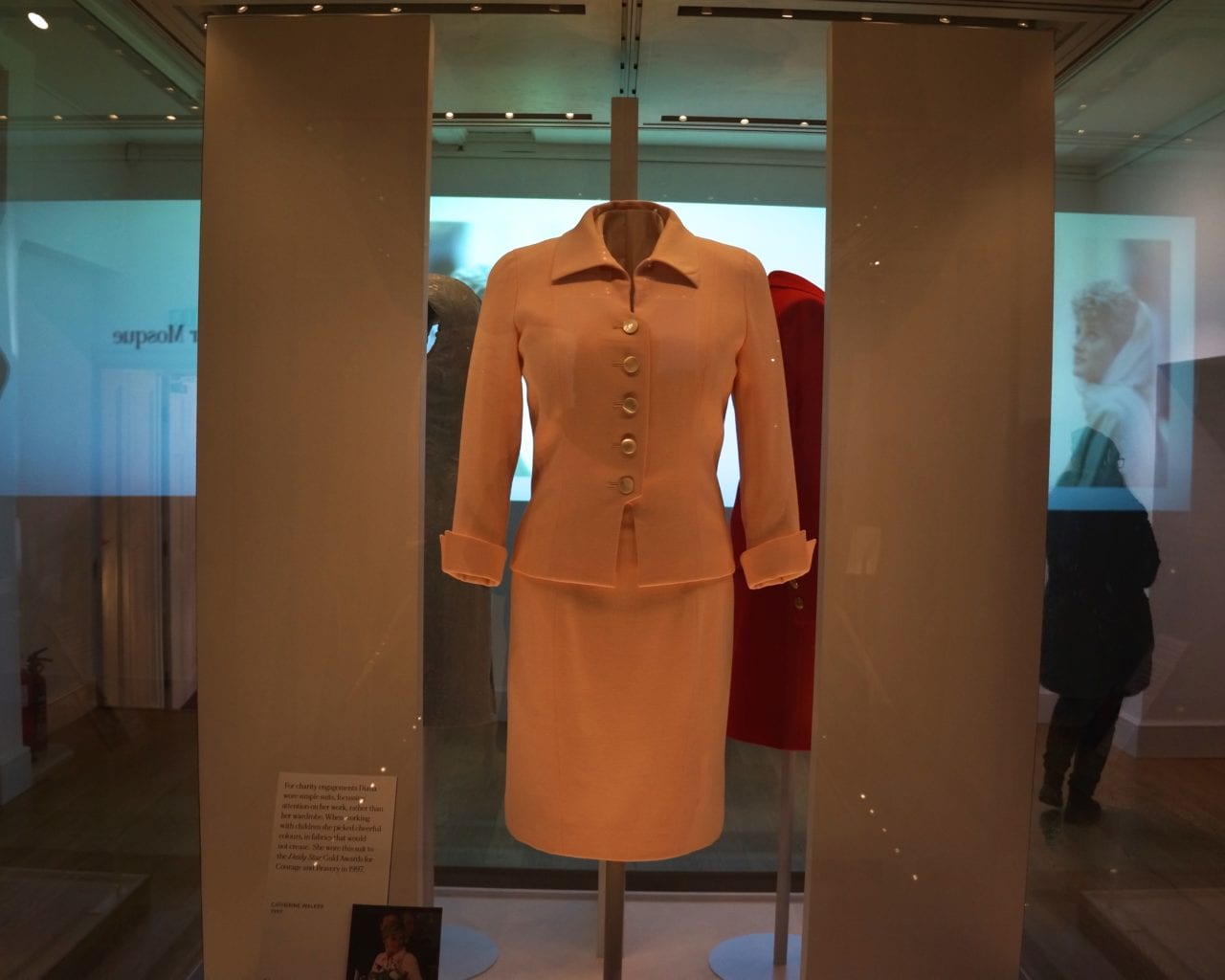 As lovely as the exhibit was, I could not help but feel that the exhibit was somewhat out of place. As much as she was The People’s Princess and was constantly photographed, there was something about the exhibit that just felt slightly exploitative to me. I really think that one dress really drilled home the feeling. There is a lovely emerald velvet dress that was exhibited. The description of the gown was given and where it was worn, but it also mentioned to take notice of the crushed indentations on the side of the thigh, where the Prince’s had grabbed onto their mother’s leg. It reminded me that all of the gowns in the room belonged to a person who was no longer living and had died in a very tragic way.

This was not a particularly large exhibit of her garments, only 25 pieces, but some of her most famous. When we had seen all of the gowns, we left the exhibition to explore the rest of Kensington Palace. As we made our way out, we made sure to stop by the Palace gift shop. I was hoping to buy a few copies of an exhibition book for friends at home. I was sadly disappointed because there wasn’t book that showcased the exhibition. There was not a huge amount of merchandise that directly related to the exhibition but rather to Princess Diana herself. While the items were lovely and tasteful, they were very expensive.

As we finished our trip at the Palace, it began to rain, actually pour so we decided to sit in the cafe for a cup of tea and wait for the weather to pass. Our conversation drifted to the exhibit. I was not surprised to learn that by the time we sat down for tea that the wait to get into the exhibit was over two hours long. However, what did strike me was Mr. Anglotopia’s feeling as well that there was a very odd feeling to the exhibit, while gorgeous, it was sad.

This is a very popular exhibit at Kensington Palace, so you have to book your tickets in advance online. Most of March is already booked up; you must plan far in advance if you want to see this. There may be tickets available on the day, but you will have to wait in a very long line. If you book ahead, tickets are not times, so we recommend going there early. We suggest getting there about a half hour before the Palace opens as there will still be lines to go in and see the exhibit. Most people are currently there to visit this special exhibition so that you will have the rest of the palace practically to yourself – so do visit the other State Rooms. There is a tea room, which is worth a cuppa or you can have a more formal meal in The Orangery.

London Taxi drivers will know where to drop you off if you want to go to Kensington Place. Uber and other private drivers will not (as we learned when we were dropped off at the wrong entrance). The nearest Tube stations: Use District or Circle lines to High Street Kensington or use the Central Line to Queensway. It’s about a 10-15 minute walk through Kensington Gardens, which are beautiful.

Jackie has the unfortunate pleasure of being married to Jonathan - Anglotopia's Anglophile-in-Chief.