You are here: Home / Entertainment / British TV / A Brief History of Thomas the Tank Engine 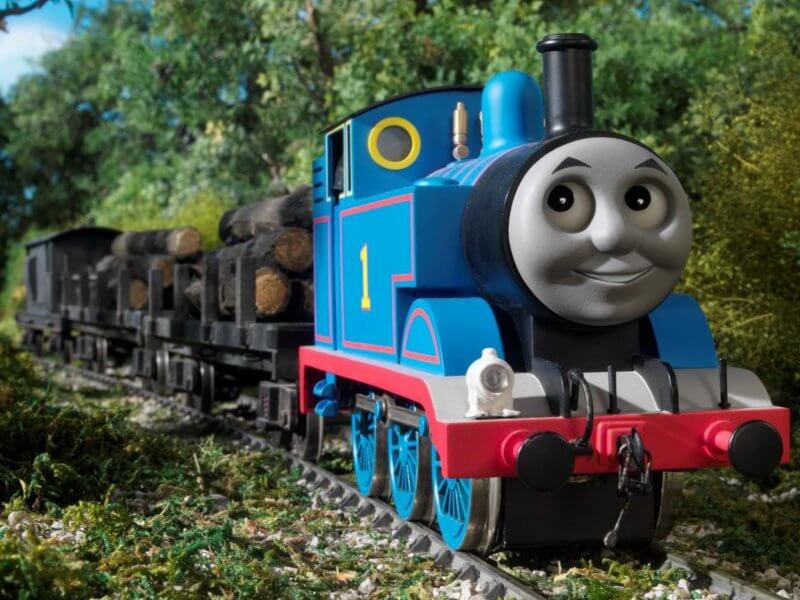 Thanks to shows like Thomas & Friends and Shining Time Station (of which the animated Thomas stories were part), it may seem like Thomas is a more recent part of our cultural past.  However, the origins of Thomas go way back to World War II.  Like many famous characters of British children’s literature such as Winnie the Pooh or Paddington, Thomas was born of a parent creating stories to amuse their child.  Anglican minister Reverend Wilbert Awdry began telling the stories to his son Christopher in 1942 with Thomas being a simple wooden train that belonged to Christopher.

Thomas wouldn’t get his classic look until after Awdry’s wife encouraged him to publish the stories.  The first book, published in 1945, didn’t actually include Thomas.  The Three Railway Engines featured stories about Edward, Gordon, and Henry, who would become staples of the Thomas and Friends series.  Thomas himself didn’t appear until Thomas the Tank Engine in 1946.  Thomas was designed by artist Reginald Payne based upon an E2 Class steam engine picked out by Awdry.  At the start, Thomas was a pilot train who longed for more responsibility by bigger trains like Gordon and eventually proves himself enough to get his own line.

Awdry wrote a total of twenty-six books in the Railway Series until 1972.  His son, Christopher Awdry, had maintained his interest in trains into adulthood, writing several articles for Steam Engine magazine before taking over the Thomas books in 1983.  At the time, TV producers were looking to have additional original stories created as they were in the process of creating the Thomas & Friends television series based on the elder Awdry’s stories.  Christopher Awdry produced another sixteen books through Thomas and his Friends in 2011.  As of 2011 when this last book was published, the franchise’s sales totaled close to £615 million.

Thomas came to the small screen in the aforementioned Thomas & Friends animated series beginning in 1984.  The BBC had tried to adapt the series before in 1953 using model trails, but the live broadcast went off the rails when a failure caused henry to go off the track, and the audience was taken out of the experience when it saw a human hand put him back on it.  It would be nearly 30 years before another attempt was made after producer Britt Allcroft was inspired by a documentary on the Bluebell Railway, a heritage railway that had been featured in Rev. Awdry’s books.

Continuing well into its twenty-second series, Thomas & Friends has been an enduring cultural phenomenon.  Thomas’s adventures have been narrated by a series of big-name celebrities, starting with Ringo Starr and then Michael Angelis as well as Pierce Brosnan for the 2008 film The Great Discovery.  In the United States, the Thomas animated stories were set against a live-action framing device in the series Shining Time Station starring Grease actress Didi Conn.  Starr also appeared on that show for the first couple seasons narrating the stories as well as playing the role of Mr. Conductor.

After Starr’s departure, comedian George Carlin took over the role of Mr. Conductor until the series ended in 1995.  Newer episodes were broadcast beginning in 1998 with Thomas the Tank Engine and Friends featuring Alec Baldwin as the narrator.  The cartoons have moved from PBS to Nickelodeon and now to Netflix.  Thomas’s tracks have reached numerous other countries as well, with the series dubbed into Hebrew, Spanish, Portuguese, Mandarin Chinese, and more.  The lessons taught by Thomas, Henry, Gordon, and more about friendship, perseverance, hard work, honesty, and more have helped to mold and continue to mold generations.