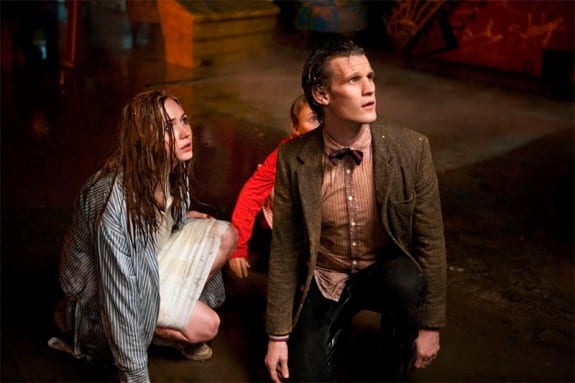 We’ve had a week to get used to the idea of Matt Smith as the new Doctor and this week is our first full on outing without him trying to save the world in 20 minutes.

One thing is for sure – the world is in love with Karen Gillan. At least men are. Oddly we’re getting a lot of traffic of people looking for nude or naked pictures of Karen Gillan. Sorry to temper the desperation by letting you all know they don’t exist! But we have posted a sexy picture of Karen Gillan here (warning NSFW!).

But hey at least we get a whole episode of Amy Pond in her nightie.

The episode was lovely – titled ominously the Beast Below – it’s a fine follow up to the 11th Hour premiere from last week. It picks up right where last week left off with the Doctor and Amy zooming off to adventures together. After proving that the Tardis is indeed a space ship (which is a rathe pervy moment for the Doctor as he looks up at Amy floating above her…), they find themselves floating above The UK. That is the Spaceship UK. As typical with Doctor Who – the Doctor immediately senses that something is not quite right.

The episode is certainly more compact than the previous episode – at least the Doctor isn’t trying to save the world this time – just Britain – future Britain that is. It’s the 29th Century and humanity has been chased off of the Earth by Solar flares and each country has taken to space on massive ark-like spaceships.

The most amusing bit is that Britain still has her Queen – Elizabeth the 10th! Also, we learn rather amusingly that Scotland went off and took their own ship, as they would be expected to. It’s obvious that cracks at Amy’s Scottishness are going to be a feature of the series and that’s fine with me.

My favorite line from the episode is this exchange:

“But you look human,” says Amy.

“No, you look Time Lord,” retorts the Doctor. Awesome.

The writing is really strong as to be expected from Stephen Moffat. The opening titles are growing on me – I didn’t really like them last week and the them song just seemed week – but it’s growing on me and I think I’ll come to like it.

I won’t spoil any more details from the episode as it has a very unexpected conclusion that endears Amy to the Doctor greatly. When all is said and done and they head back to the Tardis – they get a phone call and it’s none other than Winston Churchill – meaning next episode they’ll be going back to World War II Britain – which should be cracking!

The Best Below was a fantastic follow up to Matt Smith and Karen Gillan’s debut and I can’t wait to see where the series goes next.

Stay tuned to Anglotopia for the latest Doctor Who news!