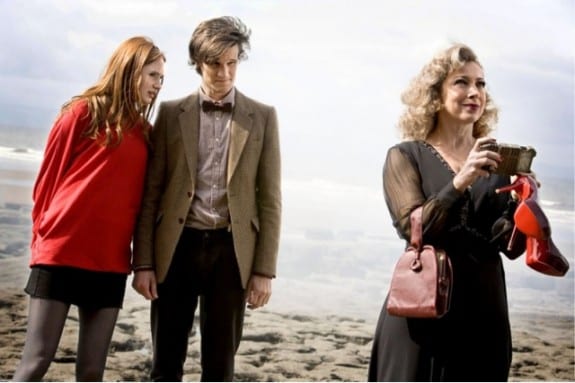 Many fans were disappointed last week with the weak and absurd Victory of the Daleks (but still fun IMHO) so I’m happy to report that Stephen Moffat and crew are back on form this week for the return of the Weeping Angels.

The episode opens with the lovely River Song – living and breathing compared to the last time we saw her – looking fabulous in some kind of 1940’s getup (‘nice shoes,’ my wife commented), who hatches a brilliant plan to get rescued by the Doctor just in the nick of time.

One interesting thing to note is that she instantly recognizes him despite his change in appearance – she later says she know what ALL the Doctors look like, which is very fascinating to think about.

Matt Smith was brilliant in the episode as we see for the first time all the main characters in real genuine danger. The Weeping Angels are not to be messed with and only the Doctor knows that.

Amy Pond is quick to pick up on River’s banter and says “She talks to you like you’re married” – which as someone who is married I could instantly recognize the tone and language myself! River herself hints that they’re married in some future timeline, but says it’s more complicated than that.

It doesn’t take Amy long to get into trouble – and I’m a little disappointed that Amy seems to be just the character following the Doctor around getting into trouble. I do realize that this is the definition of the companion but I think they’re overdoing it a bit this series. Amy is strong and feisty and it’s difficult to see her be feisty in one scene and then totally helpless in the next. They really need to work on that.

One thing to note is that this is a two parter so the story is structured based on that and is a little slow moving at first as the story gets it feet wet. Of course, it ends with an exciting cliffhanger with the promise of more thrills next week.

I know we’ve seen the Weeping Angels before in by far the best Episode of the new Doctor Who – Blink (also written by current showrunner Stephen Moffat). But despite seeing them before – they are still quite a terrifying villain. My wife complains that all we’re seeing is villains we’ve seen before – but I think the Weeping Angels are a good choice as they were only in one episode and there is so much story potential there.

All in all, an enjoyable episode – much better than last week and I’m very much looking forward to part two next week!

What did you think of the Time of Angels? Let us know in the comments!