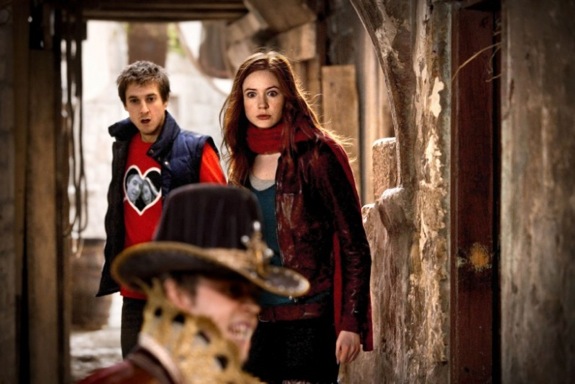 Very good with one problem that permeates every standalone episode so far and I’ll get to that problem.

As has been the trend for every episode this series – the episode starts pretty much right after the last one – this time with the Doctor picking up Amy’s fiance at his Stag (bachelor party) and whisking the couple away to Venice to rekindle their romance (or start is up the first time).

There’s an itneresting love triangle between the three with Rory being quite jealous of the Doctor because of the central role he’s played in Amy’s whole life. There are several humourous moments where the triangle comes to a head and several funny jokes (‘oh yours is bigger’).

As usual, Karen Gillan is lovely running around 16th century venice in a mini-skirt and a stylish scarf. It’s not hard to see why the Doctor and Rory are to taken by  her. It doesn’t take long for her to end back up in a nighty and she also gets soaked with rain at one point. I’m starting to think the writers are enjoying sexing Amy Pond up. I certainly don’t mind.

Rory was very annoying as a character and an actor. Matt Smith was brilliant – he really is settling into the role and starting to stamp his own personality onto it. There are several moments – and some of them are when he’s on his own – that he really shines. It’s really funny when he spots a mirror and checks himself out.

The villian of the episode is becoming a broken record in Doctor Who – the last of a certain race is trying to use Earth to give itself a rebirth. I give this plot point a big sigh. I know Doctor Who is famous for recycling it’s story concepts, but this is getting a little ridiculous. That being said – we’re left with the nugget that the crack in time is becoming more and more important to the course of this series.

This episodes ‘red shirt’ was an African man who lives in Venice, who’s daughter gets taken into the wierd vampire convent (they aren’t vampires, BTW). He’s really a throwaway character and so is his daughter, but they didn’t really need to be and they wouldn’t have if they had gotten 10 more minutes of screen time and some backstory. And that brings me to the biggest weakness of the new Doctor Who series so far: the episodes are too short and it’s starting to show.

Episodes in series 5 are clocking in at under 45 minutes. While this has been the standard episode length since Doctor Who came back in2005, they’re missing an entire act of story and it’s really starting to show. They are skimping on backstory in every episode and leaving much to be desired.

The result has been, while the season has been fun and enjoyable, a weak series with the strongest episode being the two parter because they have more time to tell an actual story.

Vampires of Venice is good, worth watching. Next week looks like a mind bendingly interesting episode. I can’t wait to see ‘Amy’s Choice!’

What did you think of Vampires in Venice? Let us know in the comments!