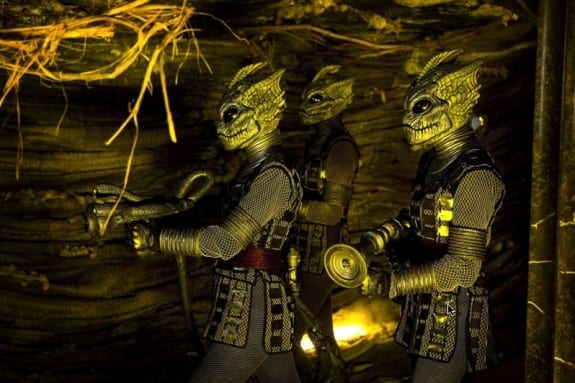 Part two of an exciting two parter that began last week continues this week with Cold Blood. Here’s all the Doctor Who news we were able to round up for the week.

We’re back to our regular schedule this week. We plan to watch Cold Blood live as it airs in the UK, so we’ll have our review written shortly after that. Expect it by mid-afternoon US time.

If you’re going to be travelling to Britain and are interested in seeing sights related to where Doctor Who is filmed, then check out BritMovieTours – a company that specializes in touring filming locations throughout Britain. They offer a 10 Hour Doctor Who Tour that includes:

On this 10 hour intergalactic Doctor Who tour designed for fans of the famous Time Lord we’ll head off from London along the M4 to South Wales by luxury mini coach to where the hugely popular BBC TV series is made.

The Doctor Who tour will take you to many of the key locations that have been used since the show’s return in 2005 in and around Cardiff in Wales.

We’ll also visit the Doctor Who exhibition in Cardiff where you can see many of the props and costumes from the show and pick up a souvenir. You’ll get a chance to have lunch in Cardiff and then take a walk around some of the locations that have been featured in and around the Bay area.

You’ll learn how the show is made, watch the DVD clips as we pass the actual locations, get trivia about some of the stars from the show and get the opportunity to take pictures and see the locations up close. Feel free to get dressed up as the Doctor or his assistant in one of their many costumes (this is purely optional).

At the end of the Doctor Who tour we’ll also send you a souvenir group picture by email. The tour will end at Earls Court tube station.

You can find the dates and prices here on their website.

One of the guest stars in Cold Blood (and the Hungry Earth last week) introduces this week’s episode.

The BBC have released a bunch of clips from this week’s episode and they’re very enjoyable. Light Spoilers but nothing that the previews don’t really give away.

The BBC have released promo pictures from Cold Blood. Click the image to view a larger version.

The BBC have released the details of episode 11 of this series – also known as the episode starring James Corden from Gavin and Stacey.

There’s a house on Aickman road, and a staircase that people go up, but never down, as the time-travelling drama continues.

To solve the mystery of the man upstairs, the Doctor faces his greatest challenge yet – he must pass himself off as a perfectly normal human being, and share a flat with Craig Owens.

The Doctor is played by Matt Smith, Amy Pond by Karen Gillan and Craig Owens by James Corden. This episode is written by Gareth Roberts.