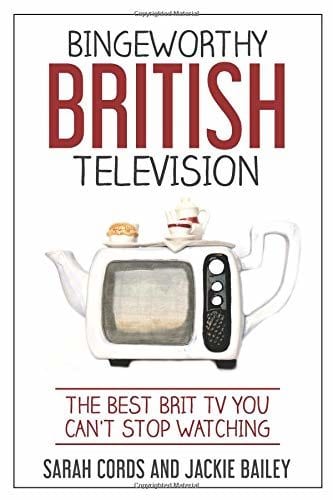 The market has desperately needed a book that’s a wonderful guide to British TV, and it finally has it with Bingeworthy British Television by British TV blogger Sarah Cords and her friend Jackie Bailey.

I’ll admit, when I started going through this book, it made me kind of mad. I had an idea for a similar book in a similar format years ago and even began writing it but abandoned it when Anglotees took off as I didn’t have time to write it (this was like 5 years ago). So, I’m pleased to see that Sarah has written this book and done a better job than I ever could have done.

Sarah is a British TV addict; you should really check out her blog here and has a long history as a British TV viewer. She’s taken that knowledge and turned it into the perfect guide. This book is perfect for veteran Telly watchers, but it’s ‘beginner’ telly watchers who will find this book to be the most useful.

Sarah has divided the book into several sections – British Comedies, Dramas, Historical Dramas, Crime Dramas, Historical Crime Dramas, Literary adaptations, and few other bits and bobs. Each section then summarizes her favorite shows in that category. This is where the real meat of the book is. Each entry covers basics like runtime, creator, and writers, what it’s about, why it’s binge-worthy, the cast, trivia and then what to watch next if you like it.

She does a great job summarizing a lot of basic information, which to be honest, you can get easily online these days. But it’s nice to have in one place and she adds her own flair to each entry. She also presents each show in context to the rest of British TV, which is very informative. After reading through this book, I came away with a list of shows that I haven’t yet watched and then immediately went to start viewing them. So, thanks to Sarah, now I’m addicted to Monarch of the Glen. You’re to blame!

Another great thing about the book is that Sarah has engaged a ‘resident Brit’ Jackie Bailey to help give great overviews of British TV and some basics that many fans might not know – like why are seasons so short? What’s the license fee? Stuff like that. The television industry in Britain is fundamentally different than Hollywood and Jackie does a great job of painting an accurate picture of what exactly that is.

A book like this, of course, is very subjective in regards to what shows to include and what to exclude. I’m happy to report that I agree with most of Sarah’s choices and think you would find many of them on any ‘Top 100 list’ of British TV shows. There are a few you might not know about – I know I learned a few things. And it’s not just old British TV shows – there’s a mix of classic shows, more modern shows (like since 2000) and also a rundown of some very new shows – like the smash hit Bodyguard.

The only thing I wish the book had was a listing of where you can watch these shows. Like which streaming service, DVD’s, etc. Though, I realize this information would immediately be out of date in a book as it’s constantly changing. The information is very hard to find on your own. For instance, I wanted to watch Monarch of the Glen. I checked BritBox, not there. I checked Amazon Prime, not there. I checked Acorn TV, not there. I checked Netflix, not there. Apparently, it’s only currently available on DVD. After watching the first few episodes, I’m not sure why none of the services have this show – it’s fantastic!

We’re living in the golden age of watching British TV, and Bingeworthy British Television is the perfect guide to that.