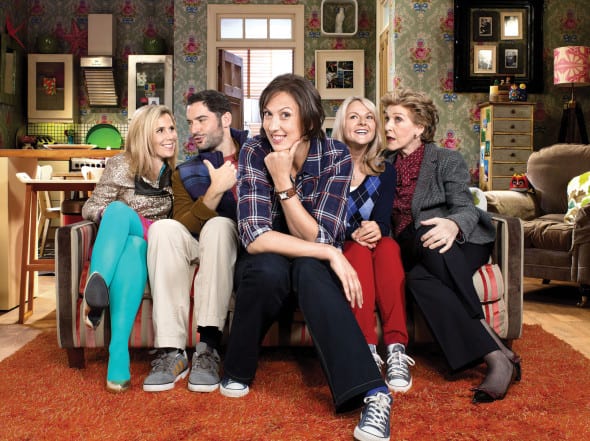 You know Miranda Hart, don’t you? She’s the 6’-1” British actress who many recognize as Chummy on the internationally successful BBC series “Call the Midwife.” Her presence on this show brought a bit of humor to the early seasons of the ultra-serious show as well as a much-needed romantic subplot that viewers cheered on (the shy, awkward midwife falls in love with PC Peter Noakes, played by Ben Caplan). If you recognize Miranda Hart only from her work on “Call the Midwife,” you might not know that she is actually a loopy British comedienne who is completely unintimidated and is willing to try anything for laughs.

Born in 1972, in Torquay, Devon (which, to British comedy aficionados, is the location of Fawlty Towers), Miranda comes from a line of aristocrats – barons, marquesses, earls and dukes – that goes back to the 12th century. She was educated in boarding school (if you watch her sitcom, “Miranda,” you’ll see evidence of this background in play), attended the University of the West of England and on to the Academy of Live and Recorded Arts.

She jumpstarted her career in entertainment by writing for the Edinburgh Fringe Festival. A producer for the BBC, who had seen Miranda at one of the Edinburgh shows, invited the comic actress to pitch an idea for a comedy program and this was the beginning of Miranda’s sitcom, “Miranda.”

But, before the sitcom was approved, Miranda began testing the show as a radio program, called “Miranda Hart’s Joke Shop” (this is available for purchase on Audible.com and on CD at Amazon.com). While she was working on the radio program, she received word that the BBC had commissioned a full season of the sitcom. At this point, Miranda admits that she put a “huge amount of pressure” on herself because, as she explains in her book, The Best of Miranda: Favourite Episodes Plus Added Treats, “I didn’t want to let TV audiences down, myself down, the BBC down and blow the opportunity.”

There was one other pretty significant issue: she had never written a sitcom before! As she explains: “I was on a gigantic learning curve. There were so many technicalities to it. Every story was like a jigsaw puzzle, one thing went wrong or didn’t connect and it would fall apart like a house of cards….Sitcoms are a deeply complex beast.”

She locked herself away to create the six episodes of the first season, consulted books that were not much help, and eventually learned the mechanics of sitcom writing. But, she says she had to “subvert them, put my own twist on it, how I would make my own particular rules for my own particular show.” There were weeks spent on idea creation, months on story plotting, more time writing long and cutting short, still more effort polishing jokes that she knew could easily fall flat in front of an audience. Clearly, Miranda suffered for her art!

But, if she suffered, we are the beneficiaries of that suffering. “Miranda” ran for three seasons (beginning in 2009) in addition to a few Christmas specials and there are now rumors afoot that she may be ready to bring back the much-beloved characters for more crazy and hilarious antics after her self-imposed hiatus at the conclusion of the series (a finale that aired in 2015).

For those unfamiliar with “Miranda,” the series is about her alter-ego Miranda’s antics as a single woman who owns and sort of operates a joke shop (sharing that duty with her business associate Stevie, portrayed by the small girl with the big voice, Sarah Hadland); Miranda is sort of in love with her university friend Gary (portrayed by the handsome and extremely lovable Tom Ellis) but is too shy to admit it; and she is most definitely controlled by her annoying mother Penny (portrayed by Patricia Hodge, most recently seen on “Downton Abbey”). In all the best ways, the show is reminiscent of “I Love Lucy,” the classic American sitcom from the ‘50s starring that madcap redheaded comedienne, Lucille Ball. There’s verbal humor, physical humor and even some social commentary. But Miranda’s show goes one step further: she breaks the fourth wall…meaning, she’ll stop in the middle of a scene and talk to the camera (you, the audience) and then pick up again when she’s through with her internal monologue.

In “Miranda,” Penny wants her daughter to be married and will go to any lengths to make this happen, from standing on the street with a sign offering Miranda to the first man who shows interest, to holding Pride & Prejudice dress-up affairs with the hope that Miranda will find her Mr. Darcy. In between these awkward attempts to find Miranda a mate are conversations about what she and Miranda’s dad (Tom Conti) are doing in their newly-built Jacuzzi. Meanwhile, all Stevie wants is for Miranda to take her business seriously. Yes, they sell chocolate-shaped penises and other weird tchotchkes but someone’s got to organize these items and put them away…and it’s never going to be Miranda! That’s because Miranda is too busy trying to take her friendship with Gary to the next level. But when put to the test, she is too awkward or embarrassed or shy to do anything about it so the two remain close friends…and that’s about it, which frustrates the hell out of Miranda.

Through the course of three (too-short) seasons, plus a couple of Christmas episodes and a two-part finale, you can’t help but laugh and cry your way through Miranda’s adventures. This is truly Miranda Hart’s voice, as she has written every episode in addition to starring in the series. She’s zany, funny and unintimidated; she isn’t afraid to put herself into any compromising position, from getting stuck in a child’s chair to dancing in a nightclub despite losing her trousers, to walking into a business meeting with half of her skirt torn away, to falling onto a rotating sushi bar. She makes fun of people without being too horrendously mean. And, her pain at her unrequited love for Gary is something we all can identify with.

The show was tremendously popular across the pond. It was nominated 18 times for a litany of awards, including BAFTAs for Miranda as Best Female Performance in a Comedy Programme and Best Situation Comedy, and won several British Comedy Awards (for Best Actress) and a Royal Television Society Award for Best Scripted Comedy, among other accolades.

Check out this show and you’ll be rewarded with hours of entertainment because “Miranda” is funny and sweet and emotional. “Miranda” is now streaming on Hulu and Acorn TV, so get over to one of these sites immediately and start watching it!

To paraphrase Penny, “It’s what I call…a wonderfully funny show!”

About the Author – Janna Wong Healy

Janna has spent her entire life around the written word, editing books, writing magazine articles on a variety of topics and working in the film industry on such movies as “Star Trek II: The Wrath of Khan” and “The Day After.”  She spent years as a story analyst for studios and production companies and has written more than 150 menu decks for movies and television series on DVD for Universal Studios Home Entertainment. She wrote about casual gaming for The Clik/Character Arcade, is a featured blogger on Blogher.com and a professor of Business Communication in USC’s Marshall School of Business.  Her novels, “Mariana Wong’s Summer of Love” and “Let’s Get Lost,” are available on Kindle.