You are here: Home / Entertainment / British TV / Dreams of Britain: It All Started with Two Fat Ladies 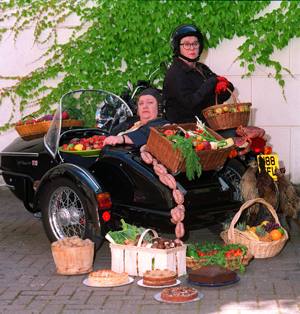 Many moons ago. Well, the late 1990’s to be exact. There was a cooking show on cable called Two Fat Ladies. I wasn’t particularly interested in the food. I’ve pretty much always been interested in Britain even before I knew what the word Anglophile meant.

So, what piqued my interest about the show was that it was an English cooking show with two lovely English ladies as the hosts. Every week they rode their old Triumph motorcycle to a new location and cooked an elaborate meal. I was more interested in the scenery than the food. Not only that, the Two Fat ladies that were the hosts were charming and hilarious. It was a very calm and subdued show. You could say that it was almost zen-like to watch.

My mother introduced me to the show and we watched it together whenever we could. My mother is not near the Anglophile that I am, but she’s pretty into Britain herself. We caught the show whenever we could and dreamt of one day visiting England ourselves. The show wasn’t on for very long and we were saddened to hear not long after that one of the Two Fat Ladies, Jennifer Paterson, died after the last episode was filmed.

One day, we got a brochure in the mail. Normally we threw away the junk mail but my mom showed it to be and it immediately caught both our interests. It was a brochure for a package vacation to Britain to some place called Birmingham. The price was really cheap and we decided that this would be a good time to maybe plan a trip to Britain. I was graduating from High School soon and it would be my graduation gift.

After much calling around and research, we decided that Birmingham wasn’t quite right for our first trip to Britain so we booked a similarly priced package deal to London for a week. We were to leave right after school let out in June.

The months that follow the booking were a blur as we ran around trying to get passports for the first time and finding the necessary luggage. My mother and I were so excited to finally be going to Britain. We were going to see the land of the Two Fat Ladies. I could barely sleep at night because I was so excited.

The story of my first trip to London will be for a future Dreams of Britain Post. In case anyone was curious, the great folks at Acorn Media have put Two Fat Ladies on DVD for the first time. It includes the whole run of the series (24 episodes in total) and a bunch of extra features. I’m definitely going to pick this up for my mother and promise to watch it with her for Mother’s Day. She deserves it – after all she took me to London twice.