You are here: Home / Entertainment / British TV / Tellytopia: A Brief History of Gavin and Stacey 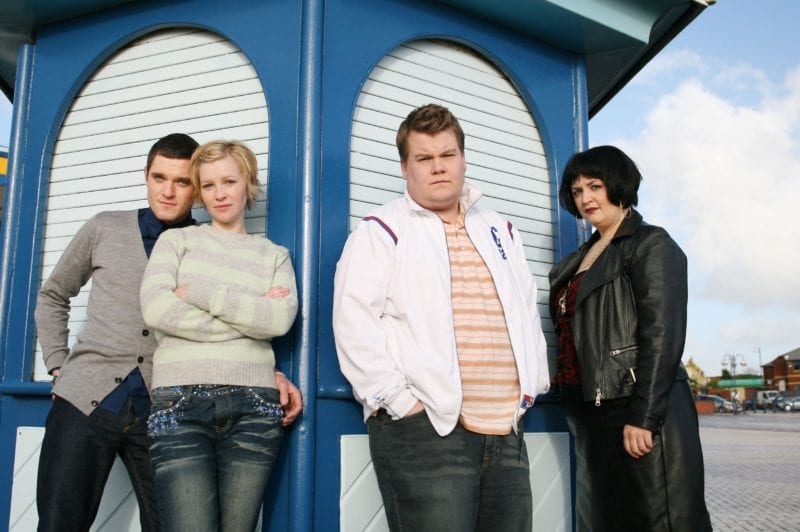 Twelve years ago, audiences were treated to a romance for the ages.  A story of divides both geographical and cultural, Gavin Shipman of Essex and Stacey West of Barry’s Island, Wales, managed to meet and fall in love.  Riding the roller coaster that many relationships can be, they made it work for twenty episodes and specials from 2007 to 2010.  With Ruth Jones and James Corden set to bring back the show for a Christmas Special this year, let’s have a look back at the trials and tribulations of the characters and the show itself.

Of course, the story of Gavin & Stacey begins well before 2007 with the show’s creators.  James Corden had been in acting since he was 18 but found fame with the 2000 show Fat Friends and later the play and film adaptation of The History Boys.  It was during the filming of Fat Friends that he met co-star Ruth Jones, who had been in TV and radio comedy for BBC Wales and theater roles until Fat Friends came along.  Corden got the idea at the wedding reception for his friend Gavin, who had married a girl from Barry Island, Wales.  The wedding was apparently pretty crazy, and Corden related everything to Jones, who was from Cardiff.  “I told her I didn’t think anybody on TV had shown a wedding like the one I’d been to”, he said about the inspiring event.

The two started working on the basics of the show at the bar where Fat Friends cast and crew would hang out after filming.  Characters for the show, then planned as a one-off special, were based on people they’d see in the bar.  “We used to sit in the bar and look around.  There was always a function going on, and we’d pick our characters that might be in Gavin and Stacey’s wedding and improvise what they might say.”  Corden and Jones wrote themselves in as the couple’s best friends, Smithy and Nessa, and pitched the idea to the BBC.  The result they got back for their pitch was more than they’d expected, as the Beeb informed the writers that they didn’t have a spot for a one-hour special and instead suggested they chart the relationship back to the first meeting and make a proper series of it.

The show then cast Matt Horne as Gavin and Joanna Page as Stacey based off the chemistry they showed together during auditions.  Corden sent Horne a text congratulating him on the role, and then the two talked on the phone for eighty minutes, leading the two on-screen buddies to become real-life friends.  The show debuted on BBC Three, but it wasn’t long before the broadcaster commissioned a second series and everything moved over to BBC Two and then BBC One, where its audience really picked up.  Gavin and Stacey debuted to an audience of nearly 550,000 and ended its run on BBC One with numbers over ten million.

Throughout the process, success almost seemed baffling to Corden and Jones.  As Jones has stated, “We never intended to write a second series, let alone a third.”  Yet with each series, the two have been able to explore different aspects of the relationship, with the first series focused on the trials of their courtship, the second featuring the newly-married couple living with Gavin’s parents, and then moving back to Wales and trying for a baby in the third.  As recent as three years ago, Jones said there were no plans to bring the show back, but in planning for the new Christmas Special, Corden related that he felt he “owed it to the characters” to “see what they’re doing”.

As of yet, both Corden and Jones have been pretty tight-lipped about what direction the story will go, though Corden has said it will be “a nostalgic joy-bomb”.  So until Christmas rolls around, we’ll just have to speculate about what the future holds for Gavin, Stacey, Smithy, Nessa, Uncle Bryn, and the rest of the Shipman and West family and friends.  Here’s to hoping for a “tidy” story that reminds us why we fell in love with the show.