You are here: Home / Anglophilia / The Top 12 British Comedies of All Time – Best Britcoms With Clips! 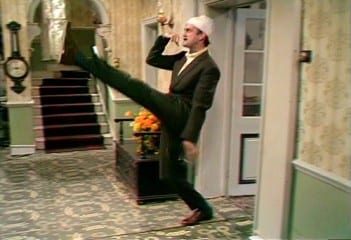 Editor’s Note: The following is an excellent guest post from writer Garry Berman – author of the fantastic book Best of the Britcoms, an excellent guide to history’s best British sitcoms. Thanks Garry!

Just over ten years ago, my book Best of the Britcoms was first published, celebrating fifty of the finest British sitcoms to cross the Atlantic and grace our American airwaves. It was a labor of love, and I had the pleasure on interviewing many of the writers, actors, directors, and producers of Britain’s most accomplished sitcoms. The revised and updated edition of Best of the Britcoms has just been published, with seven new chapters featuring programs that have aired in the U.S. since 2000. And yet, Anglotopia has asked me to choose just ten of my all-time favorites. Despite the honor, I must acknowledge my inability to limit the list to ten, and offer my list of Ten (Plus Two) All-Time Favorite Britcoms.

A shamelessly silly, fast-paced, and hilarious farce set in German-occupied France during World War II. Cowardly cafe owner Rene Artois finds himself caught up in a myriad of elaborate but harebrained schemes concocted by the French Resistance, as they try foil the Germans’ war operations. Gorden Kaye as Rene leads a large cast of 18 eccentric characters through this sprawling mix of cleverly absurd dialogue and uproarious slapstick. The sheer comic inventiveness of this show can be breathtaking.

Set in a suburban leisure centre (i.e. a health club/recreation facility), this series may not be well-known in the U.S., but in its day it was referred to as the Fawlty Towers of the 90s in the U.K. This compliment was not only warranted, but I consider Brittas the better of the two series. Chris Barrie stars as Gordon Brittas, the hands-on but disaster prone manager of the centre, who unwittingly drives his staff and clientele to near rebellion with his well-meaning but interfering ways. But the employees have their own foibles, too. A typical episode will have several unrelated predicaments converge for a climactic moment, which often involves an explosion or two.

A comic masterpiece, courtesy of Ricky Gervais and Stephen Merchant. This follow-up to their breakout series The Office features their signature comedy-of-the-awkward-pause, but in a fresh context. Gervais plays struggling actor Andy Millman, who works as an extra while waiting for his big break. This comes when he sells his sitcom pilot to the BBC, but his creative vision is tampered with to such a degree that he finds himself conflicted between seeking fame and fortune, and his own personal integrity. Ashley Jensen is brilliant as Andy’s platonic pal Maggie, and Merchant is a scream as his incompetent agent. Lots of A-list guest stars play warped versions of themselves as well.

The inner workings and double-dealings that go on within the British government may not sound like the best fodder for a sitcom. But writers Anthony Jay and Jonathan Lynn combine their superb skills to give us a genuinely funny series that pokes fun at bureaucracy at its most outlandish. Paul Eddington stars as Jim Hacker, the Minister for Administrative Affairs, who finds his efforts to curb government waste perpetually foiled by Private Secretary Humphrey Appleby (Nigel Hawthorne). Humphrey revels in creating bureaucratic red tape and, when need be, easily confounds Hacker with barrages of dizzying double talk. The dialogue demands that viewers pay attention, but the laughs come at a steady clip. When Hacker becomes Prime Minister, the series smoothly turns its satire to world affairs.

A conventional but utterly charming and endearing domestic sitcom from the mid-1970s. Tom Good (Richard Briers) has dropped out of the rat race to pursue a life of self-sufficiency. His adorable wife Barbara (Felicity Kendal) supports him through thick and thin, as they work to grow vegetables and raise livestock in their backyard. But their next door neighbors, Jerry and Margo Ledbetter (Tom’s former colleague and his snobbish wife), often find their patience strained by the Good’s unconventional and somewhat hygienically-challenged lifestyle. Their close friendship survives many tests.

6. The Vicar of Dibley

Dawn French stars in this virtually perfect sitcom as a lady vicar, who turns the quiet village of Dibley upside down with her zest for life, bawdy sense of humor, and genuine affection for its inhabitants. But she finds herself constantly butting heads with David Horton, the stuffy chairman of the motley town council. Dawn French demonstrates a talent that her former comedy partner Jennifer Saunders seems to lack, i.e. playing a true-to-life, very human character, as opposed to an over-the-top caricature. French is superb, as are her cast mates. Created and co-written by the prolific Richard Curtis (The Blackadder, Four Weddings and a Funeral, Love Actually).

7. Are You Being Served?

A staple among PBS affiliates for years, this show treats us to the dilemmas, schemes, and endless double-entendres exchanged among the sales staff of Grace Brothers department store. Each episode is rather thin on plot, preferring instead to concentrate on the colorful characters as they deal with customers as well as each other. Their wonderfully easy chemistry shines through in every episode. John Inman as Mr. Humphries is often singled out, but my favorite has always been Trevor Bannister as the fast-talking, wisecracking Mr. Lucas.

A daringly irreverent sitcom by American standards (it was literally banned in Boston). A trio of Irish priests– Father Ted Crilly (Dermot Morgan), his imbecilic younger colleague, Father Dougal McGuire, and the elder, perpetually inebriated Father Jack Hackett. They have a knack for indulging in various schemes that can be somewhat less than holy, and tend to result in the priests inadvertently humiliating themselves in public. The series boasts surreal black-out gags, ludicrous dialogue, and an anything-goes comic sensibility treats many sacred institutions as fair game. But the comedy here is too absurd to be taken seriously, if you know what I mean.

9. The Fall and Rise of Reginald Perrin

The great Leonard Rossiter’s most memorable role, as a harried dessert company executive on the verge of a nervous breakdown. His lightning fast delivery and jittery mannerisms perfectly convey a man becoming unraveled by life’s pressures. After faking his own death and traveling in disguise for a while, he returns home to embark on a series of bizarre new business ventures. A true classic.

The winner of a dozen television awards, this deceptively simple sitcom actually boasts several innovations in both its storytelling and production. Curmudgeonly Victor Meldrew (Richard Wilson), forced into early retirement, must find ways to keep himself occupied each day. But as he and his long-suffering wife Margaret try to lead a quiet life (that is, when Victor isn’t at war with neighbors, store clerks, and the rest of the world), they find themselves regularly entangled in the most macabre of comic situations and misunderstandings. David Renwick’s intricately plotted scripts–which often allow the characters to react to plot twists before we viewers are made privy to them–are ingenious, to say the least.

This wildly imaginative cult favorite successfully blends the best of comedy and science fiction as no program has done before or since, on either side of the Atlantic. The series takes place 3 million years in the future, aboard the huge spaceship Red Dwarf. The ship is manned only by David Lister, his cat in human form (long story), Holly, the ship’s computer, Kryten, a mechanoid, and, in hologram form, the late Arnold Rimmer, who had inadvertently killed the entire crew, including himself, many moons ago (Lester’s erstwhile girlfriend Kristine Kochanski joins the show as a regular in its later series). The comedy can be silly, sometimes crude, but always fabulous, as the gang wander through the galaxy meeting new life forms, traveling through time dimensions, and playing juvenile pranks on each other.

This series is just about to appear for the first time in the U.S. on a few PBS
stations, and hopefully it will get the widespread attention it deserves. It takes a simple premise, the day-to-day life of an average married couple and their young children and creates a semi-improvised comedy of amazing realism. The three kids keep their chronically exhausted parents forever on their toes with an onslaught of hard-to-answer questions and refusals to eat their dinner. Their rapport is so natural, you’d swear you’re eavesdropping on a real (and very funny) family. Keep an eye out for this award-winning gem.