You are here: Home / British History / Brits Sneer at the Very Premise of ‘Anonymous’ – Videos 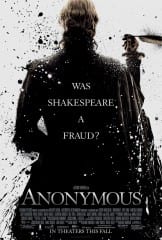 Britain is rather annoyed at the American movie opening today around the world that posits that William Shakespeare didn’t write his plays. We’re firmly in the ‘wrote his plays’ camp – the theory that he didn’t has been debunked again and again.

But it still could make an interesting movie.

Here are some British TV news reports about this film.

A new film, ‘Anonymous’, is attempting to question the authenticity of William Shakespeare’s works. It credits the Earl of Oxford – an Elizabethan courtier – with being the real Bard.

What do you think? Will you be seeing Anonymous?