You are here: Home / Entertainment / British Movies / Dispatches from England: Following in Paddington Bear’s Shoes In London – A Paddington Tour of London 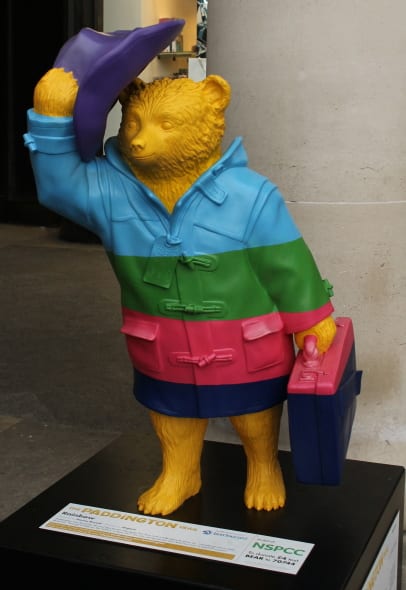 Since the movie was released here in the UK in late November, Paddington Bear has been all the rage (at least among young children… the segment of the population I’m most familiar with!) Last month, my family thoroughly enjoyed a trip to the cinema to see the film (as you’d say here). I’ve always adored the books, but it was so fun to see the story come to life on the big screen. I hope Paddington’s newfound popularity lasts for a long time.

I think my favorite aspect of the movie, though, was seeing some of my favorite places in London featured so prominently in the movie. Indeed, a few days later we took a day trip into the city and saw several of the Paddington statues that were set up as part of the Paddington Trail. Unfortunately that was a temporary exhibition and most of the statues have now been taken down. But I thought it might be fun to put together a list of London attractions closely connected to the story of Paddington Bear.

Paddington Station. You should begin where Paddington began his London adventures. He arrived on a train in Paddington Station and waited on the platform until the Brown family offered their help.  While not particularly worth a trip just to see the station (unless you love train stations), you can catch a train to Windsor, Bath and Oxford, among other places, for a fun day trip outside the city. Or just plan to take the Heathrow Express into or out of the city to catch your flight. At 30 minutes, it’s the quickest way to the airport from London’s city centre.

Portobello Road Market. In the movie, Mrs. Brown takes Paddington to an antique shop along Portobello Road to identify the origin of his famous red hat. Mr. Gruber’s Antique Store is actually Alice’s Antiques, located at 86 Portobello Road. The entire stretch of Portobello Road is a lively market each Saturday, with an enormous selection of antiques and collectables.

Buckingham Palace. In many of the promotional pictures for the film, Paddington is standing in front of Buckingham Palace. While he doesn’t spend much time there in the movie, there is one memorable and heartwarming scene with this famous backdrop. I just don’t advise you try to stand right next to one of the guards as he does.

Marmalade Sandwiches. Everyone knows that Paddington survives on marmalade sandwiches. Fancy trying one yourself? Head to Borough Market, one of my favorite spots in the city. You’ll be surrounded by delicious food, as this is the largest food market in the city. The market’s website outlines where you can pick up all the ingredients you’ll need to recreate Paddington’s favorite food: Borough Market’s Ultimate Marmalade Sandwich. But if you’d rather just pick up a jar of orange marmalade to bring home, then I’d recommend Fortnum & Mason, one of London’s oldest and most prestigious stores. They sell an amazing array of British food products.

Shopping. No Paddington adventure would be complete without a souvenir. Hamley’s, London’s premiere toy shop, has a huge selection of Paddington Bear toys. Here you’ll be in the thick of the London shopping scene along Regent Street. Or go where it all began, Selfridge’s department store, on Oxford Street. The character of Paddington Bear was inspired by a teddy bear purchased at Selfridge’s by the book’s author, Michael Bond, for his wife.

Nicole Wiltrout is an American who spent 3 years living in England with her family and every week she wrote a Dispatch from England for us. While her column has ended we have compiled them into a beautiful book. It is available in print and ebook from major retailers. Full Details Here.