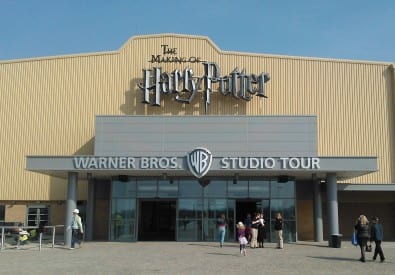 Anglotopia London correspondent Laura Porter from the About London blog was kind enough to write up a detailed review of the new Harry Potter Studio Tour Experience.

This is the actual film studio where the Harry Potter films were made and is opening to the public for the first time on 31 March 2012. The creative team behind the films helped put together the tour and this is not a theme park as they didn’t want rides to overshadow the authentic film sets on display. Literally everything on display is original and was used in the films.

No tickets are available to buy from the attraction so you must book in advance on the official website or through an approved operator. You must arrive 20 minutes before your entry time and will not be allowed to change times on the day.

Getting to Warner Bros Studio Tour 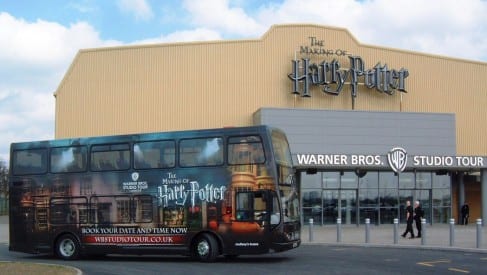 While this is being classed as a London attraction it is actually 20 miles northwest of London. You can drive here as there’s plenty of free parking but the recommended way is to get the train from London Euston to Watford Junction.

There are two train options:

Watford Junction station has public toilets and a basic shop for snacks.

You can take a taxi from right outside the station for around £10 one way.

Turn left as you exit and there is a regular ‘Harry Potter bus’ from Stop 1 in the bus station for £2 return (under 5s go free). See the full timetable and find out more.

Either way will give visitors to the UK a unique opportunity to see suburban, residential England on route.

All children are given a ‘Passport’ and they can collect six stamps throughout the tour. Many adults may like to collect them too as the stamps are simply pressed into a sheet of paper so bring a notebook or ask for your own Passport. The book also has clues on where to find the fifteen hidden golden snitches which is another way to keep all members of the family entertained and focused. Staff can give more clues as they can be hard to spot and I saw many adults just as keen to complete the challenge. 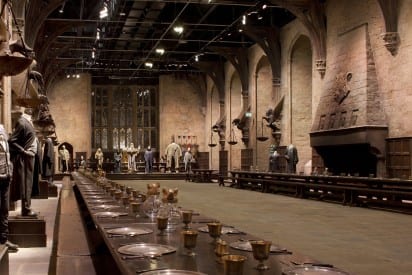 The basic tour route is:

You enter as a group at your allocated time but you do get to see Harry’s bedroom under the stairs while waiting. If you’re really early you could go to the large Studio Cafe or shop while waiting.

When you enter you start in an introduction room with a quick speech from a member of staff and then watch a video about the discovery of Harry Potter and how it took over the world.

Next you all move into the cinema and after a staff introduction see a short film narrated by the main three actors (Daniel Radcliffe, Emma Watson and Rupert Grint) and gain an insight into the making of Harry Potter.

Staff then invite everyone forward and take a volunteer to open the door into Hogwarts Great Hall which is large and everything you would hope for. A member of staff stays with you and, after letting you explore for a while pointed out some of the things we hadn’t noticed such as the fact there’s no ornate ceiling – that’s added by CGI – but the flag stone flooring is 10 years old and is the real thing.

See if you can spot Daniel Radcliffe’s first Hogwarts school uniform and look at the scratches on the long dining tables which were done by the many children who worked on the set as they were encouraged to be normal school children so there would be some true ‘wear and tear’.

Over the years, the Great Hall has been used for cast members and crew birthday parties and celebrations which must have been fun to attend.

From here on in you’re free to tour the attraction on your own. Many run straight past the first corridor to get to the sets but along the way there’s a makeup table and costumes and much more. 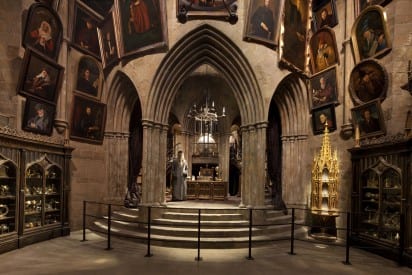 Once in the interior sets area it’s basically a photo taking frenzy and the world of Harry Potter is brought to life for us. There are plenty of staff and I was impressed by their knowledge, not only of the attraction but of the Harry Potter films in general.

To stop it feeling like a museum, there are some interactives such as the Marauder’s Map which is an excellent use of touch screen technology as you start it by touching the map (screen) and saying, “I solemnly swear that I am up to no good!”

Dumbledore’s Office is so incredibly detailed you probably should return a few times. Look for the Pensieve where he would look at memories and spot the Sorting Hat on a high shelf. All of the portraits in the office are sleeping and had to be changed to portraits of people awake when needed for filming.

At the back of the Headmaster’s Office there’s an area that it was always thought Dumbledore would use for resting and private work but, apparently, it was never seen in the films. Here, you can go around the back and look into a window to view this hidden area.

This isn’t a theme park so you won’t find rides but there is the opportunity to sit on a Nimbus 2000 (broomstick) against a green screen. You get to wear a Hogwarts school cloak and take a one minute flight through London. When I visited you could buy photos (from £12) and they hope to add an option for the DVD of your flight soon too. 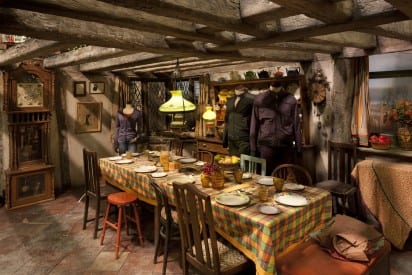 Over in the Weasley’s kitchen there are a few fun interactives where you move a wand (fixed in place so you can only move it side to side) but this makes things happen on the set such as the ironing and chopping carrots.

A suggested visit duration is three hours and it was already two hours when we got to the end of the interior sets and reached the exterior sets. There isn’t too much here but you do get to sit in Mr Weasley’s Ford Anglia and on Hagrid’s motorbike and sidecar. There’s also the triple decker Knight bus which you can stand on the back of but not go inside, plus Hogwarts Bridge and even the house at Privet Drive (but you can’t go inside). Note, this is actually outside so they can’t control the weather.

Most people will need a break at this point so there’s a refreshment kiosk and a separate line for Butterbeer as it’s so popular! I didn’t try it as others were saying it was incredibly sweet but many enjoyed it (£2.95 a glass). Did you know?: This is the only place outside of America where you can buy Butterbeer.

Sadly, the refreshment kiosk is by Starbucks (personal frustration with their attempt at world tea and coffee domination while only offering low grade tea and bad-tasting coffee). Anyway, there are a few tables and benches so do stop and relax and let the kids run around for a bit. My five year old enjoyed a few games of hide and seek and even hid so well we had to ask staff to help us find her! 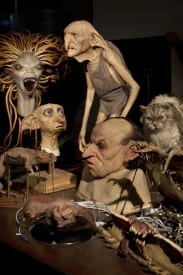 Heading into the next building you reach the Creature Shop and can see the goblins from Gringott’s Bank, push a button to make a Mandrake to jump out of its pot and make a baby Voldemort breath. Watch out for the Monster Book of Monsters as it comes alive and snaps at you! (activated by a sensor when you get near). We ran to see Dobby as others watched Buckbeak contemplatively. Aragog the spider is hanging from the ceiling so do look up and know that’s a ton of spider overhead.

This leads into Diagon Alley which is…magical. You can’t enter the shops but you can look into windows and it’s a wonderfully atmospheric area, which strangely reminded me of Dickens World in Kent. 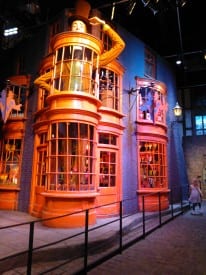 Past the almost not-worth-the-effort Art Department with some sketches and concept paintings to the Model Room where you see the initial mock-ups of the film sets created in white card before seeing the enormous Hogwarts model. I don’t think anyone enters the room without a sharp intake of breath and a “Wow!” and it is truly worthy. Nothing had prepared me for the scale of this model that takes at least a full minute to walk around and can be viewed from two floors. I discovered that even the interiors were dressed when filming was swooping past the windows and that all the clocks were set to the appropriate day or night time when filming.

The tour ends at the Tribute Room which has the walls lined with wand boxes and the names of all the cast and crew who have worked on the Harry Potter films at the studio. Basically everyone involved for ten years. Yeah, that many boxes.

As you would expect you exit through the gift shop where there’s film merchandising across a wide price range. There are lots of sweets including chocolate wands (£4) and lollipops (£4 and £5). T-shirts are around £15 and the Hedwig the owl backpack is fab at £30. Wands are £25 and are not toys so the chocolate wand may be better for the kids. For the collectors there are even character costumes for sale and Dumbledore’s robes are £500. I wondered who might be buying these costumes but when I saw Hermione’s Yule Ball dress I could easily see if being bought, and worn, for a prom or special occasion (£240). Much of what’s on sale is exclusive to the UK which makes all purchases more special. 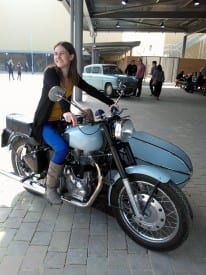 International visitors might like to get the Digital Guide which is available in eight languages including an English version too to gain more information while on the tour.

While you see an awful lot, not everything has labels so it may take a real Harry Potter fan to recognise everything so either: ask lots of questions, buy the official guidebook (£10) or come back again when you realise what you missed!

My full visit took around four hours which makes the value for money much better than I initially thought. For one adult and child tickets would be £50 and we compared this to advance tickets on the London Eye for an adult and child at £26 yet only lasting half an hour. I’ll never stop loving a trip on the London Eye so am not suggesting that is poor value yet it would be most unfair to suggest the Warner Bros Studio Tour is too expensive. There will always be people who want to see where Harry Potter was made and it’s fantastic news this attraction is now on offer. The films also used many locations outside of the studio and this gallery will help you find the key Harry Potter film locations in London.

Worth a Visit?: Yes.