You are here: Home / British History / Ancient Roman Ring That May Have Inspired Tolkien On Display Now in Hampshire 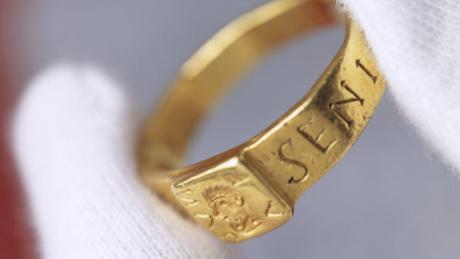 A new exhibition at The Vyne – a Tudor palace turned family home turned National Trust attraction in Basingstoke – explores whether an ancient Roman ring discovered in a southern English field in 1785 could have been the One Ring to rule J.R.R. Tolkien’s imagination and inspire his creation of The Hobbit and The Lord of the Rings.

The intricate gold band, which ended up on a farm in Silchester, carries a Latin inscription and has been linked to a tablet found at the site of a Roman temple dedicated to the god Nodens in Gloucestershire. That tablet is inscribed with a curse upon the thief who stole the ring.

It is believed that archaeologist Sir Mortimer Wheeler, credited with establishing the ring’s connection to the tablet and curse, discussed the artifact with Tolkien in 1929. Tolkien was then Professor of Anglo-Saxon at Oxford, and Wheeler apparently sought his expertise as he was studying the history of the jewelry and its theft.

Tolkien in particular was consulted because he had worked extensively on the etymology of the name Nodens and had visited the temple site where the tablet was discovered in Gloucestershire many times.

Less than a decade after this purported meeting, The Hobbit was published and a fantasy universe was born – notably, one in which an awful lot of trouble is caused by the theft of a gold ring bearing a cryptic inscription in an ancient tongue.

Coincidence? The National Trust and the Tolkien Society encourage you to visit The Vyne and decide for yourself.

There, they’ve teamed up to create The Ring Room, a special section of the historic manor house wherein the bewitched bauble will be on display to the public as of this week.

The Vyne is a very short train trip outside London, and this exhibit sounds like a must-see for Tolkien aficionados. If you’ve got kids (or if you, like me, consider yourself to be a biggish one), be advised that “intrepid explorers can hunt around the mansion, solving riddles and puzzles and hunting for dwarves.” The exhibition also contains memorabilia from the Tolkien Society’s own archive including a book signed by the author himself, children’s resources and “dressing up clothes” (they’ve got to have some phenomenal fake beards – they’ve just got to). You can also try your hand at writing your own curse for the chance to win a prize.

The Vyne’s tea-room is even getting into the spirit of the exhibition with a Tolkien-inspired menu. And at the risk of sounding astonishingly un-American (though it would be neither the first nor last time I risk that), I’d be willing to bet that whatever they have on offer is infinitely cleverer and more appetizing than the Denny’s Build Your Own Hobbit Slams we were subjected to stateside last year. I’m crossing my fingers for some Lonely Mountain Marmalade.

Cindy Scott Traeger is a second-year graduate student at the University of Washington, where she is working toward her master's of library and information science (MLIS). She is an alumna of the University of North Carolina at Chapel Hill, where she earned a BA in multimedia journalism and English. As an undergraduate, she studied at St Edmund Hall, Oxford, and in so doing fell irretrievably in love with the "land of hope and glory." She aspires to return to the UK soon and often. Until then, she immerses herself in British literature and telly. She resides in western Washington state at the moment with her husband, William, and their pet African pygmy hedgehog, Sir Bilbo Sonic Traeger, Esq. Follow @CindyScottTraeg on Twitter or visit http://www.cindyscotttraeger.com for more of her inane prattle.