You are here: Home / British History / Aquae Sulis: 10 Interesting Facts and Figures about the City of Bath You Might Not Know

Located in the County of Somerset, its main natural spring was treated as a shrine by early Britons. On the arrival of the Romans in the first century, they constructed a temple over the spring and built it up into a collection of baths, from which the city’s name derives. Over time, the city grew and received a royal charter from Queen Elizabeth I in 1590 to confirm its city status. One of its more famous residents was author Jane Austen, who based two of her novels in the Bath. So what things might you not know about the City of Bath?

While plenty of places in Britain have been designated UNESCO World Heritage Sites, Bath is the only city in the UK where the entire city is a heritage site. It fits Criterion (i) for its Roman and 18th and 19th Century architecture, Criterion (ii) for its example of 18th Century urban planning that focused on placing buildings to achieve picturesque views, and Criterion (iv) for its examples of Roman and Georgian societal contributions.

The Royal Crescent is a row of 30 terraced houses in the city that was built between 1767 and 1774, designed by John Wood the Younger. It’s one of the city’s most excellent pieces of Georgian architecture, and as much as it is lauded, it’s not the only such crescent in the city, as there are a total of seven similar structures.

Adjacent to the Royal Crescent, Victoria Park was created in 1830 and named after the 11 year old princess seven years before she became Queen.

In a manner of speaking. Not just a type of biscuit, the City of Bath has its own form of currency called the Oliver, which is a coupon that rewards volunteerism and community involvement. They can be used at local businesses in lieu of cash, but cannot be cashed in for pounds and must be earned with community service as opposed to being purchased.

Another of the city’s crescents, the Circus was originally called the King’s Circus and was designed by John Wood the Elder, who died three months after the first stone was laid and had to be completed by his son, who also built the Royal Crescent. Interestingly enough, the Circus has the same diameter as Stonehenge, which is said to have built on the orientation of the rising and setting sun. The Circus is believed to represent the rising sun, while the Royal Crescent represents the setting sun. During the Bath Blitz of 1942, one of the German bombs hit the Circus, destroying several houses that have since been rebuilt. 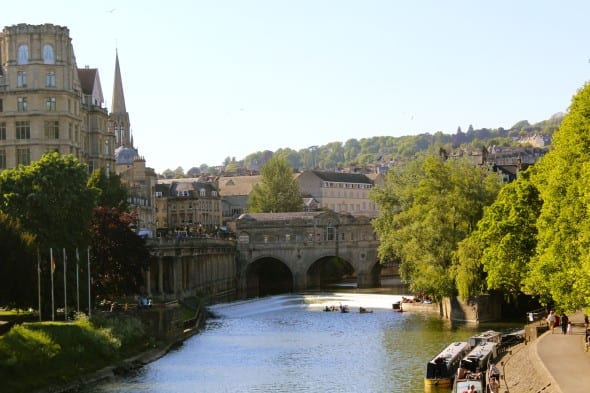 At least two of Jane Austen’s novels are based in the city, where she lived from 1800 to 1806, including Northanger Abbey and Persuasion. During this time, her father died and the finances and social standing of the Austen family suffered considerably as a result. They moved to a less-expensive home in Bath after Mr. Austen’s death and fell out of the prominent social circle of which they were members. As such, which was originally completed as Memorandum, Susan in 1803 presents Bath society in a positive light, while Persuasion (completed in 1816) shows the society in a much more cynical perspective.

In addition to Austen, the city also inspired Mary Shelley to finish her great work, Frankenstein. Charles Dickens was also a frequent visitor to the city, beginning in 1835 as a young reporter and staying at the city’s oldest pub, The Saracen’s Head.

Several festivals and events take place in the city throughout the year, including a Christmas market outside of Bath Abbey, the International Music Festival in May, and the Bath Fringe Festival in June.

The Floor is Lava

The reason for Bath’s hot springs is that the city sits in the mouth of a long-dormant volcano. The caldera that formed the city has been extinct for many millennia, but the thermal heat still makes for a nice, relaxing dip in the springs.