You are here: Home / Britishness / British Food / A Brief History of Hovis Bread: The Bread That Made This The Most Famous Hill in Britain 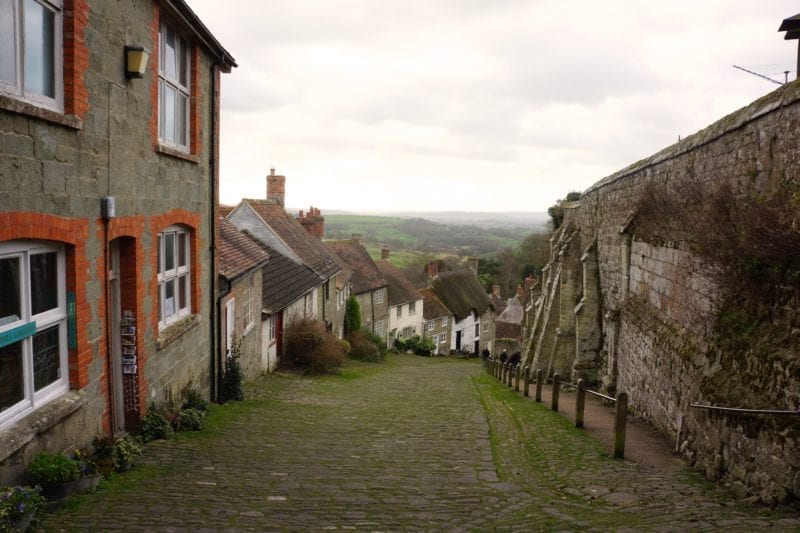 Long before there were whole-foods and artisan bakers, there was Hovis. This loaf of ‘brown bread’ had been on almost every British table for more than 100 years, and it is still going strong. Many English people have fond memories of tiny ‘penny’ loaves of Hovis as their daily bread. The loaf and its special flour, enriched with wheat-germ, was invented in the north of England in the 1880s, by a village miller Richard ‘Stoney’ Smith. His bread quickly spread across the country by clever marketing and an early kind of franchise operation using local bakers. So important did it become that the government took it over as an emergency measure during WWII. The company always promoted the health benefits of its bread, even before the vitamin content of wheat-germ was discovered. A Hovis TV ad from the 1970s was voted ‘Best TV Ad Ever’ in a poll in 2006. The company is today a large corporation, but the ‘home-baked’ image endures for this loaf in the minds of most British people. 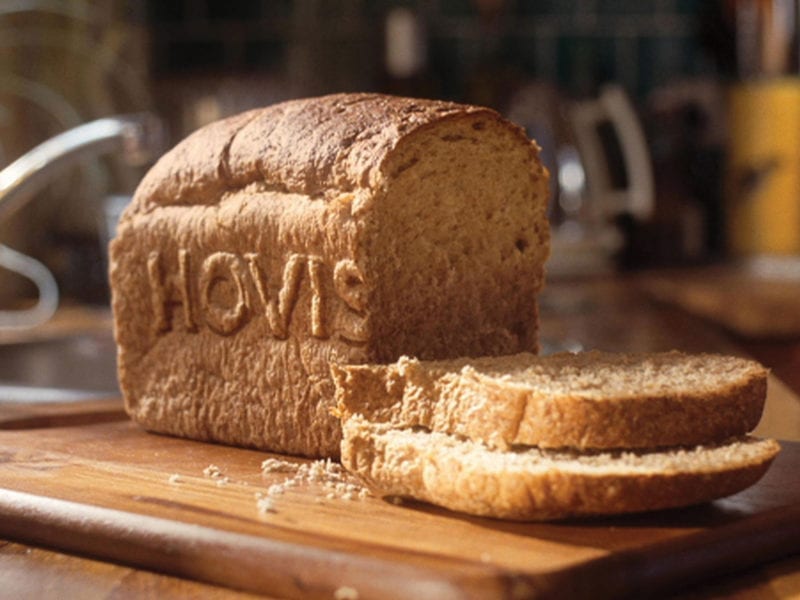 We tend to think of healthy eating as something modern, but most food historians agree that in the 19th-century people ate healthily. They may have consumed lots of carbohydrates, and fats, but they also ate lots of vegetables too. With all their physical activity they needed that bread and potatoes for energy, but white bread, with all the bran and wheat-germ removed, was the standard. This was because flour with the wheat germ in it went rancid quickly, as the oils in the germ decomposed, so it did not store or travel well. For feeding people in the growing cities of the Industrial Revolution, without refrigeration or cooling available, it had to be removed shortly after the flour was ground. The germ and bran removed were used chiefly as cattle food.

People knew little about vitamins at that time, but they did know that the germ of the wheat was nutritious, and people’s diet would be improved if they ate it. It was up to a miller in a remote part of Britain to come up with the solution. Richard ‘Stoney’ Smith, was born on 16 February 1836, in the mill house opposite the water-powered mill in the small town of Stone, Staffordshire. There had been a mill on the site since the Middle Ages, but the one Stoney’s father ran had been built by a certain Robert Bill in 1795. It had two large millstones and could produce 180 pounds of flour an hour, and was driven by water cascading down the mill-race onto a 25-foot diameter water-wheel.

Smith’s idea was to lightly steam the wheat germ, and so stabilize it and prevent it going bad. Then he put it back into the flour, and he realized he could put back as much as he wanted – which he did. His flour had three times more germ than natural flour. He patented the process in 1887, in both the UK and the USA, and dubbed it ‘Smith’s Patent Germ Flour’. From this he baked bread, and called that, ‘Smith’s Patent Germ Bread’. The same year he joined a much larger milling and baking firm, S. Fitton & Sons Ltd, in the town of Macclesfield, Cheshire. He was given a seat on the board, probably in return for his valuable patents, and he was to die in 1900.

The new bread could not have come at a better time, as there was a surge in interest in healthy eating, perhaps in part because of the unnatural and unsanitary crowding in the rapidly-expanding cities. The problem was in the name, which was anything but appealing, or even remotely exciting. So Fitton & Sons organized a competition, offering £25 for a name for their loaf. The name ‘Yum Yum’ did not win, but it did come second. The winning entry was by an Oxford schoolteacher with the Dickensian name of Herbert Grime. Mr. Grime showed his erudite Latin skills by shortening the phrase, ‘hominis vis,’ meaning ‘the strength of man,’ into the crisper ‘Hovis.’ The word Hovis was registered as a Trade Mark in 1890. A few years later, across the Atlantic, Will Smith Kellogg released his Corn Flakes in 1906, similarly marketed as a health food.

Thomas Fitton was the driving force of the firm at that time, and with its new name, and now necessary for all growing children, according to the advertisements of the day, Hovis became a big hit. The company also claimed at the time that 1½ pounds of this bread was more nutritious than 1 pound of white bread and ½ pound of beef steak (and much more digestible). Since it was also Supplied to the Queen and Royal Family and a Cure for Indigestion, its success was assured. Fitton & Sons sold the flour to local bakers, who baked it in tins that stamped the name right into the loaf. By this distribution and franchise method, they were already selling a million loaves a week by 1898. To help supply the bakers of London they had, in 1896, purchased Imperial Mills, on the Embankment, right in central London along the River Thames. In 1898 Fitton & Sons changed their name to ‘The Hovis Bread Flour Company.’

Part of the new healthy society was the craze for cycling, and in a remarkable presaging of the Google Maps strategy, Hovis brought out their ‘Cycle Road Maps and Guides’ that not only contained advertising for the bread but indicated on the map tea-shops where it could be bought as part of the great British institution, high tea.

In 1918, ‘Hovis Limited’ was launched as a public company. In 1920, expanded on their success with cycle maps, Hovis published ‘Where to Go and How to Get There: Hovis Road Map of England, Wales, and Scotland.’ With the discovery of B vitamins in wheatgerm in 1924 sales received a further boost. With competition from other ‘brown bread’ manufacturers growing, they developed the slogan Don’t Just Say Brown – Say, Hovis, which was first seen in 1924. Following the entry into the company of Cecil Gordon Wood in 1928, a period of expansion began, and Hovis acquired mills in England and overseas. By the beginning of the 1930s they had 20,000 bakers producing their bread every day, and proudly displaying a gold ‘Hovis’ sign on their storefronts. The bread came in a both a one-pound and a two-pound loaf, as well as an 8-ounce ‘junior’ loaf and ‘mini’ loaves that sold for one penny and were loved by children.

In 1940, their mill in Manchester was destroyed by German bombs. The government took control of the company as an emergency war measure. Marketing slogans became exhortations to economy with Thin Slices Make Hovis Go Further, and Make Hovis Your Ration. They also introduced a granary loaf, with cracked wheat in the mixture.

Following the war, the company continued to grow, and in 1957 it merged with the flour business McDougall. Shortly afterward, in 1962, the new company added another flour-miller, Joseph Rank, and become Rank Hovis McDougall.

For their advertising Hovis had always used the best. In the 1930s, they hired Heath Robinson, a cartoonist of eccentric and impossible machines, as an illustrator. Mabel Lucie Atwell, famous for the coy and nostalgic illustrations of little girls, was also hired. So too was Tom Eckersley, whose stylish, modern work could not have been further away from either Robinson or Atwell. The high point in their numerous campaigns was the TV advertisement created by the British film director Ridley Scott. Scott had not yet become famous for the film Alien. He filmed a boy pushing a bicycle, carrying a large basket filled with loaves of Hovis, up Gold Hill, in the market town of Shaftesbury, Dorset. Dvorak’s New World Symphony plays in the background. The hill, a quintessentially British cobbled lane lined with charming houses, was the perfect setting to evoke the nostalgia of hand-baked loaves from the village baker, even if Hovis was by then a giant multinational. The ad was voted the UK’s all-time favorite commercial in 2006.

Shaftesbury has now become one of the most famous towns in England, with people coming from all over the world to visit the hill. Many people thought it was in the North of England because Hovis is a northern company and the hills looked vaguely like Yorkshire. People are always surprised to find out it’s located in Northern Dorset.

It’s also not a quaint little village but a thriving market down. Gold Hill is just one of many streets in the town of 7,000+ people. It’s located directly behind the Town Hall, and you will find tourists taking pictures pretty much any time of the year, it’s a popular top for pensioners. There’s a lovely cafe at the top of the hill where you can get a cup of tea and cake while you watch the views over the Blackmore Vale.

There are many fantastic walks in and around Shaftesbury and if you intend to stay a few days, pop into the Shaftesbury Tourist Information Centre where they can provide you with tons of great things to see and do locally. The Hovis ad lives in a particular part of the British consciousness and sense of self, harking back to a simpler time. While those times are long gone, they are not forgotten when it comes to memories like this.

A consequence of the street’s fame is that there are lots of tourists visiting but also lots of major events that take place on the hill as well. Most notable is the Gold Hill Cheese run where locals compete to carry the biggest roll of cheese up the hill; this usually takes place during the yearly Shaftesbury Food & Drink Festival. The real estate on the hill is also extremely valuable due to the fame of the scene – houses on Gold Hill can cost $750,000 or more depending on how large they are (and there’s nowhere to park except at the bottom of the hill.

Since the famous Gold Hill ad, the company has diversified its range of loaves, and today it is 51% owned by the global equity firm The Gores Group, headquartered in Los Angeles. The remaining 49% is held by Premier Foods, who also own several other iconic British food-brands, including Mr. Kipling, Sharwood’s, and Oxo. A Very British Brand has become less British over the years, but their heritage is still beloved – as are their products. Pick up a loaf on your next trip – it makes the BEST toast.