You are here: Home / British History / British Empire / The Senior Service – A Brief History of the Royal Navy 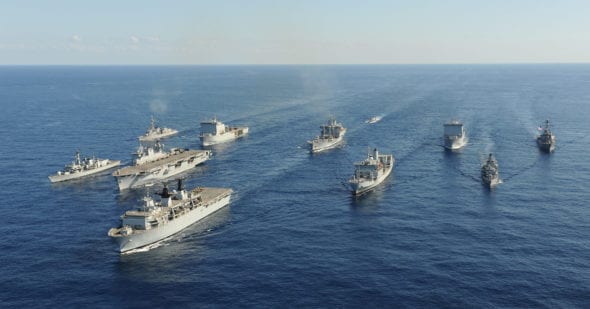 While ships had been used in battles to carry troops and attack enemy settlements, one of the first incidents of England having a Navy occurred under King Alfred the Great. In 882, he captured two Viking ships and in 896, he had a small fleet built that he used to help drive the Vikings from England. Before him, Ӕthelstan of Wessex had used naval power to capture nine Viking longships.

In the ensuing centuries, various kings and leaders from William I to Oliver Cromwell utilized naval fleets as needed. They were raised for wars or defense and grew or waned as needed. With the Restoration of the monarchy, King Charles II transformed the “Navy Royal” to the Royal Navy, a standing power that would last beyond the reign of one monarch.

Administered by Sir William Coventry and Samuel Pepys, the Royal Navy grew from a force of 40 ships and 3,695 sailors into one of the most dominant powers in the world. Pepys became one of the most famous naval administrators by establishing regular administrative schemes to ensure regular supplies, training, construction, and pay, as well as creating the “Navy List” that established the order of promotion. Beginning as Clerk of the Acts to the Navy Board and later as Secretary of the Admiralty, his naval career lasted for thirty years, and his famous diary recounts many of his experiences with the Royal Navy.

The new force saw its first major success in 1664 when a Royal Navy fleet captured the Dutch colony of New Amsterdam (later New York). This kicked off the Second Dutch War, a trying time for the Navy that saw more defeats than victories but helped to establish the Articles of War as well as “Fighting Instructions” that governed the conduct of sailors, and even the methods of combat, respectively.

The 18th Century saw an improvement in the Royal Navy’s record, as the outcome of the Glorious Revolution resulted in a long period of war with France as well as Spain. The first of these was in the War of Spanish Succession when England allied with the Dutch against the Spanish and the French. Conflicts raged across the century as the new United Kingdom formed in 1707 fought the War of Quadruple Alliance, the War of Austrian Succession, the Seven Years’ War, and the American Revolution, in which France allied itself with the American revolutionaries.

What followed was a period of incredible success. By the beginning of the 19th Century, Britain found itself at war with post-Revolutionary France, Holland, and Spain. Eventually, Napoleon gained control of France, and the Napoleonic Wars began as he marched across Europe and Britain came to the defense of its neighbors. Admiral Horatio Nelson’s ultimate victory at the Battle of Trafalgar propelled the Royal Navy into the world’s dominant military force. This became more apparent in the Anglo-American War of 1812. While the Napoleonic Wars in Europe required Britain to keep the bulk of the Royal Navy there, a lesser force sent to the United States was able to keep the fledgling U.S. Navy in check with the help of privateers.

The Royal Navy’s status at the top was maintained from 1815 through the reign of Queen Victoria. This period, called the Pax Britannica, saw no major naval conflicts until 1914. While Britain participated in the Crimean War and even sent ships to the Black Sea, the war was mostly a chance for the Royal Navy to test new technologies. There was more bombardment in actions during the Crimean War and the Anglo-Chinese Wars as well as the use of shelling to open up Japan to trade. The rise of steam engines as a means of propulsion gave the Royal Navy newer and stronger warships, but also led to increased military power from France, Russia, Germany, and Japan.

The turn of the century saw the introduction of submarines to naval warfare just in time for a network of European alliances to result in World War I. Submarines created a new method of fighting and new countermeasures to hunt and destroy enemies hiding under the waves. The war also saw the introduction of air power to the Royal Navy, first as reconnaissance craft, then the navy’s first aircraft carrier, the HMS Argus in 1918. A short period of peace gave way to World War II, utilizing the same means, though significantly upgraded from WWI. An increase in British firepower was necessary after initial defeats from the German and Japanese navies. While the Royal Navy was still the largest in the world, the peace enjoyed between wars resulted in less construction and the UK starting out WWII with an aging fleet. However, early successes gave way to a growing trend of British victories that helped turn the tide in the Allies’ favor.

Peacetime and the end of the British Empire saw a reduction in the Royal Navy and its influence across the globe. The United States became the new naval power, solidifying its post-war status as a Superpower, along with the Soviet Union. However, this new shift in the world and Britain’s geographic proximity to the Soviets meant that the British naval power would be maintained as the Iron Curtain fell over the eastern half of the continent. Nuclear power was also introduced to propel ships and submarines, though those vessels were also equipped with nuclear missiles to act as a deterrent to potential aggression.

Most of the major conflicts following WWII had little to do with the USSR. The UK’s first major conflict from 1945 occurred when Argentina invaded the Falkland Islands in 1982. A task force responded to the invasion by sailing to South America, where it proved more than a match for the Argentinian fleet. The modern Royal Navy showed that submarines and aircraft carriers were the backbone of the fleet’s military power, but that any further reduction of forces would hamper its ability to respond to new threats.

The Royal Navy received a much-needed boost following the war, and in the 1990s and early 2000s, participated in a number of coalition missions in the Gulf War, Kosovo, Afghanistan, and the Iraq War. Today, the UK maintains its naval strength and ability to protect British interests at home and abroad.