You are here: Home / British History / British Legends: St. George and the Dragon 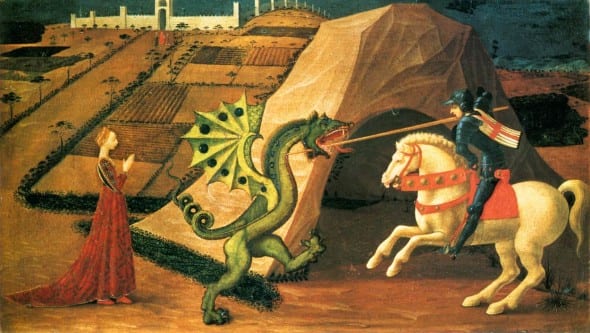 The patron saint of England, St. George has grown to legendary status from his days as a Roman soldier and early Christian martyr.  Reportedly born around sometime between 275 – 285 A.D., either in Lydda, Syria or Nicomedia, Bithynia (modern day Turkey) in the Roman Empire.  Historians have argued over the details of his actual life, though they suggest that he was from a noble Christian family and applied to be a soldier under Emperor Diocletian.  Unfortunately, Diocletian later issued an edict that all Christian soldiers should be arrested unless they would perform a sacrifice to the Roman gods.  George refused and was ultimately executed by beheading, becoming a martyr.

English soldiers coming back from the Crusades brought the stories of St. George with them.  His feast day was mentioned in the writings of the venerable Bede in the 8th Century.  The first church dedicated to him was in Fordington, Dorset and the Council of Oxford proclaimed 23 April as St. George’s Day.  When King Edward III founded the Order of the Garter in 1348, he put it under George’s patronage.  Despite this, George didn’t fully become associated with the patronage of England (as some sections regarded Edward the Confessor as England’s patron saint) until the English Reformation, when King Henry VIII struck down all other saints’ banners besides that of George.

The first mention of the Legend of St. George and the Dragon comes from the Golden Legend, a collection of stories about men and women canonized by the Roman Catholic Church.  The Golden Legend states that George traveled to Libya and found a town near a lake that was terrorized by a dragon.  There, George encountered an old man who told him that every day the dragon would arrive to plague the town, demanding a sacrifice.  At first, the dragon was content with receiving two sheep, but eventually, the town ran out of sheep and had begun drawing lots to sacrifice the townspeople.  This backfired horribly when the King of Egypt’s daughter was selected.  The king stated that whoever could slay the dragon would then be able to marry the princess.

After hearing the whole story, George took it upon himself to slay the dragon.  He rode out to the lake and found the princess.  He then freed her and rode on to the dragon’s cave to confront the monster.  The dragon emerged from the cave and roared at George, who attempted to drive his lance deep into its hide.  Unfortunately, the lance splintered on the dragon’s scales and George fell from his horse.  As the dragon moved for an attack, George rushed the dragon and drove his sword under its wings where it had no protection and killed it.  In some versions of the legend, George merely wounded the dragon and he and the princess brought it back to the town where George promised to kill it if the king and the people converted to Christianity.  After they did so, he finally beheaded the dragon and married the princess.

The story became an inherent part of George’s legend that was brought back by English soldiers from the Crusades, some of whom claimed that he had appeared miraculously to lead them in battle.  George became the subject of miracle plays and took root into English culture, culminating in his patronage under Edward III and ultimate recognition under Henry VIII.  His cross is the national cross of England, and as part of the Union Flag, is featured in the national flags of many Commonwealth countries.  His legend has been represented numerous times in art, music, literature, film and television.  St. George’s Day remains a favourite English holiday and is celebrated with everything from the old tradition of morris dancing to modern parades.  As time goes on, the Legend of St. George and the Dragon will long be a part of English culture.