You are here: Home / British History / Great British Houses: Chartwell – The Beloved Home of Sir Winston Churchill – The Home That Was His Daily Inspiration 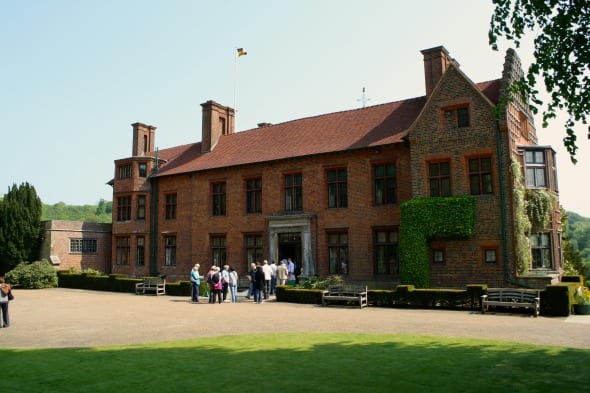 The family home of Sir Winston Churchill for most of his adult life, Chartwell is a museum and shrine to the man who led Great Britain to victory during the Second World War. Now a National Trust property, Chartwell is an understated Victorian country house, originally dating from Tudor times, with beautiful gardens and a spectacular view of the Wealden Hills that Churchill is said to have loved.

A Brief History of the House

Over 700 years before its most famous resident, Sir Winston Churchill, stepped through the door of Chartwell House someone else was calling it home. Local records suggest that there was a property built on this site as early as 1362 and the name Chartwell was most likely derived from the chart (Kentish for common) well that lies on the site and still feeds the ponds to the north of the house to this day.

The Chartwell House you can visit today was built during Tudor times and analysis of the wood dates the building to between 1515 and 1546. The house was probably built as a hunting lodge and has spectacular views over a lake and private valley with the Wealden Hills rolling out into the distance. It is thought that King Henry VIII stayed there while courting Anne Boleyn who was living at nearby Hever Castle.

The property became known as ‘Well Street’ in the late 1700s and was used as a foundling house as part of the London Foundling Hospital until in 1836 when it was sold to the Drinkwater Bethune family from Surrey. The next owners, the Campbell Colquhouns, renamed the house Chartwell and made huge developments and alterations to the house and land before it was purchased by Winston Churchill in 1922. A dark, red-brick, ivy-clad villa on a hill, Chartwell was said to embody Victorian architecture at its least attractive. Churchill set about remodelling and extending the house straight away, enlisting the help of a young architect, Philip Tilden.

For the next two years Tilden transformed the house, adding larger windows to let in more light, adding more rooms, retaining period features such as stepped gables and warm pink brickwork but erasing any Tudor revivalist influences. Despite two years of renovation work, Churchill’s Chartwell was a modestly comfortable, almost suburban home without any of the grandeur one might expect from the home of a victorious wartime prime minister.

Chartwell’s position so close to the English Channel made it vulnerable during World War II so during this time the Churchills resided mainly at Ditchley, Oxfordshire and later at the official country residence of the Prime Minister at Chequers, Buckinghamshire

It’s no secret that Churchill’s financial situation was often unstable and in 1938 Churchill was almost forced to sell Chartwell for financial reasons. At the time the house was advertised as featuring five reception rooms, nineteen bed and dressing rooms, eight bathrooms and eighty acres of land. Wealthy friends of Churchill bought Chartwell for the National Trust in 1946 on the condition that Churchill and his family could live there until their deaths. It was presented to the public in 1966, one year after Churchill’s death.

Chartwell today is a monument to Churchill’s life and his presence fills every inch of the house. Visitors can walk through Churchill’s famous front-door with its striking 18th century surround and wander through the rooms of his house. Churchill’s study is the heart of Chartwell and most evokes the Tudor origins of the property with old roof timbers, a Tudor doorway and views of the valley. Churchill spent most of his time in this room after his retirement, sleeping in a four poster bed in the corner in order to return to work as soon as he woke.

The house is crammed with memorabilia from Churchill’s life and the walls are lined with photographs of the famous faces Churchill met during his time as prime minister and into his retirement. While much of Chartwell is shrine-like, each room a museum exhibition of Churchill’s incredible legacy, there are traces of the real life lived within its walls. Churchill’s wife Clemintine’s beloved Rose Garden, the dining room where Churchill used to show after-dinner films and, of course, Churchill’s art studio offer a little more than typical house-museums can.

Churchill’s love of painting was a huge part of his life and provided some relief from the periodic bouts of depression he famously referred to as his ‘black dog’. In the 1930s Churchill converted a cottage on the property into an art studio and throughout the rest of his lifetime completed up to 500 paintings, many of which are now owned by universities, museums and private collectors. Our current monarch Queen Elizabeth II has one of Churchill’s paintings in her private collection. There are around 130 of Churchill’s paintings, often described as Impressionist in style, hung on the various walls of Chartwell and Churchill’s beloved studio has been left just as he left it, with easel and palette in place.

A cosy family home, Chartwell is not designed for coach loads of visitors and the usual car park and visitor centre you would expect from a National Trust property are located on a hillside at a distance from the house. A typical visit includes a tour of the house, entry to temporary exhibitions and a tour of the gardens.

Chartwell is famous for the sole reason that Sir Winston Churchill, Prime Minister of the United Kingdom during the Second World War, lived there for most of his adult life. The house has been preserved exactly was it was when Churchill lived there as a shrine to the man, his life and his legacy. It’s not a particularly grand country house but it qualifies as a Great British Houses purely because of its connection to Churchill.

Chartwell in Film and TV

From the beginning of March until the end of October Chartwell is open to visitors from 11am to 4.15pm every day. Tickets cost £12.50 for adults, £6.25 for children and £31.25 for a family. Cheaper tickets are available for access to garden and studio only. See the website www.nationaltrust.org.uk/chartwell for more information. It’s pretty easy to get there from London but it requires a train trip. We recommend taking a train to Sevenoaks station (6 miles away) as it has a regular fast train service from London Charing Cross, Waterloo East and London Bridge and there are ample taxis waiting outside the station when you arrive. Grab a taxi and have them take you to Chartwell and if you have time, Hever Castle is also nearby and worth a visit. The Taxi driver will be happy to wait for your or return at a scheduled time.