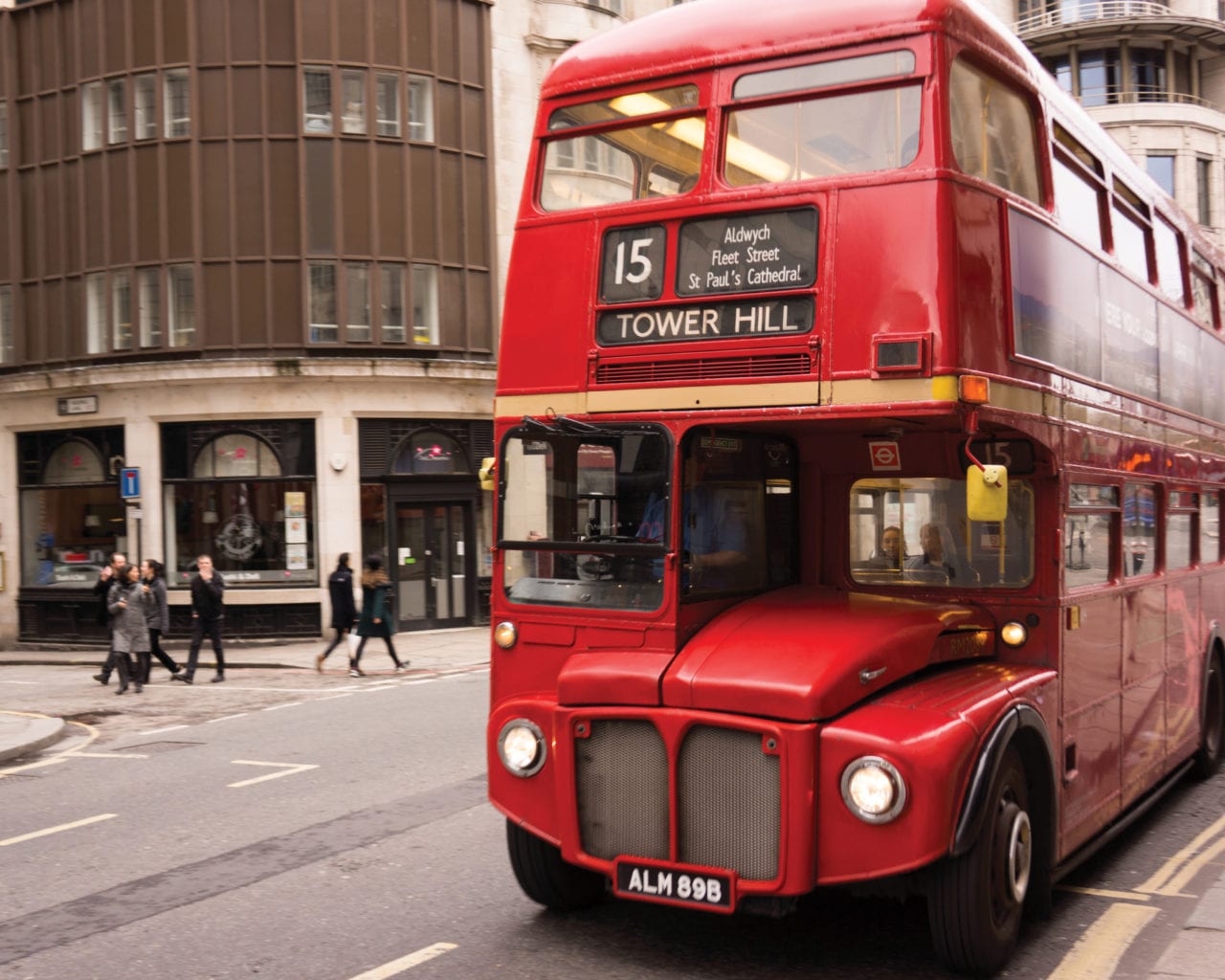 The Routemaster bus ran throughout London for the second half of the 20th century. It became the standard bus instantly recognised by everyone and eventually exported around the world. The design incorporated several features new on buses, such as a lightweight aluminium body, power-steering, an automatic gearbox and power-braking. The ‘hop on, hop off’ design allowed for rapid use of the bus outside designated stops and was a large factor in its enduring popularity, despite the safety risk. Although production ceased in the 1960s, the bus survived the privatisation of London Transport and was even re-furbished to extend its life. The last bus was taken out of service in 2005, although a heritage route still allows visitors to ride this classic bus.

In 1829, inspired by a similar service he had seen in Paris, George Shillibeer began a horse-drawn ‘omnibus’ service in London. The first route was from Paddington station to the Bank of England at a fare of one shilling. Since this is almost £40 today, the stop at the bank was probably necessary. He borrowed the name for his service from the French too, which became contracted to ‘bus’ quite quickly. Other similar services followed, and in 1855 a joint Anglo-French company, Compagnie Generale des Omnibus de Londres, soon to become the London General Omnibus Company, bought out almost all the services and formed a monopoly. By the early 20th century, the company was operating a mixed fleet of horse-drawn and motorised buses and in 1912 LGOC was bought out by the operators of the London Underground and the joint business soon became known as London Transport.

The earliest motorizsed buses were modeled on the horse-drawn omnibus, with an open upper deck reached by an outside staircase, with the driver seated in an open compartment at the front. Already the buses were painted red, having earlier been decorated with the Union Jack.

The most famous early bus was the B-type, nicknamed ‘Ole Bill’, which was even used as a troop-carrier during WWI. This bus, usually considered the first mass-produced commercial vehicle, was designed by LGCO’s chief motor engineer, Frank Searle, and assembled at a factory in Blackhorse Lane, Walthamstow. After the amalgamation with the Underground service, the manufacturing section of the company became the Associated Equipment Company, usually simply know as AEC. Besides making buses, AEC also built lorries, initially based on the bus chassis. In 1927, AEC moved its manufacturing from Walthamstow to a new factory in Southall, Middlesex.

Frank Searle was replaced by G. J. Rackham, who had worked for the American firm, Yellow Coach, during the 1920s. AEC built a wide range of buses, both single and double-decker, for London Transport and for many parts of the Empire. The first double-decker with a roof appeared in the 1920s with a six-wheel luxury vehicle running from Cricklewood to Grosvenor Place. By the 1930s, buses in a style that would become familiar began to appear on the streets of London, notable the AEC Regent III RT, which entered service in 1938 and continued until 1954, with several thousand being manufactured during that period. This bus had enclosed decks and a large rear platform with enclosed steps to the upper level. The driver sat in a separate compartment at the front, and a conductor sold tickets and directed passengers.

As the economic recovery from WWII took hold, the need for a new bus became apparent. The tram service, which also ran in London, had been replaced by trolley-buses and these now were removed from the streets, as car traffic grew, and were replaced by bus routes. A new, more fuel-efficient bus was needed that was cheaper to service and carried more passengers. Between 1947-1956, a team directed by A.A.M. Durrant and Colin Curtis designed the Routemaster bus for AEC, which came out three-quarters of a ton lighter than the old RT models, and carried 64 seated passengers against the 56 of the older buses. The styling of the bus was by Douglas Scott and did not deviate greatly from the RT style, retaining the open rear deck and separated driver compartment. Seen from the front the Routemaster had a broader radiator than the narrow design of the RT buses. The bus was built with the new war-time material, aluminium, and also features novel innovations like independent front suspension, power steering, a fully automatic gearbox and hydraulic power braking.

The open rear deck was hugely popular with passengers, since it allowed anyone to board the bus when stationary, or even slow-moving, away from the designated stops. For this reason, this style is often called a ‘hop on, hop off’ bus. Despite its popularity, this feature became a factor in its withdrawal, since mounting and leaving a moving bus caused around 12 fatalities a year.

The Routemaster bus became the iconic London bus during the post-war period. Between its arrival on the streets on the 8 February 1956 and the production of the last bus in1968, 2,647 basic model Routemasters were built, with another 200 single-decker coaches and some experimental front-entrance versions also being built during that time. The bus began to be withdrawn from service in September 1982, chiefly because London Transport moved to single-driver buses, eliminating the conductor, to cut costs. By 1988, the Routemaster was largely confined to inner-city routes, but continued through the privatisation of the service which began in 1989.

Although no longer being produced, and with the AEC plants now closed, the buses were still structurally sound and it made economic sense for the new private firms to keep them on the roads. So a process of restoration began, with buses being refurbished and even in the new millennium London Transport, now controlled by the socialist mayor Ken Livingstone, started buying back and refurbishing buses that had earlier been sold to other companies, in the UK and overseas.

However, pressure to replace the bus, for safety reasons and to provide handicapped transport, continued and the last bus on a standard route (route 159) ran on 9 December 2005. The bus entered the Brixton depot just after 2 o’clock in the afternoon, having been delayed by the huge crowds that had gathered and who completely blocked the road. A much loved icon of London was retired but the idea behind the Routemaster endures in its modern replacement the New Routemaster.

Sites to Visit and Further Research

There is a Heritage Routemaster bus route 15 between Trafalgar Square and the Tower of London, via St Paul’s Cathedral. Buses run 09.30 to 6.30 every day (except Christmas Day).

The London Bus Museum is part of the Brooklands Museum, on Brooklands Road, Weybridge. The museum is open every day except for the Christmas period, from 10 am to 5 pm in summer, and till 4 pm in winter. The museum has a large range of vintage buses, set against backdrops of street-life of the various periods.

There is a biography of the bus, The Bus We Loved: London’s Affair with the Routemaster, by Travis Elborough. User manuals and repair manuals are also available.