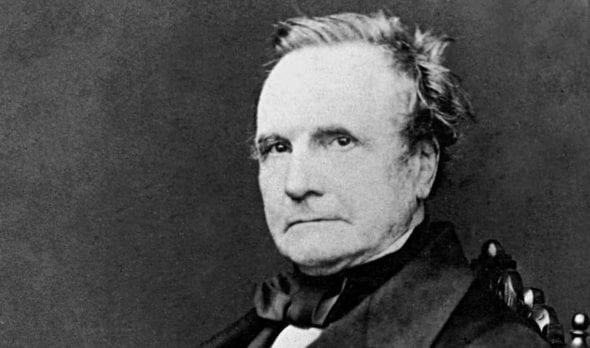 Charles Babbage was an eccentric mathematician and polymath, often called the ‘father of computers.’ He was a professor of mathematics at Cambridge, although independently wealthy. Dissatisfied with the declining state of science in early 19th century Britain, he campaigned for higher standards and more rigorous science, as well as making proposals to improve the processes of manufacturing in the early factories of the Industrial Revolution. He is chiefly remembered today for his designs for the Difference Engine and the Analytical Engine, mechanical machines that foreshadowed the principles of modern computers. His machines could not be built with the technology of the 19th century, but they sowed the seeds of ideas that would blossom a hundred years later into the computer age.

As was not uncommon in the 18th and early 19th centuries, Charles Babbage was largely educated by private tutors. Several serious childhood illnesses were part of the reason for his private tutoring, although he did attend a country school and a grammar school in Totnes, Devon, near where his family lived, for part of his childhood. It was while attending a small academy school that he first developed his love of mathematics. His father was a banker, so numbers may have already been imprinted in his genetic code.

By the time he arrived at Trinity College, Cambridge in 1810 he was sufficiently well-read in mathematics, and familiar with the work of the current British mathematicians, that he found the teaching at Cambridge rather inadequate. In 1812 Babbage and some fellow students of mathematics founded the Analytical Society, with the ambition of replacing Newton’s notation for calculus with the new and more versatile notation developed by the German mathematician Gottfried Wilhelm Leibniz. Despite some initial opposition, by 1830 Leibniz’s notation had been widely adopted. The society later became the still-existing Cambridge Philosophical Society.

Babbage began to lecture in astronomy at the Royal Institute and was made a fellow of the Royal Society in 1816. He traveled to France with his friend and fellow scientist John Herschel, to meet French scientists, but back in England failed in a bid for a professorship at the East India College and again at the University of Edinburgh.

Hershel, who would later make important contributions to the development of photography, worked with Babbage on early ideas on electromagnetism, but they failed to put all the pieces together and were overtaken by the work of Michael Faraday. Babbage also worked on early actuarial tables, used to estimate mortality for insurance purposes, but the insurance company he was involved in developing never actually materialized.

During all this time Babbage was dependent on the largesse of his father, but in 1827, with his father’s death, Babbage inherited a considerable fortune (around £8 million in present-day money) and became independent. The same year he also lost his wife of 13 years, Georgiana Whitmore, with whom he had eight children. These changes in his fortunes prompted him to leave his family at their home in Marylebone and traveled to Italy. Throughout the 1820’s he had tried for a chair at Cambridge, and was finally successful in 1828, quickly returning from Rome to take up the position. Now secure both financially and academically, Babbage could turn his full attention to his diverse pursuits.

In 1820 the Astronomical Society of London (to become the Royal Astronomical Society) was formed at the Freemason’s Tavern, in Lincoln’s Inn Fields, and Babbage was among those at the dinner. William Herschel, the father of his friend John Herschel, became its first president and it was while working for the society that Babbage’s most enduring work took place. One of the first aims of the Astronomical Society was to standardize and circulate astronomical data, and particularly important was given to improvements in the Nautical Almanac. This was used by sailors to calculate longitude at sea, in conjunction with the accurate marine chronometer invented in the middle of the 18th century, and was a vital part of Britain’s dominance as a marine power. Besides improving accuracy, Babbage wished to expand the information in the Almanac to make it more useful to Astronomers, a new but rapidly developing science at the time.

In those times the tedious, long and repetitious Almanac calculations were carried out by ‘computers’ – they were called that, but of course, they were human – and this was quite a well-paid and secure job. Improving accuracy, centralizing control and saving money were all on the mind of the Royal Observatory, Greenwich, which was responsible for the Almanac when they asked Babbage and Herschel to check the accuracy of some of the tables in use. Errors were found, and with vague promises of funding from Greenwich, Babbage began in 1822 to build his first ‘Difference Engine,’ so called because it used differential calculus in its functioning. His first six-wheel prototype was demonstrated to a fascinated audience, and he quickly moved on to a larger version – Difference Engine 2.

Then, working with the mathematician Ada Lovelace (read more about her contributions fo computing here), Babbage devised a plan for an even more powerful machine – the ‘Analytical Engine,’ which would be able to do any kind of calculation, using punch cards. He asked the government to choose which engine it wanted, and to fund it. After an eight-year wait, both engines were declined, and no further progress was made until the 20th century.

Babbage was not just an academic mathematician, but an activist as well. British science had declined badly by the early 19th century, and the Royal Society, in particular, had become more of a ‘boys club’ than a serious center for scientific endeavor. This was a large motivator for the formation of the Astronomic Society by the younger, more rigorous scientists, like Babbage, Herschel, and others. In 1830 Babbage published his Reflections on the Decline of Science in England, and on Some of Its Causes, in which he criticised the Royal Society, earning the animosity of Joseph Banks and other old-guard members. He received a better reception in other quarters, with the formation in 1831 of the British Association for the Advancement of Science. Reform did eventually take place in the Royal Society too, leading to a golden age of science in Britain.

Neither was Babbage only involved in mathematics. He was a polymath, working on the organization of factories and promoting the division of labor; proposing a more rational theology and suggesting that Genesis should not be taken literally, long before Darwin’s bombshell; and studying cryptography and meteorology. More eccentrically, he championed a variety of causes, all in the interests of public order. These included campaigns against the careless breaking of plate-glass windows, the rolling of hoops in the street by young boys and particularly the noise created by wandering organ-grinders. He also argued against hereditary peers and personally declined both a knighthood and a baronetcy. Babbage continued to work up until his death in London at 79, on the 18th of October, 1871.

Babbage is considered the father of computing, although it took almost a century before technical ability caught up with his ideas. The idea of mechanical computers has recently been revived as a possibility for operation in situations of high radiation or extreme heat.