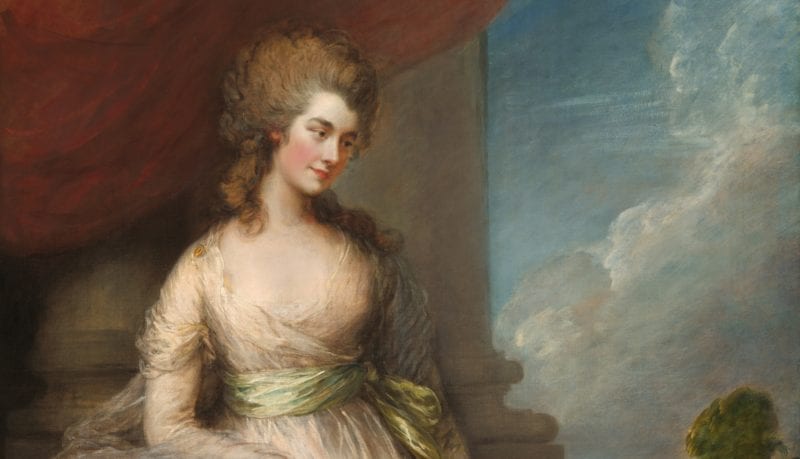 Idle and frivolous rich woman, or oppressed early feminist? Political activist or vote-buyer? Tricked by her best friend, or fully in control of her actions? Best-bred woman in England or dissolute gambler? One’s view of Georgiana Spencer, who married William Cavendish, the 5th Duke of Devonshire, will inevitably be colored by one’s view on class and privilege in general, but either way, the life of the Duchess of Devonshire makes an exceptional story.  She lived the fairy-tale life, until her husband, after a string of mistresses, brought her best friend into his bed. She was undoubtedly a loving mother to the children she bore him, and finally produced the requisite male heir. Following the custom of the time she was then able to take a lover of her own, which she promptly did. The great-great-great-grand-aunt of Diana, Princess of Wales, she shared with her descendant high periods and low ones, love, and disappointment. There was also scandal and intrigue, although the Duchess had the good fortune to die surrounded by a loving family. 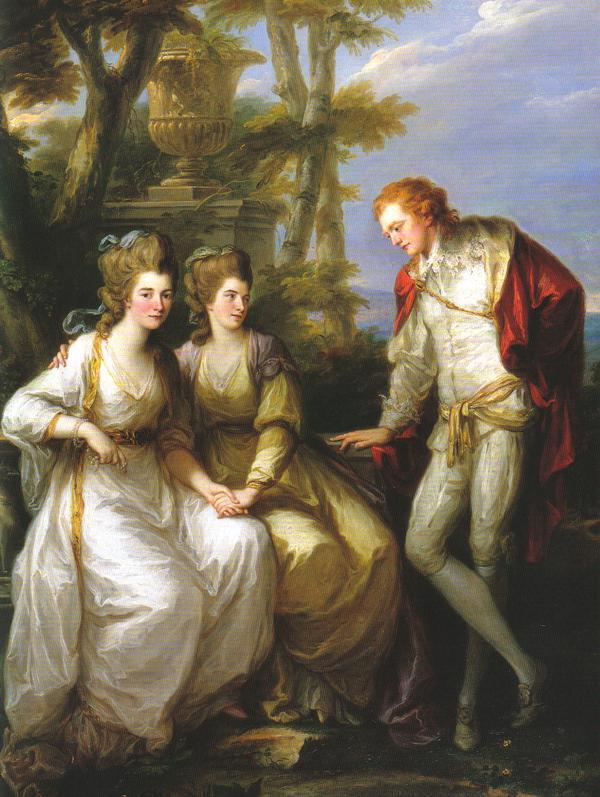 If anyone could be said to have been born, as the saying goes, with a silver spoon in her mouth, it was Georgiana Spencer. Her birth on the 7th of June 1757, as the first child of John and Georgian Spencer, took place at the Spencer family home, Althorp. The mansion, which dates from 1688, was filled with art treasures and valuable objects, deriving from the family’s lucrative sheep-raising business. John Spencer was just 23 years old when his daughter was born, and at the age of twelve, he had received the largest inheritance even seen in Britain. That family wealth would only increase in her teenage years by the imposition of the brutal Inclosure Act (1773) which took common land away from the rural people and transferred it, often for sheep-raising, into the hands of the wealthy. Althorp today sits on 13,000 acres of prime, rolling agricultural land.

Georgiana was adored by her mother, who, unusually for the time, had married for mutual love. She was a noted philanthropist, well known for the concerts and plays frequently staged at their London residence, Spencer House. She seems to have favored Georgiana over her other children, and called her, ‘My little Gee’. She must have passed on to her daughter her proficiency in language, her love of the arts, and perhaps even her ‘accomplishments in botany’. After an uneventful childhood, she was placed in an arranged marriage at 17, to another wealthy family. At a small private ceremony in Wimbledon Parish Church, she was married to William Cavendish, the 5th Duke of Devonshire, who was 25 at the time. The Cavendish family were wealthy aristocrats and politically powerful. They supported the Whig faction and the government of Sir Robert Walpole.

From the start, Georgiana’s marriage was not a happy one. Like most men of the time – although not like her father – William had little interest in a close relationship. He was emotionally distant and spent most of his evenings playing cards at the newly-founded Whig club, Brook’s in St James, London. Any illusions Georgiana may have had about her husband were shattered when he tasked her with the upbringing of his illegitimate daughter, Charlotte Williams, born from a brief encounter with a hat-maker before their marriage. When her mother died, Charlotte was given to Georgiana to raise. Although she seemed to take well to the child, Georgiana’s mother warned her not to mention her origins to anyone. William continued to have numerous affairs.

While ‘taking the waters’ in the spa-town of Bath in 1782, Georgiana met a woman of her own age, Lady Elizabeth Foster, daughter of the Earl of Bristol. Lady Elizabeth had separated from her husband, John Thomas Foster, an Irish politician, the year before. Largely destitute after the separation, and with two sons in her care, Georgiana took pity and invited them to move into Althorp. This may have been a fatal mistake, since quite soon the Duke and Lady Elizabeth became lovers. She continued to live in this a ménage à trois for the next 25 years, bearing him a son and a daughter. Along with his legitimate children by Georgiana, all these children would be raised together at Devonshire House, the London residence of the Duke.

The three-way relationship was complex. The Duke and Elizabeth were clearly lovers, but the relationship between Georgiana and Elizabeth is unclear. They seem to have had genuine affection for each other – certainly from Georgiana, who wrote to Elizabeth of her ‘heart crying to you’, but if any sexual relationship occurred, which on balance seems quite likely, it cannot be verified. They exchanged many letters expressing affection, and it is not inconceivable that Elizabeth’s relationship with the Duke was a cover for a deeper, more emotional relationship with Georgiana. Neither was Lady Elizabeth true to the Duke, having numerous liaisons with other men, but where Georgiana stood in all this was and continues to be a topic for speculation. Many feel that the popular portrayal of Georgiana as betrayed by her best friend is far from being the whole story.

Georgiana had her first child in 1783 when her daughter Georgiana Dorothy was born. She was followed in 1785 by Harriett Elizabeth – whose middle-name is perhaps telling. The male heir, de rigueur among the aristocracy, would not arrive until May 1790, when William George Spencer Cavendish was born. Ironically, he never married and left no heirs, becoming known as the ‘bachelor duke’.

During the 1780s Georgiana became involved in the political activities of her husband. The Whigs were the party of the 18th-century version of liberalism, against the monarchy and for the then-novel idea of Liberty. Many supported both the American and French Revolutions. Dinner parties at the Devonshire houses often became political meetings, and Georgiana was known for encouraging women (who did not, of course, have the vote) to support Whig policies. She gained notoriety during the elections of 1784, where she supported a distant cousin, Charles James Fox. Fox was an important politician who had been gained power against the opposition of King George III and signed the Treaty of Paris, ending the American Revolutionary War. Dismissed by the King, Fox was fighting for re-election in his Westminster constituency. Georgiana campaigned vigorously in his support, walking the streets, talking to commoners as equals, and even bribing a shoemaker with a kiss to vote for Fox. Her efforts attracted considerable satirical attention, and she retreated to working for the Whigs behind the scenes.

As well as attracting literary figures, including the great Dr Samuel Johnson, to her home, Georgiana is credited with writing two novels, anonymously. Both were epistolary, that is, written as an exchange of letters, the normal style for novels in the 18th century. The first, Emma; Or, The Unfortunate Attachment: A Sentimental Novel, is attributed to her with some reliability, but the second, The Sylph, is more doubtful, and may have been ghost-written by Sophia Briscoe, an obscure novelist of the time. She also had two poems published.

What is more certain than her literary talent was her talent for losing at cards. Early in her marriage, she began to gamble, a habit that would keep her heavily indebted for life. At first, she turned to her parents to pay, but they ordered her to tell her husband, who repaid her parents and from then on was obliged to pay more and more. Her mother admonished her regularly, but she too had the same problem and lost most of the Spencer fortune gambling. The Duke at one point threatened to end the marriage but relented. It must have been a powerful tool for him to stay in control of his complex household.

Under the social rules of the time, Georgiana could only take a lover once her duty to produce an heir was discharged. Following the birth of William George, she was free and chose Charles Grey, a Whig politician and a future prime minister who would abolish slavery. It was perfectly acceptable for a married woman to take a lover, but much less so to bear his child, so when she became pregnant in 1791 she was sent to France to have the child – a daughter – in secret. Lonely and fearing she would die in childbirth, her time there was miserable. In the event, there were no complications at the birth, and she returned home, but her daughter was brought up by the Grey family. Grey was almost certainly not the only man Georgiana had affairs with, and she lived the rather dissipated life of parties, elaborate clothes and hair-styles, gambling, drinking and secret liaisons that was especially common among the wealthiest classes.

Older now, and worn down by the tribulations of her life, the Duchess became more domestic, spending time with the Duke, and writing. Her health declined, her gambling continued, until in 1806, only 48 years old, she died of an infected liver. There was great mourning in her family and across society, for someone who had always been a shining star of the social world. The Duke was left with a mountain of gambling debts to repay, estimated at the equivalent of about $4 million today. ‘Is that all?’ was his response when told this. Three years later the Duke married Elizabeth, to the consternation of Georgiana’s children.