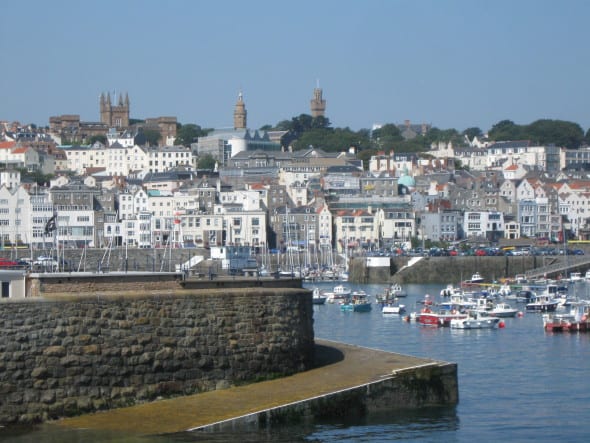 Situated off the French coast of Normandy, Guernsey is one of two Bailiwicks that comprise The Channel Islands; the southernmost islands belonging to the British Isles. While it remains loyal to the British Crown, Guernsey ‘s independent status means it is self-governing and not tied to either the UK or the EU.

My interest in Guernsey began with my love of reading, especially all things WWII. I came across a novel, which described the occupation and its effect on the inhabitants of the island. Guernsey, as the backdrop for many such stories, has recently gained interest for its picturesque and quaint descriptions of a bygone era.

Guernsey is in no way close to my home in Canada. And despite my desire to visit one day, such a jaunt seemed quite impossible. However, an impending visit to family in London got me curious and I began to research the logistics to see if I could make it happen while traveling with my two youngest children, ages 9 and 11. While they knew nothing particular of Guernsey, they too share my interest in stories of survival and coping in times of war through reading such books as The Boy in Striped Pajamas and Stay where you are, then leave. So I decided to try and make it happen. 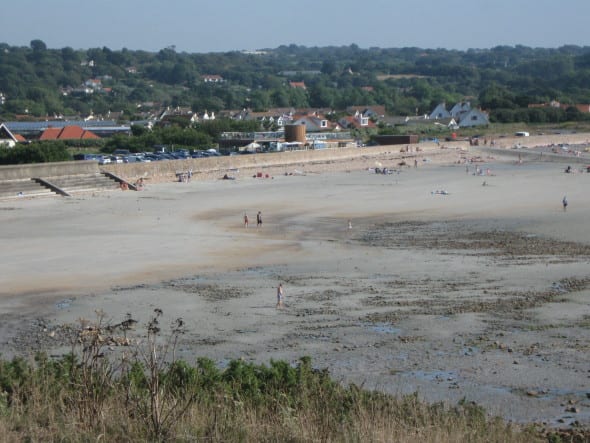 I discovered that Gatwick to Guernsey is only about an hour by plane. Airlines such as Aurigny air offer reasonable flights from around £50 per person when booked in advance. Bus tours are available but I was told upon my arrival that buses run on “island standard time” meaning that if you are on a tight schedule, you may find the relaxed arrivals and departures frustrating. Walking tours are popular during the warmer months as well, but this didn’t work for us as one in our party had a knee issue that would have made it too difficult. For those interested, accredited guides are available. Instead, we spoke with a local cab driver that said he would be happy to chauffeur us around for the day to all the highlights for a reasonable flat rate. In between sites, he did not idle but rather told us when he would be back and let us do our thing. Tourist information is available at the airport and the islanders, when approached, are most accommodating on every aspect of what to see.

The island is absolutely beautiful. We arrived late morning in August and the weather was glorious. Having said this, its place on the southernmost archipelago of the British Isles means Guernsey enjoys a much warmer climate than the UK with about 2,000 sunshine hours and less precipitation, year round. This contributes to a brilliant green, diverse topography that is quite breathtaking.

We began with Vale Castle, a fortification dating back to the Iron Age. A small group of us gathered to experience the cannon fire and learn the history after exploring the panoramic views. There is a small gift shop with various keepsakes and books about the island. I took the opportunity to speak with the young woman working there who was a Guernsey native. She explained that though she left for a while after her schooling, she was anxious to return to her home to settle, describing an idyllic childhood with a strong sense of community and the freedom to roam and play safely to her heart’s content. This feeling is evident, even upon visiting. The second largest of the Chanel Islands, Guernsey is about 9 miles by 5 miles in size with a population of around 62,000 and is known for Guernsey cows, outstanding tomatoes and unique sweaters. While horticulture and tourism are important industries, Guernsey’s main industry is offshore finance, boasting over 50 registered banks. Despite this, the town still has cobblestone streets and the untouched charm of the 17th century reflected in its buildings and shops. 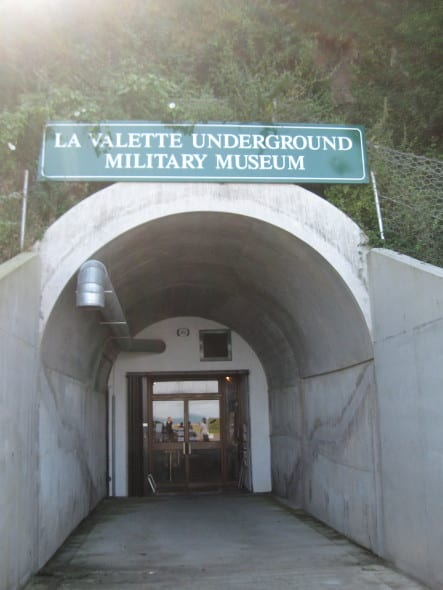 The La Valette Underground Military Museum was next and provided a fascinating collection of WWII items from the island’s occupation (1940-45). The museum tour is unguided; you are free to roam through the air-conditioned tunnels once used to store German U-Boats, while viewing numerous displays and militia collections. Quite amazing to us was that we were able to handle many of the items such as uniforms and helmets. Many things are for sale in casual boxes or baskets near the entrance. Unused German stamps, anti-aircraft shells and loose coins were very inexpensive. I realize for many Europeans, these items might not be considered a rarity, but for North Americans, especially my children’s generation, this was as real and as close as they had ever come to tangible markers of that period of history. As an aside, we had to mail the shell home at the airport, as it was not permitted on the plane. The small airport was the first time we had seen a sign prohibiting grenades in carry on luggage, but apparently this is a common problem for visitors leaving the island with war souvenirs!

We were told that The War Hospital where Germans were brought from France after D-Day on June 6, 1944 was not worth a view but we decided to walk through anyway. It is eerie, cold and dark. We could hardly imagine convalescing there in long rooms crowded with stark beds, but again, it provided the opportunity to stand quietly and picture what it must have been like, which is not hard to do given that everything is so unchanged. 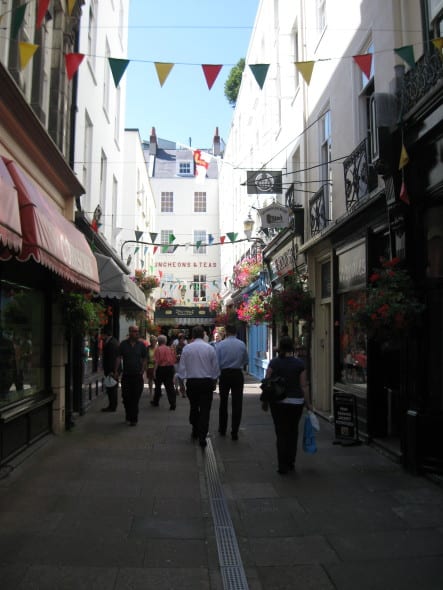 The small shops and walkways through town are quite charming. There were many options available for lunch and thanks to a local’s advice, we settled on a small restaurant with lovely front windows where we could see the water and people strolling by while we enjoyed fresh lobster. Many of the stores were tinier versions of those we were accustomed to in the UK, but others were unique and fun to peruse. Imagine our surprise when given back Guernsey currency for change! We kept our bill for a keepsake as they are not used anywhere but there. 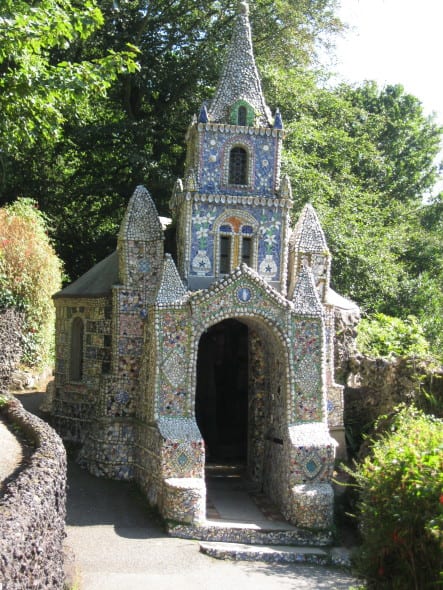 Late afternoon took us to a lush and rolling countryside. We stopped at a small church whose walls and fixtures were a mosaic of broken ceramics nestled in a leafy area. Of course the children found this delightful as it was tucked away and required crouching through small hallways and doors. If you enjoy agrarian landscapes as I do, I was happy to stand simply take in the emerald valleys while breathing the fresh, clean air. 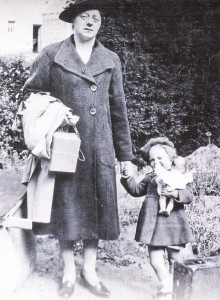 I wondered if this tight-knit community was affected by wartime evacuation orders for children, similar to the UK. At that time, the island had a population of around 40,000. Upon doing a little research, I found that:

In late June 1940, the first to leave the island were around 5,000 Guernsey children who were evacuated with their schools. Accompanied by hundreds of their teachers and ‘helpers’ – mothers with infants – these children fled their island, leaving their own parents behind. Many possessed only the clothes they were wearing, others had just one small suitcase containing a change of clothes and a sandwich. As many of the parents said goodbye to their children, they told them they would try to follow on the next available boat. However, on 28th June, Germany bombed Guernsey’s harbour, so that ‘next boat’ never arrived. (Pictured, Mrs Miriam Robilliard with her daughter Margaret, just as they were about to evacuate to England).

As a result, only around 17,000 men, women and children – just under half the population – escaped Guernsey before it was occupied by German Forces on 30th June. Many parents had to remain on Guernsey, not knowing where their children would end up in Britain, or whether they would ever see them again. They would not meet again for five long years.

Our driver shared similar bits and pieces of interest throughout the day. For example, a local motel bears strange smoke stacks on the tops, rumored to be a German gas chamber in progress when the war ended. Unexploded shells are not uncommon, with police bomb disposal teams summoned to move the devices to locations where they can carry out controlled explosions. Regardless of the time of year you visit or length of stay, Guernsey holds enticing events. Every year on May 9th, a Liberation Day celebration hosts activities and events in Saint Peter Port. A celebration of Guernsey’s Anglo-French culture, known as Le Viaer Marchi, is held on the first Monday evening in July and features music, crafts, folklore, witchcraft, traditional dishes and the local language, D’Gernesiais. In the fall, Halloween features a spooky ghost walk around the island from a black-cloaked, lamp-carrying guide, Annette Henry. Coach tours also make nightly tours through spooky country lanes and graveyards.

The island home of French author Victor Hugo is also open to visitors. Exiled for 15 years on Guernsey, Hugo is said to have found the inspiration for his works Les Miserables and Toilers of the Sea here. For a glimpse of what his life was like on the island, a 3-day self-guided tour entitled Victor Hugo Trail is available. Hugo delightfully described the Channel Islands as “fragments of France which fell into the sea and were gathered up by England”.

With our flight back to the UK departing in the late afternoon, we set aside our last hour for the some time by the sea. There is no shortage of bays on Guernsey: Fermain, Moulin Huet, the west coast of Port Soif and the Hanois Lighthouse are each stunning. With white sand and expansive views, we waded in the cool, clear water while children played nearby. Though our time was short it was a day to remember: worth the small splurge in our travel budget. At home in Canada, my daughter was recently asked if there was such thing as a perfect day, one that if given the chance, you would live all over again. She enthusiastically replied, “Of course there is! The day we went to Guernsey!”

The Soldier’s Wife by Margaret Leroy

The Book of Ebenezer Le Page by G.B. Edwards

A child’s War by Molly Bihet

Stay Where You Are, Then Leave

The Boy in Striped Pajamas 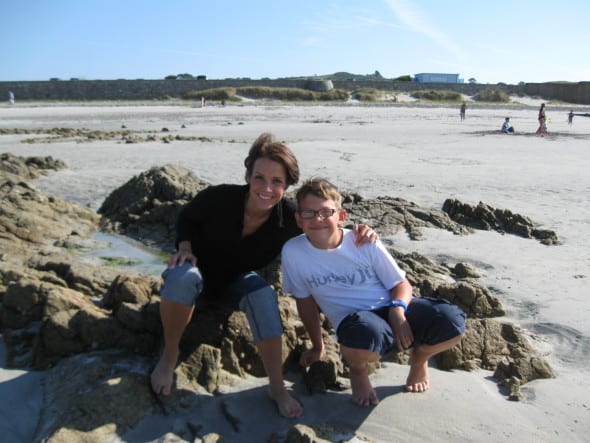 Lorelei Bachman is Canadian freelance writer/composer who is also a mother, an avid traveler and lover of all things British.  She travels to Europe often, and loves sharing her food and travel experiences with friends and family.