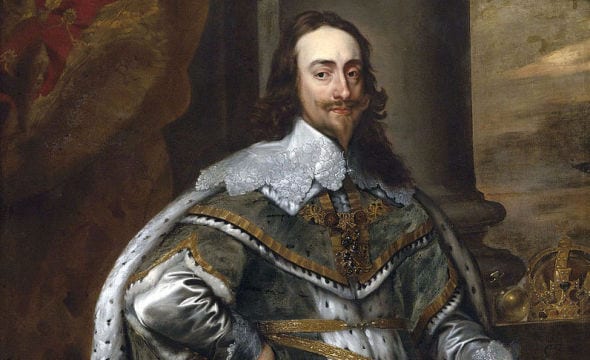 Charles I was not the most successful King in the history of the British monarchy but he was certainly the most stubborn. Ruler of the Kingdoms of England, Ireland and Scotland during the mid-seventeenth century, Charles’ unwavering belief in the king’s divine right to rule his country unencumbered by the demands of democracy and the rights of parliament led to a devastating civil war.

Charles attempts to convert the religious practices of the British Isles to those of Catholicism combined with his levying of taxes without parliamentary consent made him an unpopular king with the public. Charles megalomaniacal tendencies eventually led him to attempt to rule his kingdoms as a dictator, the final straw for his parliamentarian opponent Oliver Cromwell who helped lead the country into a brutal civil war that ended with Charles’ inglorious beheading.

Key Facts about Charles I

The Life of Charles I

King James VI of Scotland had two sons: the elder, popular and manly Henry, Prince of Wales, and the younger, small and sickly Charles. Unable to make the journey to England as a child, Charles was left behind in Scotland, only reunited with his family once he was able to walk the length of the Great Hall at Dunfermline without assistance. After Henry’s death in 1612, Charles became heir to the English, Scottish and Irish thrones of King James VI.

Charles was placed under the protective wing of King James’ closest advisor, Lord Buckingham. Often referred to as James’ ‘favourite’, there is much evidence to suggest that Buckingham was James’ lover and was lavished with affection and patronage from the King. In 1623 Charles and Buckingham travelled to Madrid in order to negotiate for a marriage between Charles and the daughter of Philip III of Spain.

Tensions between Catholics and Protestants in Europe were high, with disagreements over the heir to the throne of Bohemia eventually igniting the Thirty Years War. The trip was unpopular with the English public and parliament and proved to be unsuccessful. Charles and Buckingham returned to the UK frustrated and humiliated, and tried to convince King James to declare war on Spain.

James took the suggestion to Parliament which rejected his request for funds to raise an army. In retaliation Charles and Buckingham called for the impeachment of the high ranking officials who opposed the war, a move James was furious about, warning the pair that they would live to regret it. By the time Charles succeeded his ailing father to the throne in 1625 he and Buckingham were already in de facto control of the kingdom. In their unpopular negotiations with Spain, thirst for war in Europe and behaviour towards officials in parliament, the pair had already made many powerful enemies.

Charles contentious attitude towards religion in the English, Scottish and Irish kingdoms became apparent in his marriage to French princess Henrietta Maria. The pair were married on the 13th June 1625 in Canterbury and Charles delaying the opening of his first parliament until after the ceremony to avoid any objections to the match. Henrietta Maria was a Catholic and refused to take part in Charles coronation in 1626 at Westminster Abbey as the ceremony was a Protestant one.

On his engagement to Henrietta Maria, Charles had agreed in secret to provide the French with an English naval force to suppress the Protestant Huguenots at La Rochelle. But once they were married he gave orders for an English attack on the French coast to defend the very army he had agreed to suppress. The attack, led by the now universally hated Buckingham, was disastrous and led to Louis XIII’s siege of La Rochelle.

In 1628 Buckingham was assassinated, an occurrence that is thought to have devastated the King. Following Buckingham’s demise, Charles relationship with his wife is said to have grown from strength to strength and within a few months Henrietta Maria was pregnant with the first of their nine children.

Charles open support of ecclesiastic Richard Montagu, who religious propaganda supported a Catholic-derived, anti-calvanist doctrine, increased tensions between the monarchy and state. The commons refused to deliver finance for Charles’ proposed war with Spain and France and in retaliation Charles levied the public with arbitrary taxes. Parliament responded with the Petition of Right, an act that declared that Charles’ innovations in religion, taxation without consent of parliament, unfair imprisonment and the application of martial law to civilians was illegal. In a further act, parliament declared any citizen who took part in any of the activities named above to be an enemy of the state.

Charles immediately dissolved parliament and ruled as a dictator for almost 11 years. During this time the conditions for a full-scale revolt and civil war steadily matured. Charles attempted to force the Church of Scotland to adopt High Anglican practices which they strongly opposed. In 1639, the Scottish Parliament abolished episcopacy and established an army in the North of England. Charles was forced to call a ‘long parliament’ to deal with the invasion during which he impeached some of his most able advisors, accusing them of colluding with the Scots. On 4th January 1642, Charles stormed the House of Commons with an armed guard intending to arrest the ‘five members’ he had charged with high treason. The men had already escaped and the King was forced to withdraw having committed a grave rebuff to parliament and lost further credibility in the eyes of his supporters.

Civil war ensued. For more background on the English Civil Wars, this article will help. The English Parliamentary army combined with the Scottish to create a formidable force with Oliver Cromwell, the famously fierce and cruel leader, at the helm. Three years of fighting that tore England apart led to Charles’ surrender to a Scottish force in 1646. Charles refused to approve Presbyterianism as the official religion of Scotland and refused his captor’s demands for a constitutional monarchy. The King was handed over to the English Parliamentarian commanders who spent two years negotiating the terms of a new relationship between monarchy and state. Charles would not budge on his position and would make no concessions. Cromwell’s New Model Army had control of England by 1648 and soon after, in 1649, Charles was tried, convicted and beheaded for treason. The English Commonwealth was born.

The Legacy of Charles I

Charles I’s reign challenged the powers of parliament to such a point that civil war broke out in England, the effects of which were felt by its people for many decades afterwards. Charles’ capture and execution left Oliver Cromwell in a position whereby he was able to extinguish all military opposition in Britain and Ireland and establish The Protectorate with himself as Lord Protector. For the first time England became a Commonwealth.

Charles was repeatedly ineffectual in his engagement with Europe from a political and military point of view and his exploitation of the British citizens to fund his war campaigns made him very unpopular with the common man.

Charles believed that he stood for social stability and was a pious defender of his faith so for some, his death was a martyrdom. Following his execution a memoir emerged named The Royal Portrait. An effective piece of Royalist propaganda, the book helped to turn Charles I into a martyr King who died for his religious and political beliefs.

Throughout his lifetime Charles amassed one of the most impressive art collections in the world. On his death, Charles is thought to have had a collection of over 1700 paintings by the likes of Titian, Caravaggio and Rembrandt, an expensive hobby that added to the financial strain of the monarchy on the nation.

Locations Related to Charles I