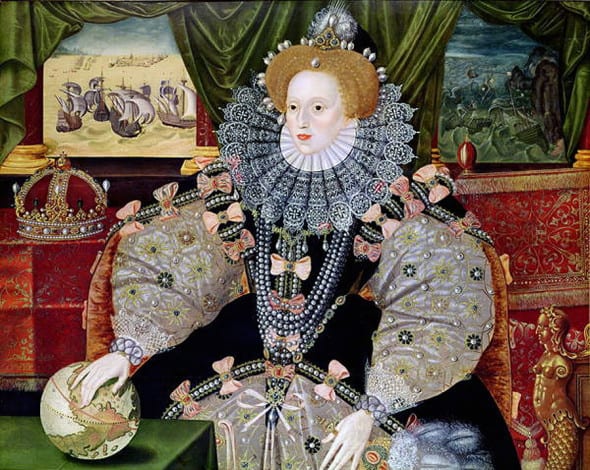 The fifth and final monarch of the highly influential, although relatively short-lived, rule of the Tudor dynasty, Elizabeth I, was the second daughter of Henry VIII. Elizabeth’s relationship with her family was tense to say the least. Her mother was executed by her father before she was three years old, she was proclaimed a bastard, rejected by her half-brother, imprisoned by her half-sister and had Mary Queen of Scots executed for treason. Despite these Tudor complications, Elizabeth’s reign lasted a long and overall successful 44 years. Cautious in foreign affairs and relatively tolerant in matters of religion, Elizabeth I helped to stabilize the English economy and strengthened the role of parliament. Remaining unmarried, Elizabeth inspired a popular following who admired her as a virginal goddess-like figure and was known to be a charismatic, if difficult, leader. Ruling England at a time when the arts flourished and discovery was high on the agenda, the Elizabethan era is remembered as a golden age of creativity and exploration.

Key Facts about Elizabeth I

A Brief Look at the Life of Elizabeth I

Elizabeth was the first daughter of King Henry VIII and his second wife Anne Boleyn. Born within wedlock and thus legitimately, Elizabeth should have automatically been third in line for the throne after her younger brother, Edward, and older sister Mary. However, the breakdown of Henry and Anne’s marriage and Anne’s subsequent execution under charges of adultery left Elizabeth both motherless and illegitimate.

Elizabeth’s childhood was difficult and her future uncertain. Although her mother was beheaded before she was three years old, Elizabeth was not expelled from the royal circle and was raised and educated at Hatfield Palace by a series of highly sought-after tutors. By the time she reached adulthood, Elizabeth was one of the best educated women in England and spoke six languages fluently.

Following Henry VIII’s death, Elizabeth’s brother Edward became King of England at an age of just nine. When he died six years later his will made clear that the Succession to the Crown Act of 1543 was not to be followed and both Mary and Elizabeth were excluded from the succession. He named Lady Jane Grey his heir, granddaughter of Henry VIII’s sister. Jane was proclaimed Queen but was deposed after only nine days and Mary became Queen.

On the surface, Mary and Elizabeth were sisters, allies and friends, although Elizabeth swore to being a true Roman Catholic, her education had been a protestant one and the sisters found themselves on opposite sides of a huge religious divide. When Elizabeth was implicated in Sir Thomas Wyatt’s revolt against Queen Mary, Mary had her sent to the Tower of London and then placed under house arrest to protect her throne. Mary’s popularity waned when she married Prince Phillip of Spain, a devout Catholic, and when Mary died and Elizabeth succeeded her the protestant masses were overjoyed.

Mary Queen of Scots, Elizabeth’s cousin, questioned Elizabeth’s legitimacy while on the Scottish throne, a move that would make life difficult for her later when she was forced to abdicate to her one year old son and seek refuge in England. In order to keep Mary Queen of Scots away from her Catholic enemies in Scotland and France, Elizabeth detained her in England, a detainment that ended up lasting a total of nineteen years. The freeing of Mary and her claim to the English throne became the focus for a huge Catholic rebellion. The other claimant to Elizabeth’s throne, Queen Mary’s husband, Phillip II of Spain, was also Catholic.

Queen Elizabeth is thought to have been more tolerant than Queen Mary in her approach to religious differences in her kingdom but support for Mary was wide-reaching and deeply-felt, particularly among English Catholics who were being persecuted. Queen Elizabeth is thought to have imprisoned and executed a number of Catholic Bishops who refused to acknowledge a revised Book of Common Prayer recognizing her as the Head of the Church. International Catholic powers in Rome, Spain and France financed and assisted Mary in her plots against Elizabeth and in a 1570 bull, Pope Pius V announced that all of Elizabeth’s subjects were to be released from their allegiance to her, condoning the withdrawal of the Queen from her throne.

Elizabeth reacted by making ‘the intent’ to convert English subjects to Catholicism a treasonable offense, carrying the death penalty. Many priests were executed and a cult of martyrdom ensued. Elizabeth’s treatment of Catholic enemies in Ireland is said to have been particularly brutal and permanently affected Anglo-Irish relations. Eventually, after being shown proof of Mary Queen of Scot’s involvement in plots to assassinate her, Elizabeth signed her death warrant and she was beheaded at Fotheringhay Castle on 8th February 1587.

Soon after Philip II, Queen Mary’s husband and claimant to the English throne, assembled the Spanish Armada, a navy of over 130 ships that intended to invade England, overthrow the Queen and re-establish Roman Catholicism as the state religion. After suffering dramatic losses on the coast of Ireland, the Spanish left, defeated.

Despite this success, England remained at war with Spain and was less successful in future costly campaigns. Elizabeth’s wars put a financial strain on the crown and the country, and left a huge deficit for her successor. The threat of invasion from Spain through Ireland and from France through Scotland was real and constant.

One of the Queens main allies in her ongoing sea battles with the Spanish was Francis Drake, whom she had knighted for his circumnavigation of the globe between 1577 and 1580. The exploratory work of Drake and his contemporaries Walter Raleigh and Humphrey Gilbert led to the establishment of the East India Company in 1600 and the beginning of a huge colonial empire that reached its peak in the Victorian Era.

However in the later years of Elizabeth’s reign, popular opinion of her fell. The standard of living of many of her subjects had dramatically declined thanks to the cost of ongoing wars, higher taxes and poor harvests. This economic recession coincided with a period of greater repression of Catholics in England. In 1592, Elizabeth authorized commissions that allowed her to spy on Catholic households and interrogate Catholic subjects at will.

Elizabeth died at Richmond Palace on 24th March 1603 of complications related to old age. The date of her accession became a national holiday, one that lasted over 200 years.

Legacy of Elizabeth I

Elizabeth chose never to marry, instead using her potential to become a wife as a political tool. Known as ‘The Virgin Queen’, ‘Gloriana’ and ‘Good Queen Bess’, Elizabeth’s reign is remembered as one of triumph. She married herself to England and sacrificed her personal happiness in order to rule the country well. Popular with the majority of her subjects, for the majority of her reign, Elizabeth made a series of speeches during her lifetime that have gone down in history.

Late in her reign, she addressed Parliament as such, ‘there is no jewel, be it of never so high a price, which I set before this jewel; I mean your love.’ The Elizabethan era is remembered primarily for world-changing voyages of discovery and exploration and the flourishing of the arts in England. Theatre, literature and painting thrived and Queen Elizabeth attended Shakespeare’s first performance of A Midsummer Night’s Dream.

Locations Related to Elizabeth I