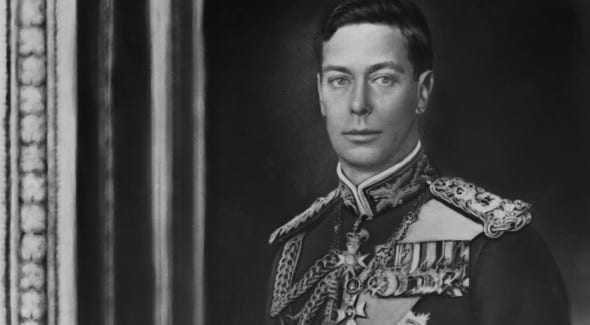 George VI’s reign is remembered as a time of hardship, suffering and uncertainty. After serving in the Royal Navy and Royal Air Force during World War One, George unexpectedly found himself as the King of The United Kingdom during World War Two. Following his older brother Edward VIII’s shocking abdication of the throne, George embarked on a fifteen year long reign that saw the eventual break-up of the British Empire, the beginning of the Commonwealth, the Second World War and the Independence of India and Pakistan. For his public displays of support for the besieged people of London during the Blitz, his respectable family life and his belief in equal rights for all men and women, George VI is one of Britain’s best-loved monarchs.

The life of George VI

George VI, known informally as Albert, was born the second son of King George V, formerly Prince George Duke of York, and Queen Mary. George was the great-grandson of Queen Victoria and was born on the 14th of December, the anniversary of the death of Victoria’s beloved husband, Albert. In memory of his great-grandfather George, was named Albert Frederick Arthur George and known formally as “His Highness Prince Albert of York” from birth. Behind his grandfather, father and older brother, Albert was fourth in line to Victoria’s throne.

As with most aristocratic families of the early 20th century, Albert was mostly separated from his mother and father during his childhood. Young Albert suffered from ill health and was beset by various developmental problems. The young prince had stomach issues that lasted well into adulthood, problems with his legs that forced him to wear corrective splints and a stammer that made speaking in public difficult. It was this verbal tic that inspired the 2010 film The King’s Speech in which the King, played by Colin Firth, overcomes his stammer with the help of a therapist in order to address the nation at the outbreak of World War Two.

Albert trained to become a naval officer on board HMS Cumberland and HMS Collingwood. In 1916, Albert saw active duty during the World War One Battle of Jutland. In 1918, he transferred from the Royal Navy to the Royal Air Force where he became a fully qualified pilot and commanding officer of a squadron on the cadet wing. Albert studied at Trinity College, Cambridge following the First World War and took a more active role in the duties of the royal family. As President of the Industrial Welfare Society, Albert became interested in British Industry, particularly the working conditions of people from low income backgrounds and was nicknamed the ‘Industrial Prince’.

In 1923 Albert finally married the woman he had been pursuing for the last three years, Lady Elizabeth Bowes-Lyon. Albert chose Lady Elizabeth to be his wife without the permission of his family or the church and as Lady Elizabeth was not of royal blood this was considered a modernizing move. The couple’s marriage was a great success and with Elizabeth’s support, Albert sought the help of professional speech therapist Lionel Logue and gradually overcame the stammer that had plagued his adult life. Albert and Elizabeth had two children, Elizabeth, who succeeded Albert as Queen Elizabeth II and Margaret. Both girls were raised by their parents within the close family household of 145 Piccadilly.

When King George V died on 20th January 1936, Prince Edward succeeded him to the throne as King Edward VIII. For many Edward was an undesirable King. King George V himself had expressed his wish that Albert become King before he died but Edward ascended as the law dictated. Less than a year later, Edward abdicated his right to the throne in order to marry his lover Wallis Simpson, an American socialite and divorcée. Some believe Edward was forced to abdicate his position while others believe that he was happy to do it. Either way, the crown now belonged on Albert’s head and he reluctantly took control of the kingdom.

The transfer of power was not straight forward as Edward thought he should retain the title of ‘His Royal Highness’ as well as the titles, position and properties he had formerly enjoyed. King George VI disagreed and although he bestowed Edward with the new title ‘His Royal Highness the Duke of Windsor’, he also ensured that the new title made any wife or children of Edward’s ineligible for royal titles. King George was forced to buy Balmoral Castle and Sandringham House from Edward as these were private properties that once belonged to Queen Victoria and did not pass automatically with the crown.

During his first years as King George, as Albert was now known, he made state visits to France, Canada and the United States of America, becoming the first British monarch to ever set foot in the USA. These public displays of friendship were timely as within the year, Great Britain was at war with Germany. King George VI worked closely with Prime Minister Winston Churchill in the war effort and remained resident at Buckingham Palace in London throughout the war, despite the palace being bombed nine times.

Keeping a high profile and instilling the public with a strong sense of British identity, the King and Queen visited heavily bombed areas of East London and munitions factories throughout the United Kingdom during the war. King George also made visits to military forces abroad in France, North Africa and Malta. In June 1944, King George visited British troops on the beaches at Normandy, ten days after D-Day.

On VE day, the King and Queen’s official residence of Buckingham Palace was at the center of the country’s celebrations with crowds reportedly chanting ‘We want the King’ outside the building. The King emerged and invited Prime Minister Winston Churchill to appear on the balcony alongside him to the crowd’s rapturous applause; an act that secured King George VI’s popularity with the people.

Clement Atlee took over as Prime Minister of the United Kingdom following the Second World War and, overseen by King George, was responsible for ushering in the rapid transformation of the British Empire from one kingdom into a series of associated but independent states known as the Commonwealth. The segregation of India and Pakistan took place in 1947 and King George was no longer known as the Emperor of India but was instead the Head of the Commonwealth. Three independent states left the commonwealth in the next few years including Burma, now Myanmar, Palestine and the Republic of Ireland.

The intense stress and hardship of George VI’s reign severely damaged his health. The war had ruined Britain’s economy, a situation made bleaker by the dismantling of the British Empire and the beginning of the Cold War. The tensions of the post-war period exasperated King George’s health problems, which by this time included lung cancer and arteriosclerosis. The King failed to recover from an operation to remove his left lung which contained a malignant tumor and he died in his sleep on 6th February 1952, aged 56. King George’s daughter Elizabeth and her husband, the Duke of Edinburgh, were part-way through a tour of Africa when she heard of his death and she returned to the UK as Queen Elizabeth II.

Despite the hardships experienced by the British people during King George VI’s reign, the public opinion of the monarch was a favorable one. The people had endured the desperation and loss of World War Two and saw the influence of imperial power wane and yet public faith in the monarchy was high. King George spoke at the first UN assembly of 1946 in London, proclaiming ‘our faith in the equal rights of men and women and of nations great and small’.

The King instituted the George Cross and George Medal during his reign in acknowledgement of the bravery of individual citizens and nations during warfare. George was awarded the Ordre de la Liberation by the French government following his death, Winston Churchill was the only other individual to receive the award following 1946.