You are here: Home / British History / The Monarchs: Richard I (1189-1199) – Richard the Lionheart – The Crusader Who Tried to Seize Jerusalem 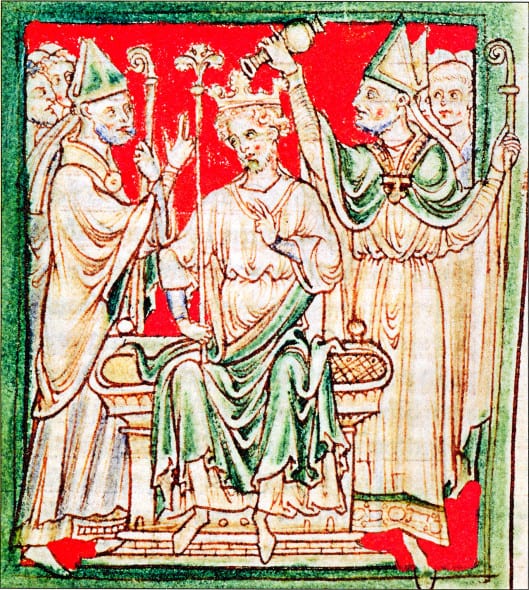 The reign of Richard the Lionheart was dominated by the Third Crusade, his ill-fated and costly siege of Jerusalem. Richard supported his father, King Henry II, in battle from a young age and became Duke of various French territories in his twenties. Despite spending as little as six months of his reign resident in England, Richard I is said to have been adored by his English subjects who thought him to be a great warrior and pious hero.

Key Facts about Richard the Lionheart

The Life of Richard I

Richard was born in England and lived there until he was around 8 years old. The third son of King Henry II, great-grandson of William the Conqueror, and Eleanor of Aquitaine, Richard was never expected to ascend to the English throne.

Before his death, Henry II had planned to divide his and Queen Eleanor’s lands between his three eldest sons. Henry was to control England, Anjou, Maine and Normandy; Richard would control Aquitaine and Poitiers and Geoffrey would control Brittany. Although Henry II was already ill and Henry the Young was the natural heir for the English throne, his impatience got the better of him and on the advice of his mother, Queen Eleanor, he organized a revolt against the King. Henry’s brothers Richard and Geoffrey supported his revolt and all three sought the protection and support of King Louis VII of France.

Following years of war across England and France, the family were reconciled with Richard receiving a ‘kiss of peace’ from Henry II during a peace treaty on the 23rd of September, 1174. Peace did not last long, however, and over the next ten to fifteen years, fighting between the King and his sons continued until finally, in 1183, King Henry the Younger was killed in battle.

In 1189, Richard again tried to take Henry’s throne by force and defeated Henry II’s army at Ballans. The crown slipped from Henry II’s weary head two days later and was placed directly onto the head of Richard, who was now next in line to the throne. Richard was considered worthy of the English crown by many of the most influential people of the time, having proven his political agility and military skill by suppressing revolts by the rebellious nobles who repeatedly challenged his father’s authority.

Richard officially became Duke of Normandy on the 20th of July, 1189 and was crowned King of England on the 3rd of September, 1189 at Westminster Abbey. During his coronation, Richard banned all women and Jews from the Abbey and had any Jews that did attempt to attend stripped and flogged. These actions instigated a pogrom massacre in London where many Jews were killed and Jewish homes and businesses destroyed. Richard distributed a Royal Writ ordering that the violence against Jews must stop but it seems this was loosely enforced and the violence spread to other cities such as York and Norwich.

Despite this civil unrest Richard continued with his plans to launch a Third Crusade to Jerusalem, hoping to seize back the holy land from its current ruler, Saladin, with the help of King Philip II of France. In order to raise a crusader army Richard recklessly liquidated positions and lands belonging to the crown. He plundered the treasury and made all those occupying official posts in the Kingdom pay huge sums to retain them. During his rapacious pursuit of quick cash he was said to announce ‘I would have sold London if I could have found a buyer’. Leaving his brother John in charge of England, Richard set off on his crusade in the summer of 1190.

Over a year later Richard was no closer to Jerusalem than Sicily. It is around this time that Richard’s mother Eleanor of Aquitaine, who was by now 69 years old, traveled to Sicily to introduce Richard to the young Berengaria of Navarre. It was sound tactical judgment to lay claim to Navarre considering its position bordering the Gascony area of Aquitaine, so Richard agreed to the marriage. Soon after, Richard captured the island of Cyprus, occupying a key strategic position in the maritime channels to Jerusalem and benefiting from much needed financial gain. Richard and Berengaria were married on May 12th, 1191 at the Chapel of St George and enjoyed a double coronation as Richard was crowned King of Cyprus and Berengaria was crowned Queen of England and Cyprus.

Richard and his forces aided in the capture of Acre, on the coast of what was then Saladin’s Empire in June of 1191. Following the seize, Richard and Philip seriously offended Leopold V, Duke of Austria by removing Leopold’s banner from where it was raised, a slight the Duke took as a signal to leave the crusades. Philip left soon after, his relationship with Richard tarnished by Richard’s insistence on claiming all of Cyprus for himself.

Richard’s crusading army made two major advancements towards the capture of Jerusalem in the following months, but each time they came within sight of Jerusalem only to turn back without launching an attack. Dissension among the crusading army’s leaders, poor weather, and news from England that Philip and Richard’s brother John were plotting to overthrow him, all led Richard to call off his great crusade and come to a settlement with Saladin. The pair came to an agreement on the 2nd September, 1192 and embarked on a three-year truce.

Richard’s journey home was not an easy one. Bad weather forced him to dock his ship at Corfu, then ruled by a Byzantian emperor who considered Richard an enemy due to his capture of Cyprus. Richard escaped only to become shipwrecked on the coast of central Europe. Richard was captured near Vienna by Duke Leopold V of Austria, the same Duke he had humiliated in Acre. The Duke held Richard in Durnstein Castle before handing him over to Henry VI, Holy Roman Emperor who held him in Trifels Castle. Both Duke Leopold and Henry VI found themselves excommunicated by Pope Celestine for their part in Richard’s detention as it was illegal to imprison a crusader.

The emperor demanded 150,000 marks (65,000 pounds of silver) be paid for Richard’s release. At the time, this represented between 2 to 3 times the annual income of the English crown. Eleanor of Aquitaine worked hard to raise the funds for her son’s release by taxing the English people heavily for over a year. John, Richard’s brother, and his ally King Philip, did not wish to see Richard return and tried to pay the Emperor to keep Richard imprisoned but to no avail. Richard returned to England in February of 1194.

During his imprisonment, Philip had taken control of Normandy. Bizarrely, Richard forgave his brother John for his revolt, securing his claim to the throne on Richard’s death. Richard left for France with his army, waging war with King Philip to regain Normandy for the English. He was successful and built the vast Château Gaillard high up on the River Seine in order to protect his land.

Legend has it that Richard I was killed by a young boy employed as an archer, defending his castle walls. It is thought that Richard had killed the boy’s parents. The wound caused by the arrow became gangrenous and, knowing his days were numbered, he ordered that the boy be brought to him so that he could ask for his forgiveness. Richard died on the 6th day of April, 1199.

Legacy of Richard I

Richard is an iconic figure, remembered for his wars and crusades. An accomplished military engineer, Richard’s skill at organizing an army and the logistics of defending a castle have gone down in history. Richard’s peace-treaty with Saladin, Sultan of Egypt also had a lasting effect on the global politics of the middle ages as a friendship emerged between the Muslim and Christian adversaries and opened up the possibility of negotiation between people of differing faiths.

Some believe Richard to have been a good King, a kind and generous man and a talented and brave soldier. But there are also those who consider Richard to have been a terrible King, one who cost England dearly, both in fortune and in lives, for his unsuccessful crusade and his foolish capture and ransom. Richard was a man of war and his love for England extended only as far as her resources, which he plundered mercilessly to fund his blood lust. He spent no more than six month in England during his ten years’ reign.

Locations Related to Richard I