Editor’s Note: This is the first article in a series of 5 articles about Britain’s greatest gardens. First up is our personal favorite, Stourhead in Wiltshire.

Stourhead is a large landscape garden in Wiltshire, built in the 18th century. It epitomizes the Picturesque style of garden design. It has a large lake with numerous classical-style features and Italianate buildings dotted around it. The garden is a beautiful walk at all seasons along winding pathways through trees and with various views across the lake.

The Story of Stourhead 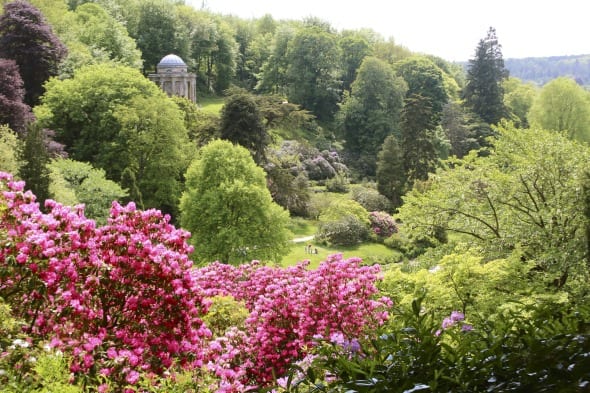 Many of the estates of the British aristocracy are worlds unto themselves. The Stourhead estate is no exception. Totalling 2,650 acres, the estate includes a Palladian Manor House, a village called Stourton, woodlands, farms and a garden. The estate is at the source of the river Stour, in Wiltshire and was the property of the Barons of Stourton from the 13th century until 1714, when the estate was sold to the Hoare family, who were wealthy bankers. The estate remained in the family until it was transferred to the National Trust in 1946.

Shortly after acquiring the estate Henry Hoare I had the original manor house torn down and replace with a house designed in the Palladian style that was in vogue at that time. The new Manor House was completed in 1725 and became a repository for the family’s library and art collection for the next 200 years. Henry Hoare II inherited the property and having spent time in Europe taking the Grand Tour – an extended trip around Europe that was part of a young gentleman’s education – he was inspired to construct a revolutionary garden based on the French and Italian landscapes he had seen, and especially on the representations of these gardens seen in landscape paintings. 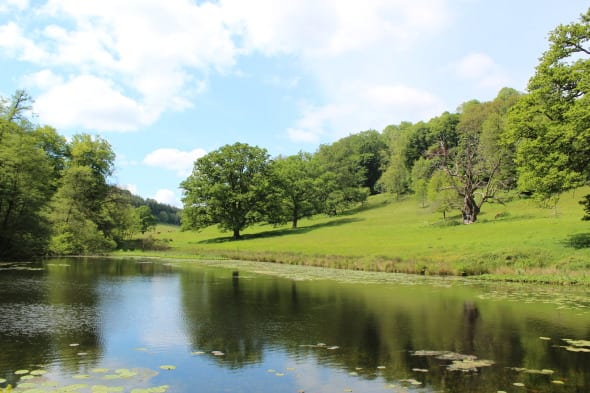 Prior to this time, most gardens were designed on the principles established during the Renaissance, which emphasised geometry and straight lines. This was particularly apparent in the use of vistas. These were long sight-lines consisting of grass flanked by trees. The trees were often clipped into hedges and the lawn areas could be used for riding or festivities. Where sight-lines intersected there would usually be a pond, fountain, statue or obelisk to mark that point and to be visible along the vistas. Closer to houses these vistas gave way to square or rectangular areas decorated with ornate designs in clipped plants or coloured gravels, called parterres. Planting was restricted and more interesting plants were grown in pots and arranged along the various terraces and walkways. The goal was to impose a precise geometry on the natural landscape and carry out the task assigned to Man by God, the perfection of an imperfect world.

By the early 18th century this approach had degenerated into more and more grandiose designs, with endless vistas and enormous parterres requiring armies of gardeners. The time was ripe for a change and it was in England that this change happened. 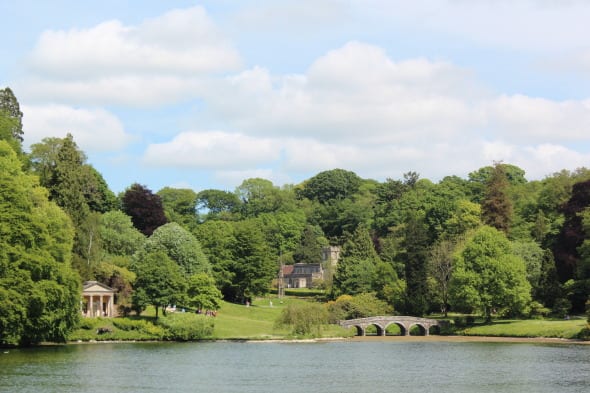 Alexander Pope, who was born in 1688, is usually remembered as a poet, but he was also an avid gardener and had an estate at Twickenham. He was the first to preach a new approach to gardening, which involved balance, not simple symmetry; relative modesty, not ostentation; and most revolutionary of all, curves, not just straight lines. This idea was indeed revolutionary after the dominance of geometry for so long. In one poem he also wrote “let Nature never be forgot, consult the Genius of the Place in all”. In other words, he said that the character of the site should be respected and incorporated into the design, not obliterated under geometry. A garden should contain natural features that expressed nature, rather than suppressed it.

Pope had a gardener called William Kent, who looked to art for inspiration and was inspired by the dramatic paintings of natural landscapes that were popular at the time. This meant ending the domination of the straight line and the need, as another poet of the time put it, to “show to the pupils of Design, the triumphs of the Waving Line”. This was a deeply radical idea in a way that can be hard to grasp today. The use of curves and rounded contours became the style known as the English Landscape Garden. Since an important goal was to create pictures that were viewed from various vantage points, it is often also called the Picturesque. Historians have noted that women were beginning to play a more important part in society and male views were being tempered and softened by the introduction of more feminine principles, leading to a softening of the hard edges of earlier landscapes.

William Kent went on to design a number of significant gardens, but although he never worked at Stourhead, the garden there is the epitome of the Picturesque style. Starting around 1742 and working with the architect Henry Flitcroft, Henry Hoare built a garden almost unique for the time, which created a series of landscape views decorated with ornamental buildings and varying as one walked through the garden – a private Grand Tour in fact. 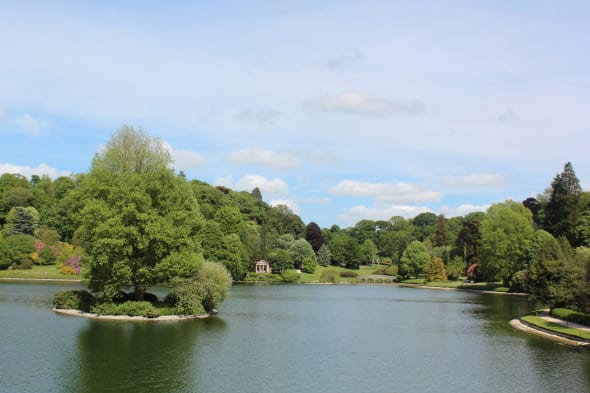 The heart of Stourhead is The Lake, which was created by damming a small stream behind the village of Stourton, which, with the waters also flowing in from the springs that are the source of the river Stour, flooded a small valley. The earthen dam and overflow can be seen at the end of the lake. A pathway runs around the lake, approaching or moving away from it to reveal a series of views, each one different, from several vantage points. The garden is inward-looking and makes little use of the wider landscape beyond. It was designed as a complete internal experience, to stimulate memory, reflection and musings on philosophy and life.

The only plant material used was trees. By skilful planting of groups and clumps of woodland, views are alternately hidden and then suddenly revealed, creating a series of surprises as the views unfold while moving around the lake. This element of surprise creates a sense of narrative or sequence to the trip around the lake, which would have been on foot, horseback or carriage, depending on the season, weather and the occasion.

In the early 19th century plantings of rhododendron, azalea, laurel and other flowering shrubs were added by Hoare’s grand-son and when these were in bloom they became a feature of the garden. Towards the end of the 20th century, accompanied by considerable controversy, most of these later plantings were removed to restore the original appearance and views of Hoare’s design.

The walk around the lake is 1½ to 2 miles long, depending on exactly what route is taken. Hoare’s intent was to create a series of pictures featuring various buildings in the classic style, reminiscent of his trip around Italy. Flitcroft designed several buildings in the style of temples: The Temple of Ceres, built in 1744; the Temple of Hercules and a smaller-scale copy of the Pantheon in Rome, added in 1754; and the Temple of Apollo in 1765. Inside these temples there are various statues of classic figures such as Hercules and Flora. Latin inscriptions are often placed over the entrances. Mastery of Latin and Greek and a detailed knowledge of the classics and of mythology were the main education of a gentleman. 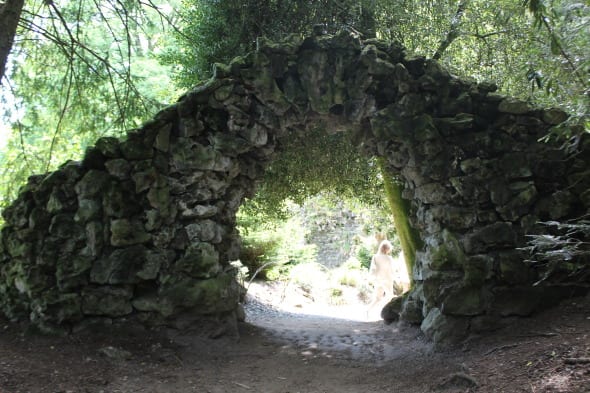 On the far-side of the lake from the house a dark pathway leads to a Grotto area, with two caves containing statues and pools. Grottos were a popular garden feature at the time, and Alexander Pope also had one in his garden. These were representations of the underworld, or of the unconscious, as well as being cool, shady places to retreat to on hot summer days.

Other features include the Bristol High Cross – a gothic spire brought to the garden from the city of Bristol, an Obelisk and the Gothic Cottage or Hermitage. This is a small stone cottage often found in other gardens of the period. Some owners went so far as to hire someone to live in isolation in their Hermitage, as a hermit, to add a frisson to the garden tour. It does not appear that Hoare did so.

In the course of renovation, many landowners swept away the villages on their estates or moved them out of sight. At Stourhead the village of Stourton was retained, with some beautification, as a visible feature. Other later additions were the Palladian Bridge at one end of the lake and Alfred’s Tower on a nearby hill, where legend had it that in 879 the Saxon king Alfred the Great, had camped before defeating the Danes and uniting the British tribes.

Stourhead was followed by a fashion for the Landscape Garden that swept England. Its main practitioner was Lancelot “Capability” Brown who developed a formula for what were referred to as Improvements and whose style became the only approach to informality possible. He converted hundreds of estates and created much of the ‘look’ of large English gardens.

Because Stourhead was such a self-contained world, with its features and activities it has also been proposed as the proto-type of the contemporary Theme Park.

Stourhead Landscape Garden, by Oliver Garnett (2000). This is the National Trust guidebook.

Stourhead is also discussed in numerous books on the history of gardens and landscaping.

Stourhead Garden is near Mere, Wiltshire. Mere is a small town east of Glastonbury and a little south of the town of Warminster.

The gardens are open every day of the year, including all holidays, except for December 25th. Consult the National Trust for opening-hours each day, which vary with the seasons. http://www.nationaltrust.org.uk/stourhead/opening-times/ 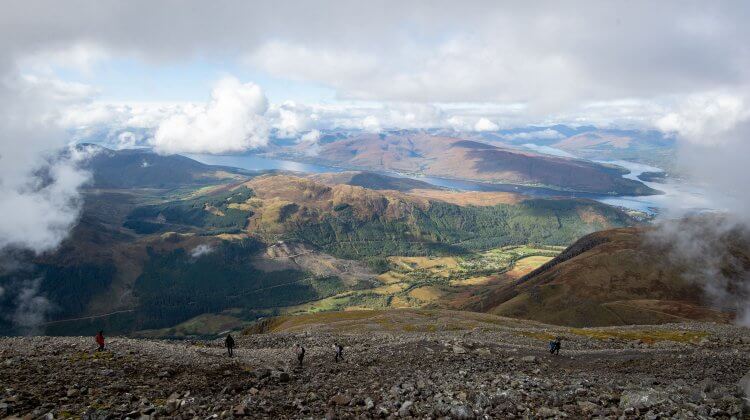