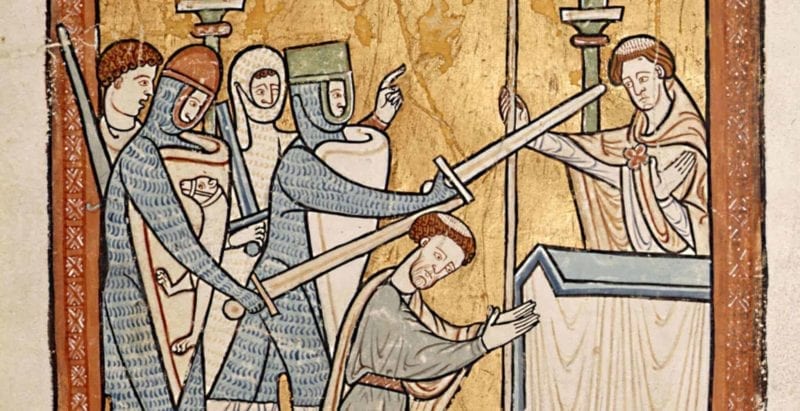 Until King Henry VIII officially broke with the Catholic Church to start the Anglican Church, there had long been a struggle between the Crown and the Church over whose authority was superior.  While the two institutions had often been able to live with one another, the greatest conflict between the two prior to the Tudor era was the murder of Archbishop Thomas a Beckett.  On December 29, 1170, four of Henry II’s knights entered Canterbury Cathedral and killed him within the church.  However, whether Henry was involved and the extent to which he intended Beckett’s death has long been debated.

In happier times, Thomas Beckett was Henry’s Lord Chancellor, essentially the right-hand man to the Crown.  Henry even fostered his son in Beckett’s house, as was the custom at the time.  It could have easily been said that the two held each other in great regard, but it was not to last when Archibishop Theobold of Bec (who had recommended Beckett as Chancellor) died in 1161.  Beckett had served as Archdeacon of Canterbury under Theobold and was his natural successor as Archbishop, a position to which Beckett was elected in 1162.  The relationship between Henry and Beckett soon soured as Beckett became Rome’s representative in England.

At the time, Henry figured that this was the best outcome, as Henry thought Beckett’s time in his service might result in the new Archbishop giving the Crown leeway to govern without interference and perhaps even influence the Church.  It wasn’t a year before Beckett’s true allegiance was put to the test.  In 1163, a Canon (a priest who served as an administrator) was accused of murder.  At the time, it was customary for the Church to try its own members and the Canon was tried and subsequently acquitted.  The public felt the Church was unduly biased against one of its own members and cried for justice, which resulted in Henry attempting to bring the Canon to be tried in his own court.

Beckett instead banished the priest, feeling that this would be an adequate compromise.  Henry then attempted to change the law to give his courts authority over clergy, which prompted resistance from Beckett.  This, in turn, caused Henry to summon Beckett to Court on the pretence of accounting for sums of money that Beckett had been responsible for during his time as Chancellor.  Beckett instead went into exile for the next six years and continued his ecclesiastical duties while being a thorn in Henry’s side, excommunicating several royal officers, which the Pope had instructed him not to do.  Rome had hoped it could mediate peace between the two sides, but none was to be reached.

Henry’s son was then crowned king as “Henry the Younger”, while Henry was still alive, by the Bishop of York, an affront that finally permitted the Pope to let Beckett punish Henry.  Beckett’s interdict finally forced Henry to the negotiating table and allowed Beckett to return to England on July 22, 1170.  However, before Beckett landed, he excommunicated three more of Henry’s officers:  Roger of York Josceline of Salisbury, and Gilbert Foliot, the Bishop of London.  Beckett claimed he could pardon Josceline and Foliot, but not Roger, which caused Roger to turn to the other two to implore the king to do something.

The news was met with frustration by Henry, who supposedly uttered the now-famous line “Will no one rid me of this troublesome priest?”  Four of Henry’s knights, taking this as a command, then set upon Beckett in the cathedral and put him to death for his “treason” against the Crown.  Accounts of the murder claim that the four knights sailed to Canterbury and first attempted to get Beckett to leave the Church to face the King.  When Beckett refused, the four left the Church and came back the next day to force Beckett again.  In the ensuing struggle, a fatal blow was struck to Beckett’s head, and the knights proceeded to hack at the Archbishop, ensuring his death.

Whether Henry’s order was in earnest has always been a point of contention, though the fallout of Beckett’s death would provide evidence to the contrary.  For one, Henry was allegedly horrified at the news of the Archbishop’s death.  He donned sackcloth and fasted for three days in penitence for any role he felt he played in the assassination.  What’s more, the four knights who committed the deed, having done so as a way to curry the King’s gratitude, immediately fell out of favour.  However, the King failed to arrest all four and advised them to flee to Scotland.  He did not seize their lands and eventually allowed them to return.  The knights were eventually excommunicated by Pope Alexander III and forced into a crusade as penance.  What happened to each of them after that is subject to speculation.

Rightly or wrongly, the bulk of the punishment for Beckett’s death fell on Henry.  The Church and the public unequivocally put the blame on the Crown, even though it was not evident that his words were spoken in earnest.  He was not permitted to appoint any bishops for ten years.  He was also forced to commit public penitence in Avranches Cathedral, where he swore to provide money for knights to go to the Holy Land, restore the property of the church of Canterbury, not to obstruct any of the clergy’s appeals to Rome, and to abolish all laws prejudicial to the Church.  In effect, Henry lost his fight with the Church when Beckett died, and while it was little trouble during his reign, it kept these conflicts brewing until the English Reformation.

Beckett, meanwhile, was elevated by the faith and the people alike.  In 1174 he was canonised due to miracles alleged to have happened at his tomb in Canterbury, which became a major pilgrimage site.  While Henry was demonised for a crime he never explicitly ordered, Beckett became a martyr and revered figure in English Catholicism.  While this may have been an unjust result for Henry, it should serve as a lesson to those in power that your words have consequences beyond what you intend, and you can still be liable for the harm done to others.