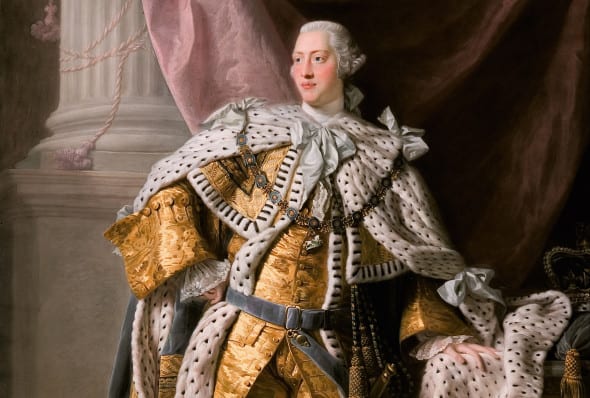 George III’s life and reign were long, 81 years and 59 years respectively, but difficult, marked by a series of military conflicts all over the world and personal mental health crises that left him unable to rule in his later years. Not only King of Great Britain and Ireland, George III was Elector, and later King, of Hanover. His first public utterance is said to have been ‘Born and educated in this country, I glory in the name of Briton.’ His autocratic, imperialist approach to rule, both within Great Britain and the British colonies in North America, India and Africa had the unfavourable effect of revolutionising his subjects. During George’s reign the war against revolutionary and Napoleonic France was won but many of Great Britain’s American colonies were lost during the American Revolutionary War.

The Life of King George III

George was born a small and sickly child two months premature at Norfolk House in London. Son of Frederick, Prince of Wales and Augusta of Saxe-Gotha, George was grandchild of King George II. When the Prince of Wales died unexpectedly in 1751, George became heir apparent to the throne of Great Britain and Ireland and acquired the title of Prince of Wales. George’s education is said to have been incredibly strict and thorough. Raised to be moral, according to the Anglican principles on which he was educated, self-disciplined and proud he had the best education of any English monarch to date and studied the sciences, mathematics, Latin, history, French, geography, law and agriculture.

George was unmarried when he took the throne, aged 22, following George II’s sudden death on 25th October 1760. A king must have a wife and less than a year later George was wed to Princess Carlotte of Mecklenburg-Strelitz in the Chapel Royal at St James’ Palace. King and Queen were crowned two weeks later at Westminster Abbey. Uncommon in royal matches, George and Charlotte had a long and happy marriage that lasted until George’s death and resulted in fifteen children. He and Charlotte spent the majority of their lives in southern England, staying intermittently at other royal residences Buckingham House, Kew Castle, Windsor Castle and St James’ Palace.

As King of Great Britain, George’s main concern was the moral health of his subjects. On taking the throne he immediately instituted a regular prayer meeting for his council and began campaigning throughout his kingdom against vice, profaneness and immorality. The ruling nobility in England at the time was the Whig oligarchy, a political party that opposed the absolute rule of the monarchy, were against Catholicism in Great Britain and were involved in early revolutionary activism in North American colonies. George wanted to smash the Whig’s power and attain full person power throughout his kingdom and colonies but found his match in John Wilkes, a gifted politician and propagandist who became his sworn enemy.

Wilkes challenged the King at every turn, spreading anti-monarchy propaganda, the English lower classes to fight for personal liberty and enjoying the support of prominent Whig aristocrats. George responded by having Wilkes arrested, imprisoned and persecuted using a warrant that was later declared illegal. Wilkes detainment, as is so often the case, only succeeded in making him a martyr for the cause and boosted his popularity and following.

George III’s Stamp Act of 1765, an act that imposed a direct tax on printed materials in the colonies, led to a huge uprising against the King in North America. Specifically, the act required that printed materials in the colonies, such as legal documents, magazines, newspapers etc, be produced on embossed and stamped paper produced in London. It was hoped this act would generate revenue for British troops stationed in North America but Americans protested against the principle of being taxed without representation in parliament and argued that American armies were able to protect themselves against Native Americans and had no foreign enemies to speak of.

George reacted by increasing his personal power on home soil, bribing servants and ministers for their loyalty and taking an increasingly hard line against American liberty. His aim was to achieve absolute power over his subjects and he almost succeeded for a short time. George brought in four punitive Acts of Parliament against Massachusetts and Boston which incited the armed resistance of the Boston Tea Party and led to the Revolutionary War.Still George would make to concessions. He allowed no man to become a minister until he had signed the following declaration ‘that he is resolved to keep the empire entire, and that no troops shall consequently be withdrawn from America, nor independence ever allowed.’

In the year 1770 Lord North became Prime Minister and supported George’s stand on American liberty. In 1773, Lord North passed an act, with George’s backing, taxing tea in the colonies. Tea ships moored in Boston Harbour were stormed by revolutionary colonists and boxes of tea thrown overboard in an event now known as the Boston Tea Party.

The American Revolution began on 19th April 1775. The Americans drew up the Declaration of Independence, making legal American civilians’s right to freedom and civil liberty. In 1778 America was joined by France, then Spain and the Dutch Republic while Britain had no major allies to speak of. Refusing to back down on his staunch opposition to personal and colonial liberty, George faced military defeat and prolonged the war using blockades and starvation tactics. Reluctant to come to terms with the defeat of the British army he drafted an abdication speech but in the end he signed the Treaty of Paris, recognising the United States of America.

Following American Independence, George III enjoyed a short period of popularity in Great Britain. His appointment of William Pitt as Prime Minister was popular and the British public admired George’s religious virtue and dedication to his wife and large family. But around 1788 George’s health began to seriously deteriorate. Now it is thought that the King may have been suffering from a rare blood disorder called porphyria but at the time he was simply described as ‘mad’. George recovered from this bout of illness although he relapsed at various times during the rest of his reign.

In 1789, the French Revolution took place. The French monarchy was overthrown and Napoleon Bonaparte took on the title of the First Consul of the French Republic. In order to strengthen Britain in the event of a French Invasion George passed the Act of Union that united Great Britain and Ireland into the United Kingdom. Although the peace Treaty of Amiens was signed in 1802, war resumed in 1803 with an invasion on English soil a real possibility until Admiral Lord Nelson defeated Napoleon’s navy at the Battle of Trafalgar, thwarting any attempt at invasion.

Following the death of his youngest and favourite daughter, Amelia, aged just 27, George became seriously ill. He never recovered from the stress on his mental health and accepted the need for the Regency Act of 1811 which allowed his son, the Prince of Wales to act as regent for the remainder of George’s life. George lived in seclusion at Windsor Castle, deaf, blind and suffering from dementia until he died on the 29th January 1820. The throne passed to his son George IV then on to William IV before passing to Queen Victoria, the last monarch of the House of Hanover.

George III was seen as a tyrant by the colonists who suffered under his fight to maintain absolute rule over North America. It was said of King George that he ‘hates most cordially every American because he thinks that they have an attachment to their Liberty.’ The tyranny of George’s rule has been cemented in time in the United States Declaration of Independence that noted George’s ‘tyranny’ over the colonies. Other are more sympathetic towards George’s war with the American colonists suggesting George was seeking only to defend the rights of parliament.

George’s long reign lasted 59 years and he lived to be 81 years old. Dubbed Farmer George by commentators of the day, George took great interest in English agriculture and the rural workforce. George was also a scholar in science and industry; he funded William Herschel’s 40 foot telescope and when Herchel first discovered the planet Uranus in 1781, he named it Georgium Sidus or George’s Star.