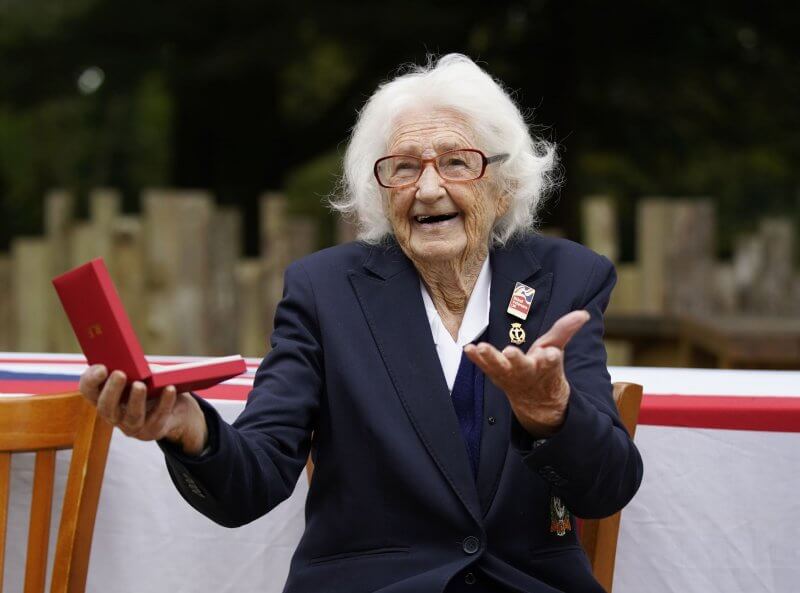 One of the last surviving Bletchley Park Second World War Wren codebreakers has been presented with France’s highest honor.

Lorna Cockayne was given the Legion d’honneur by the highest ranking female officer in the Royal Navy, Commodore Judith “Jude” Terry, at a presentation ceremony held in Ferndown, Dorset.

The 96-year-old from Mudeford, Christchurch, was trained to use the Colossus computers – the first computers in the world – at Bletchley Park to crack German codes after joining the Women’s Royal Navy Service (Wrens) in 1943.

She told the PA news agency: “I am overwhelmed with all these people and the whole day is amazing.

Mrs. Cockayne said that because of security, she was not informed of how important her role had been.

She said: “Nobody told us, except that we were trying to get the messages through – no, we didn’t know what we were doing, but that was security; if you don’t know, you can’t tell anybody.”

Describing how she feels about her time there, she said: “Amazing – I am still learning more about the Bletchley Park because it was a huge, great organization.”

On the 70th anniversary of D-Day in June 2014, the French president announced that the Legion d’honneur would be awarded to all British veterans who fought for the liberation of France during the Second World War.

Commodore Terry, who will be promoted to rear admiral in August 2022, becoming the first woman to hold flag rank in the Royal Navy, said: “I am incredibly grateful to people like Lorna who paved the way for me to join the navy.

“Things have changed slightly since the 1940s. However, the reality of working as part of a team has stayed the same, and without people like Lorna, I wouldn’t be able to stand here today.”

She told Mrs. Cockayne: “The fact you were able to crack the code that helped us win the war blows my mind, and I am delighted that France has recognized you with the Legion d’honneur.”

Steve Cockayne, the youngest of Mrs. Cockayne’s three children, said: “I feel immensely proud – she is very humble about all of this and really didn’t want a big show, but I persuaded her to accept the medal on behalf of all the Wrens who can’t be here because they all did tremendous work at Bletchley Park.”

The ceremony was organized by the Christchurch Branch of the Royal Naval Association (RNA).

An RNA spokeswoman said: “Lorna Cockayne is one of the last surviving people who ran the first computers in the world – the Colossus computers at Bletchley Park.

“At the time, women could join the Women’s Royal Navy Service (Wrens) but not the Royal Navy itself, offering administrative support to the War effort but not allowed to sea.

“Lorna joined the Wrens in 1943, and as a member of Bletchley Park’s ‘C Watch’ she played a pivotal role in defeating the Germans.”

British codebreakers helped decipher the German army’s Lorenz encrypted messages using the Colossus computer and Tunny machine at the Government Code and Cypher School’s main codebreaking center, which was based at Bletchley Park.