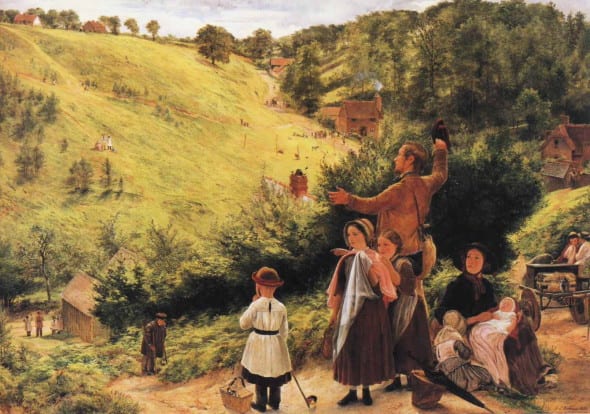 As a result of the industrial revolution, there was widespread unemployment in Britain during the 1830s and 1840s, resulting in mass emigration to the British colonies and the United States. A major incentive for the emigrants was the discovery of gold in Australia and North America; a fact referred to in these lines from Oliver Goldsmith’s The Traveller (1764), which accompanied the picture when it was first exhibited at the Royal Academy in 1859:

Have we not seen, round Britain’s people shore,
Her useful sons exchanged for useless ore?
Forced from their homes, a melancholy train,
To traverse climes beyond the western main.

Redgrave’s choice of verse was severely criticized by the Illustrated London News, which complained that ‘the time is gone by for such maudlin stuff as this, and artists, if they would minister to the requirements of the age in “Britain’s peopled shore”, and in new homes “beyond the Western main” would do wisely to adopt a more ennobling view of a great social and political movement’ (quoted in Lambourne, p.359).

Redgrave was a pioneer of social realist subjects, but he later turned to landscape and frequently painted in the open air. In this work the focus is less on the unhappy family of emigrants than on the idyllic countryside they are so loath to leave. The setting is Leith Hill, near Abinger in Surrey, where Redgrave owned a cottage and spent the summer months of each year. The understated drama of the family’s departure is described in bright colours and careful detail, a new development in Redgrave’s art, perhaps reflecting the influence of Pre-Raphaelite art. On the opposite hill the inhabitants of the village have come out to wish them well. The father, with his carpenter’s bag, ‘a modern Joseph escaping with his family to a new land and life’ (Casteras and Parkinson, p.138), waves his hat in an enthusiastic gesture of farewell. Underlying the family’s sadness at departure is a sense of optimism, reflected in the sun-drenched countryside. Halfway down the hill a crippled boy stands forlorn, unable to accompany them on their adventure.