You are here: Home / Anglophilia / British Slang / A Brit Back Home: There is nothing like British Place Names!

Every so often something lovely pops up on my Facebook feed, and last week it was a map of Great Britain. Not just any old map, but a map highlighting the silly and often rude names we have for places here. Anglotopia has already made an impressive start at listing all the weird and wonderful place names in the UK here.

The maps are produced by a company called Marvellous Maps, or should I say  – Strumpshaw, TIncleton & Giggleswick’s Marvellous Maps, there are maps to do with British food & drink, British Literature, and so on. The one that caught my eye, however, was the map with lots of “Bottoms” and other unusual place names. 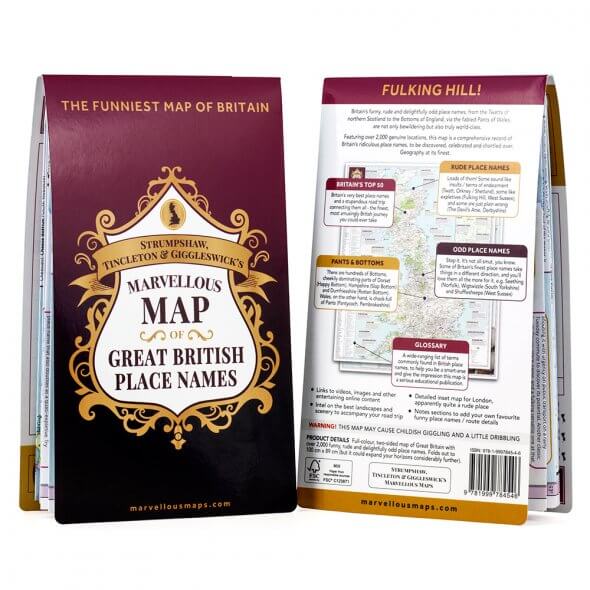 It’s true – we have an awful lot of places with Bottom in the name, (over a hundred, in fact) and yes, it does cause the occasional giggle even after all this time. There are lots of Bottoms in Dorset it appears – Happy Bottom, Scratchy Bottom and Shepherd’s Bottom to name a few. We have Slap Bottom in Hampshire, as well as Rotten Bottom in Dumfriesshire. There’s even a house called Windy Bottom according to this web site. I mean really, who’d call their house Windy Bottom?

Speaking of… there was a survey in 2012 to find the most unfortunate place name in the UK, and it was a tight race. In the end, Scratchy Bottom beat out Broken Wind but came a close second to the winner – Shitterton. Once again, it’s in Dorset. What on earth were the people of Dorset drinking when they came up with their place names? I know that cider’s strong, but really. 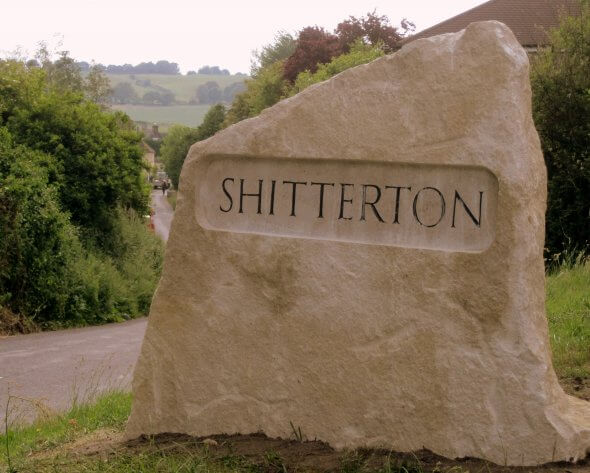 To be fair to them, apparently, Shitterton is the literal English translation of the village name, recorded in Norman French in the 11th century Domesday Book as Scatera or Scetra which means a little town that is on the stream of a midden or sewer. So yes, although it’s no longer an accurate description of the place now, you can’t argue with the origin. Shitterton fell out of the top ten in 2016 when the winners’ names took a turn for the even more rude! (Let’s just say the winner was Bell End, and leave it at that.)

There are also quite a few places with Butt in the name; indeed I recall a friend once living in a house called The Butts. Until recently, “butt” wasn’t used to mean the derriere so it wasn’t as hilarious as it could have been. “Butts” is an archery term, and according to Wiki

“is an archery shooting field, with mounds of earth used for the targets. The name originally referred to the targets themselves, but over time came to mean the platforms that held the targets as well. “

You’ll find The Butts in Middlesex and Hampshire    and there are over 140 roads and streets with Butt in the name too.

And of course, not to be outdone, there’s a street which just piles on with the sillies – Butts Wynd, in St. Andrews. Given that “wynd” is an old word for a narrow street or alley, it was obviously a very innocent name at one point in time. We also have one called Crumps Butts in the Oxfordshire town of Bicester, and I have no idea what that refers to.

Fun fact #1 – In the same way that Leicester truncates itself to Lester in pronunciation, Bicester, is pronounced Bister.

Fun fact #2 – Crump is a real word! According to the Merriam-Webster dictionary, it’s a verb meaning “to crunch” or “to explode heavily”; it’s also a noun meaning “a crunching sound” or a “shell or bomb”. Goodness knows what was going on in Crumps Butt but it sounds alarming.

So back to Marvellous Maps for a moment. I popped over to their web site, and apart from a lovely array of maps and mugs, they’re offering a generous 20% off map orders of two or more. What are you waiting for?

(Disclaimer – I received nothing in return for this post other than the inspiration to dive into the subject.)