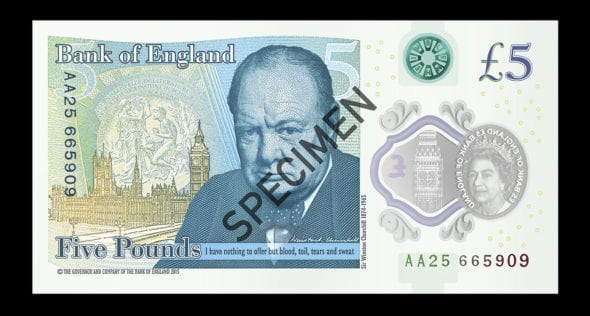 It’s been a long time coming but the Bank of England has finally unveiled their new £5 note. The big changes are the addition of Winston Churchill to the front and the note is now made of a new plastic material.

From the Bank of England:

Today, Bank of England Governor Mark Carney unveiled the design of the new £5 note, which will be issued on 13 September 2016. The New Fiver is the first Bank of England note to be printed on polymer, a thin flexible plastic, and will feature Sir Winston Churchill.

The New Fiver is cleaner, safer and stronger than paper notes. The introduction of polymer banknotes allows for a new generation of security features which make it even harder to counterfeit. The note is also resistant to dirt and moisture and so remains in much better condition for longer. The strength of the polymer material means that The New Fiver is expected to last at least 2.5 times longer – around 5 years – even after being folded into wallets and scrunched up in pockets.

“The New Fiver will commemorate the achievements of the only Prime Minister to win the Nobel Prize for literature and one of the greatest statesmen of all time – Sir Winston Churchill. As he himself said, ‘a nation that forgets its past has no future’. Our banknotes are repositories of the United Kingdom’s collective memory and like Churchill, our new polymer notes will stand the test of time. The New Fiver, the first of the Bank’s polymer notes, is cleaner, safer and stronger. It incorporates advanced security features making the notes even harder to counterfeit. The polymer is also harder wearing, as well as resistant to dirt and moisture, so we expect it to last for at least 2.5 times longer.” 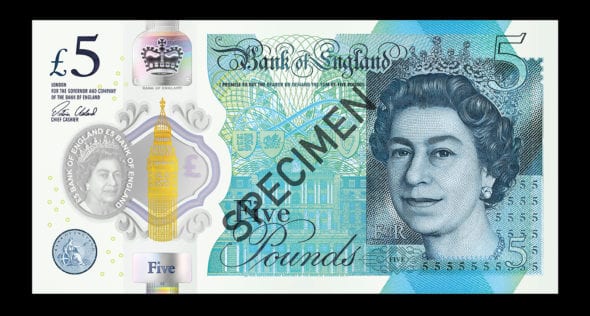 I’m quite excited to see this new note – it’s long overdue for Churchill to be recognized on Britain’s currency.