You are here: Home / Reviews / Attraction Reviews / The Majestic Cutty Sark Re-opens After Renovation – Review and Details Inside 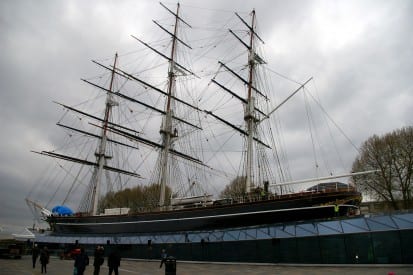 Editor’s Note: The Cutty Sark has recently re-opened in London after a massive renovation and our London correspondent Laura Porter had the chance to see behind the scenes before it opened to the public. Thanks Laura!

What’s so special about the Cutty Sark?

The Cutty Sark is the last surviving tea clipper. What was a tea clipper? A 19th century sailing ship that was incredibly fast and brought tea, opium, spices and other goods from the Far East to Europe. The 143 year old vessel has been painstakingly conserved and pieced back together at its home in Greenwich, south-east London. 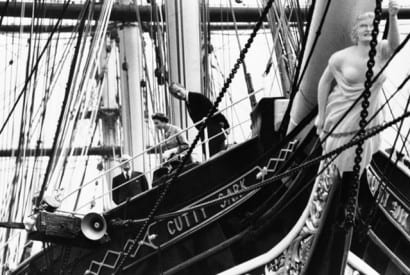 After a conservation project lasting six years and costing £50 million the Queen and HRH Duke of Edinburgh are reopening the Cutty Sark on 25 April 2012 and it is open to the public again from 26 April 2012. It’s a déjà vu moment for The Queen, as she also opened the Cutty Sark to the public the first time back in 1957.

HRH Duke of Edinburgh has been president of the Cutty Sark Society since 1951 and Queen Elizabeth II is celebrating her Diamond Jubilee in 2012. On 3 February 2012, The Royal Borough of Greenwich was its granted royal status and this is the first visit from the Queen and HRH Duke of Edinburgh since bestowing the honour.

The Heritage Lottery Fund provided £25 million and an additional £25 million of public money was raised through the National Lottery. Banking group, HSBC are now the primary sponsor of Cutty Sark. They were founded in Asia to finance trade with the West five years before Cutty Sark first set sail in 1870.

1869 – Cutty Sark was launched at Dumbarton on the River Clyde, Scotland.

1869 – (Suez Canal opened. The route could be used by her coal-powered rivals but was not navigable by sailing ships that had to take the longer route around the Horn of Africa.)

1870 – Her first voyage from London to Shanghai.

1878-82 – Various cargoes to and from London, India, Japan, Singapore and the Philippines.

1883-95 – Used in the wool trade with Australia, bringing the new season’s clip from Sydney to London, setting new speed records year after year.

1895 – Sold to the Portuguese as the Ferreira, although her crews called her Pequina Camisola (‘little shirt’). She was worked between Oporto, Rio and Lisbon.

1922 – Sold to another Portuguese company and became the Maria do Amparo.

1922 – Refitted in Surrey Docks, London. While sheltering in Falmouth Harbour from a storm she was seen by Captain Wilfred Dowman who bought her, returning her to British ownership again.

1938 – Captain Dowman’s widow presented the ship to the Thames Nautical Training College at Greenhithe on the Thames, to be used as a training vessel.

1951 – Cutty Sark was moored in London in the Thames for the Festival of Britain celebrations. The Cutty Sark Society was formed with HRH The Duke of Edinburgh as patron.

1954 – The ship came to her present berth in a specially constructed dry dock in Greenwich as a memorial to the great days of sail.

1957 – The Cutty Sark was opened to the public by Queen Elizabeth II.

2006 – Closed to the public for a major conservation project.

2012 – The Cutty Sark was reopened to visitors by Queen Elizabeth II.

What’s in a Name?

Tam O’Shanter is a poem by Robert Burns that depicts Ayr in Scotland in the late 18th century. Tam meets a group of witches as he rides drunkenly home. One stands out – Nannie – as she is young and beautiful. Nannie is wearing only a “cutty sark” – a short linen shift or shirt. The ship’s figurehead is a representation of the witch Nannie Dee and is on display with a collection of over 80 others, all from merchant ships that were lost at sea. Nannie is holding a long, grey horsehair tail.

A Visit Today to the Renovated Ship 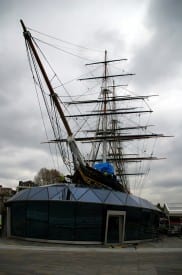 This preserved three-masted sailing ship has been raised 11 feet (3.3m) onto new steel supports so, for the first time, Cutty Sark can be seen from below, in a new glass-roofed visitor centre that has been built beneath the ship in the dry dock. This means visitors can now walk right underneath the elevated ship to see her unique shape and the elegant lines of her hull, although some think this is ‘undignified’.

Despite the fire in 2007 during the conservation project, nearly 90% of the fabric and fittings on the ship are from the original vessel. Any additional material that has been added in to strengthen the ship has been painted a different colour.

There are glass lifts now making this an accessible attraction but some have commented that they don’t like the glass pod on the open main deck that accommodates a staircase as it detracts from the lines of the vessel. 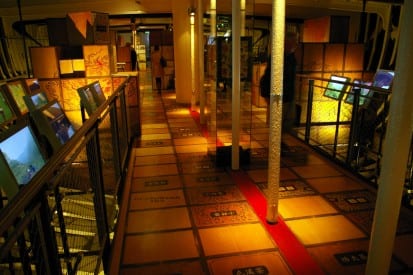 You enter at ground level and first go into the Lower Hold where you can discover how tea chests were loaded and tea chests have been used for the flooring. There’s a film to learn more about the ship’s structure in the Michael Edwards Studio Theatre.

Up the stairs gets you to Level 1, the ‘Tween Deck where there’s an interactive game to try to steer the ship from Australia to England. You move a steering wheel and watch your progress on a screen. You’ll need to consider the trade winds to be successful so there’s some learning to be had here.

Up again and at Level 2 you’re on the Main Deck and open to the elements. Here you can try to steer the Cutty Sark – or at least get some fun photo opportunities – plus you can see inside some of the small rooms used by the crew for sleeping, cooking and eating. The bunks shock everyone as they are incredibly short so we can be sure sailors were much shorter than us today. 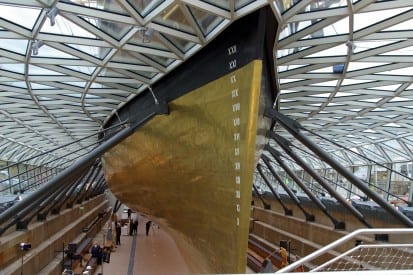 To continue your tour you need to negotiate the narrow staircases back to the ground floor, come out of the side of the ship and walk around to the steps down to the Sammy Ofer Gallery which is the lower ground level. This is the ‘wow factor’ and I expect many visitors will stand in awe on these steps as it’s an amazing sight: the bright golden ship’s hull and the glass roof over are stunning. You can walk underneath the full length of the ship and can get another great photo opportunity: pretending to hold it up!

At the far end is the collection of ship figureheads and some audio exhibits, and at the other end are the cafe and toilets. Along one side you can see the longest plank of rock elm that was part of the ship and has been left unpreserved to show visitors the extent of the conservation that was needed; it even shows the fire damage from 2007.

Twinings started in 1706 and soon opened the world’s first dry tea and coffee shop on The Strand in London. In her heyday, Cutty Sark carried enough China tea to make more than 200 million cups. There is little doubt that the many chests of tea carried by the Cutty Sark were bought by Twinings, to be included in the China tea blends, and for visitors today they have created a Cutty Sark-inspired tea.

Family activities start in June 2012 with family fun weekends on the first weekend of the month and more in the school holidays.

Photo Gallery of the New Display

Key Info about the Cutty Sark

Bundled tickets will be available with the other Royal Museums Greenwich (RMG) attractions.

Cutty Sark DLR, and Maze Hill and Greenwich train stations. The closest tube stations are North Greenwich (to change to local buses) and Canary Wharf (to change to DLR), both on the Jubilee line.