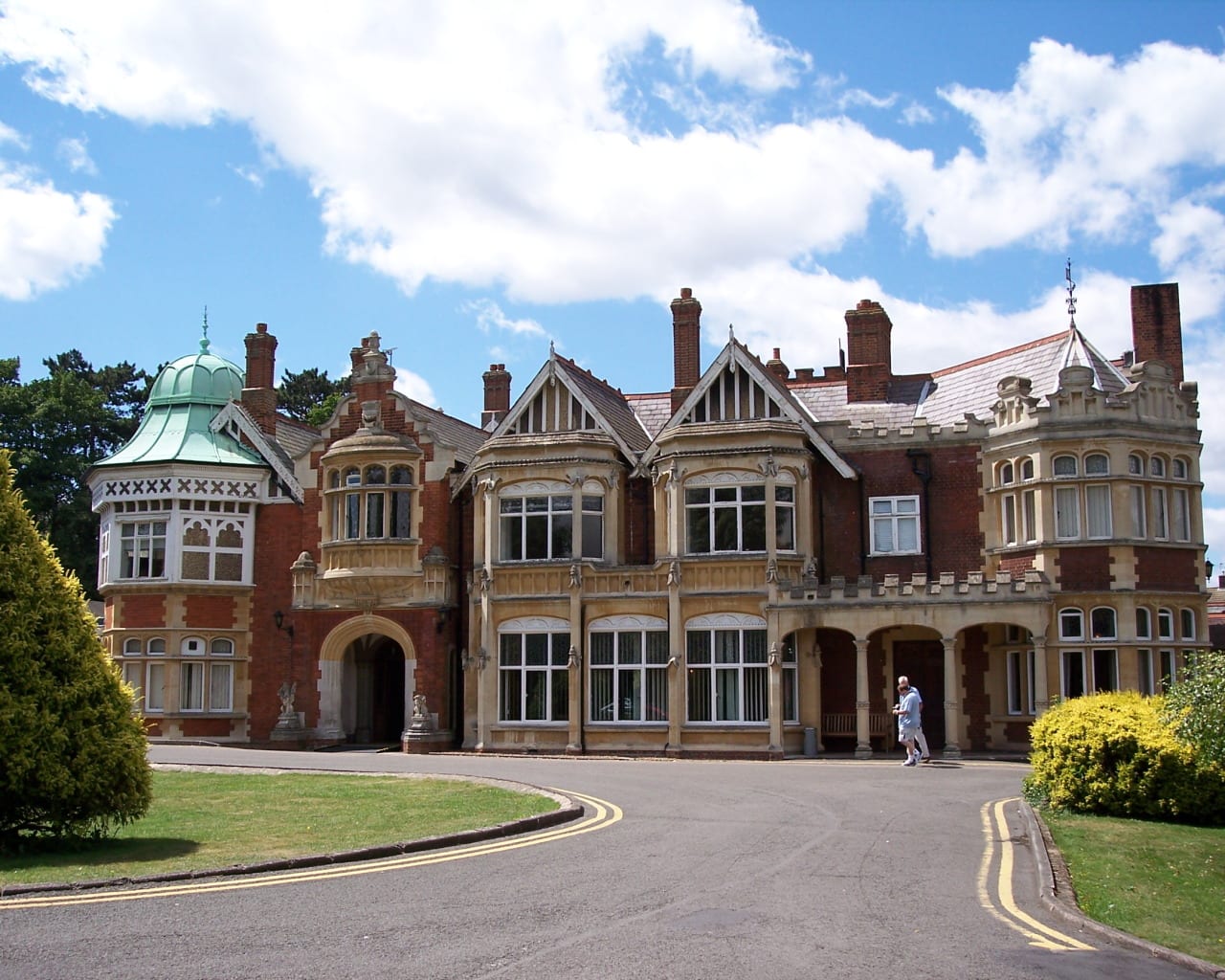 Bletchley Park is the home of British codebreaking and a birthplace of modern information technology. It played a major role in World War Two, producing secret intelligence which had a direct and profound influence on the outcome of the conflict.

Due to its exceptional historical importance, this nineteenth-century mansion and estate in Buckinghamshire is open to visitors throughout the year. It is an accredited museum dedicated to telling the story of Bletchley Park, its achievements and the people who worked there during World War Two.

You can reach Bletchley Park by train from London in under an hour, and it’s a fantastic day out. I’ll be writing a more in-depth look at BP for the summer issue of Anglotopia magazine which gives you time to subscribe.

D-Day is the day in the Second World War (6 June 1944) when Allied forces invaded northern France by means of beach landings in Normandy. The invasion marked the beginning of the final phase of World War II in Europe, which ended with the surrender of Germany the following May.

Previewing at Bletchley Park from 11 April 2019 (and fully open by May 2019), D-Day: Interception, Intelligence, Invasion is an immersive cinematic experience. Timed to coincide with the 75th anniversary of D-Day, this specially-commissioned film is projected on a 22m screen in the newly restored Teleprinter Building. This was where hundreds of thousands of intercepted messages first arrived at Bletchley Park from secret listening posts across the UK, and Ultra intelligence was transmitted to Allied headquarters.

BT (formerly British Telecom and General Post Office before that) is the corporate partner connected to the restoration of Teleprinter Building and this new exhibition. It was General Post Office engineers who managed Bletchley Park’s secure communications network and delivered innovative information technology such as Colossus, the world’s first electronic digital computer.

No single operation of World War Two was so dependent on Bletchley Park as the Normandy landings. Seventy-five years on, D-Day: Interception, Intelligence, Invasion is revealing the full scale of Bletchley Park’s top-secret impact on the planning and implementation of D-Day.

This recently restored building was constructed in 1941 in brick with a steel frame and no windows to provide blast-proof protection for the teleprinter equipment and their operators.

Teleprinters were used by Bletchley Park both to receive intercepted Enigma messages for decoding and to distribute information from the decoded messages to Allied command centers across the world.

After the war, the General Post Office used the site as a residential regional training center for clerical, engineering and telecommunications work. The Teleprinter Building was used as a cinema and for training and entertainment. It was substantially rebuilt in 1957 (the higher level and windows added) as an assembly hall for Bletchley Teacher Training College. 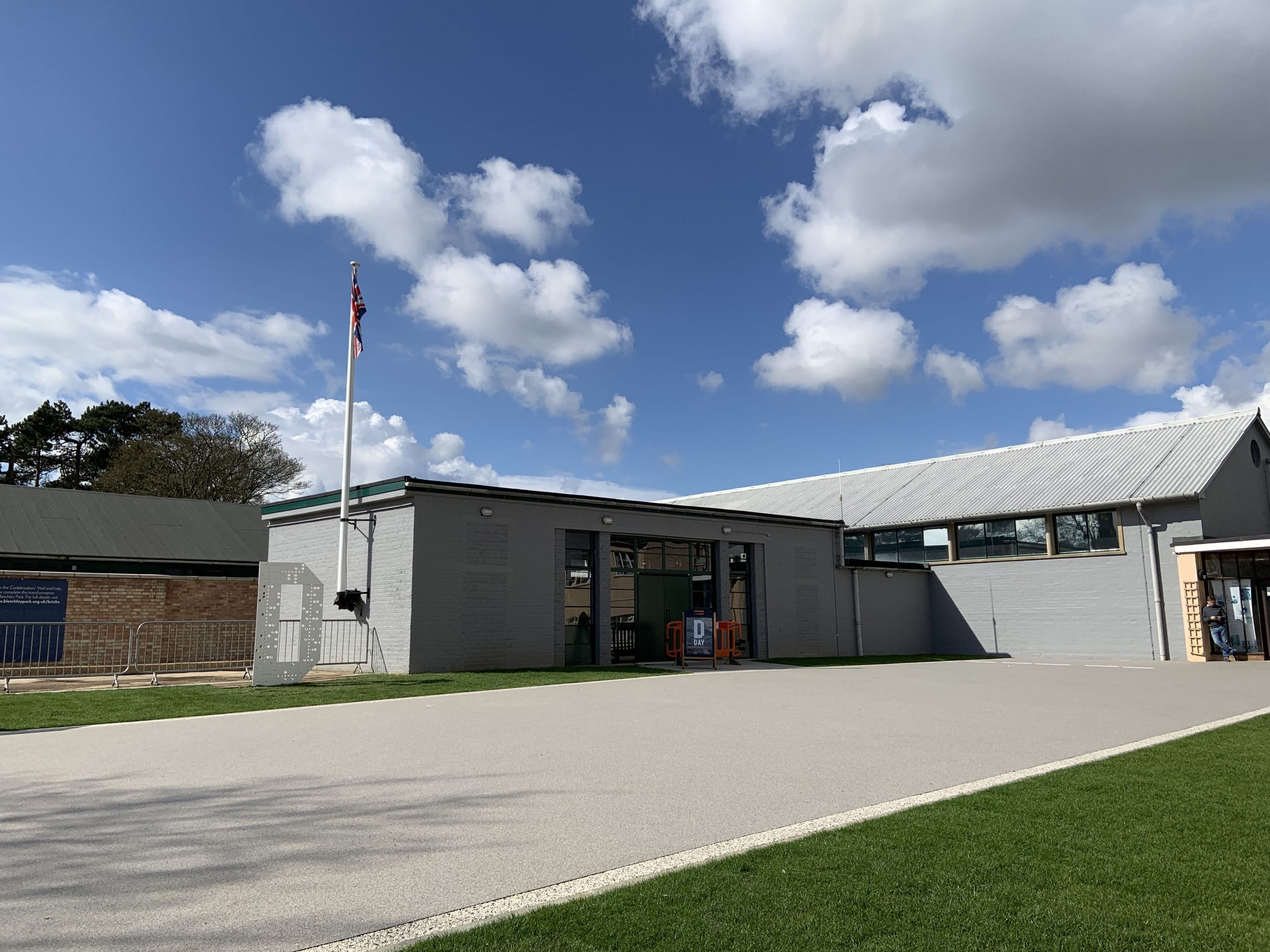 When you enter the building, you first see the new exhibition. It has spotlights on key people and clearly-presented information on how their skills were used at Bletchley Park. The colored lines show how information was brought together from many sources.

The exhibition includes direct examples of when Bletchley Park intelligence altered the Allies invasion plans and helped to save lives.

The D-Day landings were the largest amphibious operation in history. The intelligence plan leading up to 6 June 1944 took two years to prepare. Even on the day, coded messages were still being decrypted, translated and sent on as intelligence reports in under three hours. This gave the Allied Commanders invaluable insights into how the Germans were responding to the invasion.

While visiting Bletchley Park, you start to understand the size of the operation here. The exhibition explains that by 1944 BP, and its Outstations, had grown from an organization employing around 100 people in 1939 to an intelligence factory employing over 9,000 men and women working on three eight-hour shifts to keep the Park running all day and all night. As you might expect for home front work, women outnumbered men at Bletchley Park around three to one.

Huts were paired with Codebreakers and Translators working separately and never entering the other’s building. This was as much for security as for the production line process that needed certain workers at each stage.

I read about the existence of the top-secret Western Front Committee at Bletchley Park, formed in October 1942, who week by week patiently accrued intelligence on the German defenses in France which directly impacted on the invasion plans. Their remit was to intercept, decipher, analyze and organize the intelligence necessary to make the storming of ‘Fortress Europe’ a success.

And while many of us have heard about the importance of the Codebreakers’ breakthroughs with the Enigma machine, there were more machines that they had to crack. The Lorenz machine coded the top level German messages (Hitler’s own correspondence and those working most closely with him). This brought the need to build machinery to help decipher Lorenz messages that led to the development of Colossus, the world’s first large scale electronic digital computer. Details of the Lorenz machine – and Bletchley Park’s role in breaking it – were only completely declassified in 2002.

There were Japanese ciphers too, and along with the Lorenz messages this gave the Allies a unique insight into Hitler’s strategy for dealing with the ‘Second Front’. It was a fortunate interception of the Japanese reports on meetings with Hitler that brought the coded messages to Bletchley Park. And, the skills of the people working here that meant that intelligence could be understood and used.

The 12 minute film is based on recently declassified information. It has direct examples of how intelligence produced at Bletchley Park helped troops on the ground.

The huge 22-meter curved screen has sections, so there are multiple images telling a story at the same time. There is an English narration and on-screen text too.

While war is brutal and shocking, the film doesn’t glorify the grotesque side of battle.

The film explains about ‘Fortress Europe’ being Hitler’s huge chain of coastal defenses designed to keep the Allies out of Western Europe.

And you learn about the Enigma machine used by the German military to scramble messages into unintelligible cipher text. There was always a quick deadline as the machine’s settings were changed every 24 hours.

Decyphering these messages wasn’t where things ended. As I noted above, it took two years of information gathering leading up to D-Day. Fake news played its part as the Germans were fed a diet of deception and time was needed to assess if the misinformation was believed.

During each passing month leading up to June 1944, the intelligence gathered by the Codebreakers painted a picture of an increasingly formidable enemy.

On the day, none of the troops who gathered for their pre-invasion briefings knew anything about Bletchley Park. Yet the knowledge BP offered allowed them to know where the enemy was, the weapons and the numbers to expect.

The beaches to the west, Utah and Omaha, were assigned to the US 4th Infantry, 29th Infantry and 1st Infantry Divisions. This was almost 60,000 men between them and they were scheduled to begin their assault at 6.30am. Almost 25,000 men of the British 50th Division were to land at Gold beach at 7.25am. Juno was to see an assault by the 21,500 men of the Canadian 3rd Division at 7.45am. And also at 7.25am, Sword would come under attack by the British 3rd Division, numbering close to 30,000 men.

On 6 June 1944, at 00.07 hours, six Horsa gliders crossed the Normandy coastline at an altitude of close to 2,135 meters (7,000ft). Detaching themselves from the Halifax bombers that had towed them across the Channel, they began a stealthy descent.

At 00.16 hours the 181 men of D Company, Oxfordshire and Buckinghamshire Light Infantry hit the ground. One glider was blown off course but the other five landed close to the two bridges the men were responsible for taking. Ten minutes later bridges Pegasus and Horsa were in Britsh hands.

The success of this first engagement with the enemy on D-Day rested on a combination of intelligence, planning, training, skill, bravery, good fortune and surprise.

Operation Fortitude – the deception campaign partly enabled by the Codebreakers – had achieved its goal. Convinced that the invasion would strike in the Pas de Calais, the Germans had not committed sufficient troops to Normandy to prevent the Allied forces from forcing a bridgehead.

But the intelligence provided to the invading troops was not infallible. There were some gaps in Allied knowledge. By far the worst of the fighting was endured by the US 1st Infantry on Omaha beach. They suffered a loss of 2,499 men. The total Allied casualties on D-Day were around 10,000 with over 4,000 killed.

The campaign for the soldiers, sailors and airmen on D-Day began with 130 staff at Bletchley Park in August 1939 facing the seemingly impenetrable wall of Germany’s military communications encryption.

2019 also sees the opening of a new display of items from the museum’s archive, showcasing rarely seen cartoons and sketches of people and places associated with Bletchley Park.

The eightieth anniversary of the Women’s Auxiliary Air Force (WAAF) will be marked by a special display opening in summer 2019. Visitors can also enjoy Bletchley Park’s popular vintage 1940s weekends, Museums at Night events, as well as lectures, workshops and activities throughout the year.

Visit Duration: It is recommended to allow 4 to 5 hours for your visit but you could easily spend a full day here. Your ticket becomes an annual pass so you can return for unlimited visits throughout the year.

You will need a map to explore the site as it is spread across many buildings (main mansion and the huts).

There are one-hour guided outdoor walking tours available. There’s no extra cost for these but you can’t book in advance so check times when you arrive and sign-up as there are limited numbers. There is a multimedia guide available too.