You are here: Home / Columns / Laura's London / Laura’s London: Checking out the new Cable Car Over The Thames – The Emirates Air Line Review 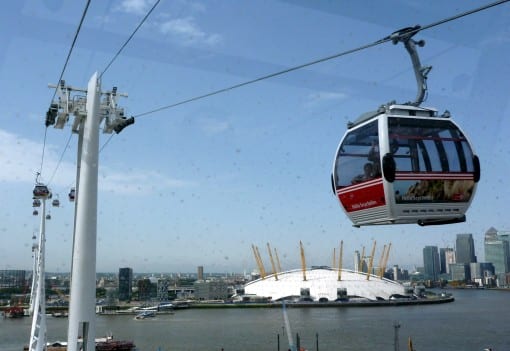 Open from 28 June 2012, (yes, before the London 2012 Olympics!) this is the first cable car in London and the first urban cable car system of its kind in the UK. Its official name is Emirates Air Line because of the Dubai-based airline’s 10 year sponsorship deal at a cost of £36m.

The Emirates Air Line is now on the iconic tube map and this is the first time in the tube map’s 78 year history that a commercial brand has been able to put their name to a transport link and station as a result of a partnership with Transport for London (TfL).

It is hoped the London cable car, I mean the Emirates Air Line, will encourage regeneration at The Royal Docks and Greenwich Peninsula, each a dedicated enterprise zone, with plans for a floating village, SS Robin and Siemens Technology Centre to be opened on the north side of the river. This is part of the Mayor of London’s ambitious plans to revitalize east London. 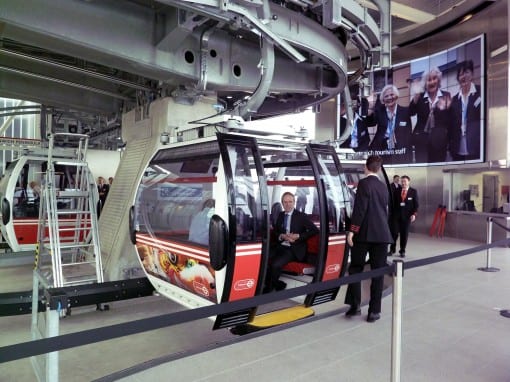 The Emirates Greenwich Peninsula terminal is near the main pedestrian squares and the O2 Arena, and North Greenwich tube station, making it easy for visitors and local people to use.

The Emirates Royal Docks terminal is on the northern side of Victoria Dock, close to Royal Victoria DLR station and a short walk from ExCeL. 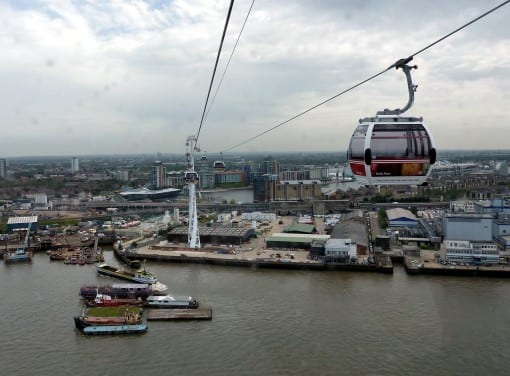 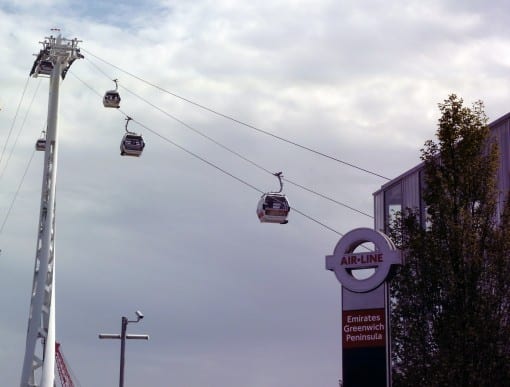 I tried a ‘flight’ on the first day of opening and was amazed at the number of world media who turned up to try it. Londoners are being told it’s public transport yet most of us are struggling to find a reason to get off at Royal Docks so we’re seeing it as a tourist attraction, and it seems that was the general impression from those who were there for a preview.

This isn’t central London so it’s not the same views as at the London Eye and the cable car, I mean Emirates Air Line, has a job: to connect Europe’s biggest entertainment venue and Europe’s biggest conference venue and to help move the high numbers of visitors to both.

Talking of the London Eye, do you remember when it was sponsored by British Airways? Well the cable car has taken the airline theme to a further extreme as trips across the river are called flights, you don’t buy a ticket – you get a boarding pass, and the staff are dressed as flight attendants.

The cable car keeps moving, just like the London Eye, so you have to do fast boarding. There’s a slight bump as the car goes over the mechanism, and don’t stand up as the car will swing – and an audio announcement will tell you off. Other than that it’s a really smooth ride and very peaceful up there. It’s quiet and you can simply admire the views on the short crossing. There’s no air conditioning but there are small ventilation windows at the top of the main windows. Although ten people is the maximum for each car, six or less makes for a much more comfortable ride. 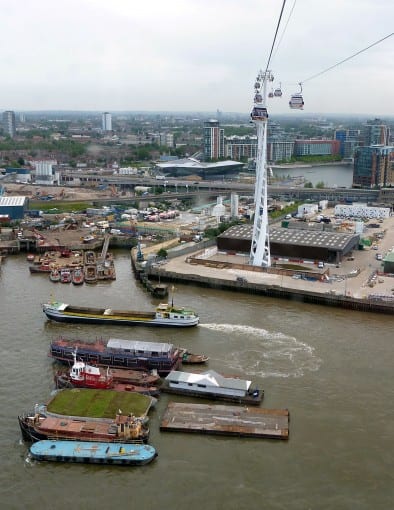 I expect more people will travel from Greenwich to Royal Docks, or actually do a non-stop round trip. On the way to the Royal Docks you get a great view of the Olympic Park on your left and the Thames Barrier and London City Airport on your right. On the way back to Greenwich the view is dominated by The O2 – wave to the people climbing over the top at Up at The O2!, and Canary Wharf behind. Pick up a free inflight map from either terminal and then you should be able to find Historic Royal Greenwich too. With a good zoom you might even get to see The London Eye, The Shard, and the city including St Paul’s Cathedral.

Soon there should be an audio guide available too at app.emiratesairline.co.uk.

The Mayor of London, TfL, Emirates and everybody associated with the project are incredibly pleased to have it operational ahead of the London 2012 Olympics. During the Olympics, the London cable car, I mean Emirates Air Line, will connect two venues as The O2 – known as North Greenwich Arena during the games as O2 is not an Olympic sponsor – will have the basketball and gymnastics, and ExCel will have boxing, fencing, judo, taekwondo, table tennis, weightlifting and wrestling.

This addition to the London skyline should also be a great visitor attraction and bring new people to this southeast area of the city long after the Olympics. 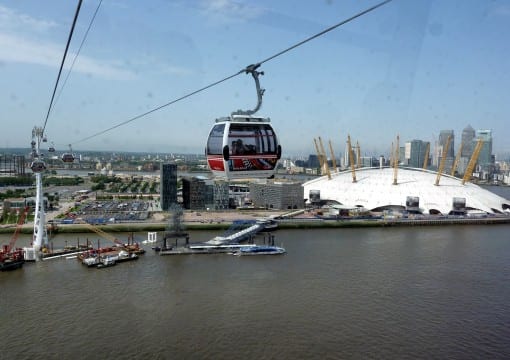 This is the current opening schedule but it may change during the London 2012 Olympic Games and for special events. The hours will be extended when major events are at The O2 or ExCel. 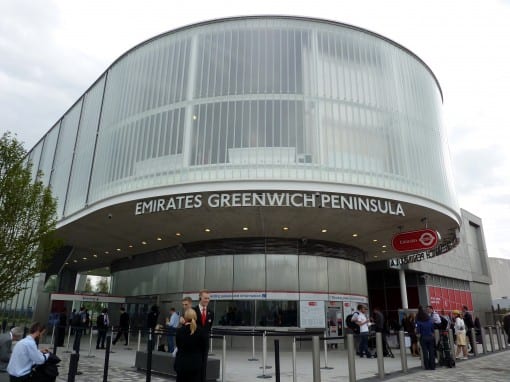 As with all London transport – remember this isn’t technically a tourist attraction – cash fares cost more so it’s always better to have an Oyster card.

Passengers are able to make a non-stop round trip so getting on may be hindered by non-exiting passengers.

The London cable car, I mean Emirates Air Line, is not included in a daily, weekly, or longer travelcard so everyone has to pay an additional fare to travel on it but Oyster card holders with travelcards loaded will receive the 25% discount offered to all Oyster card holders. Oyster Pay As You Go card holders can simply pre-load their card with credit or add it at the ticket office. There are ticket offices and vending machines for tickets at both terminals.

As with other London transport, you don’t have to book in advance (you can’t even if you wanted to) but you simply turn up and join the, hopefully, fast-moving line.