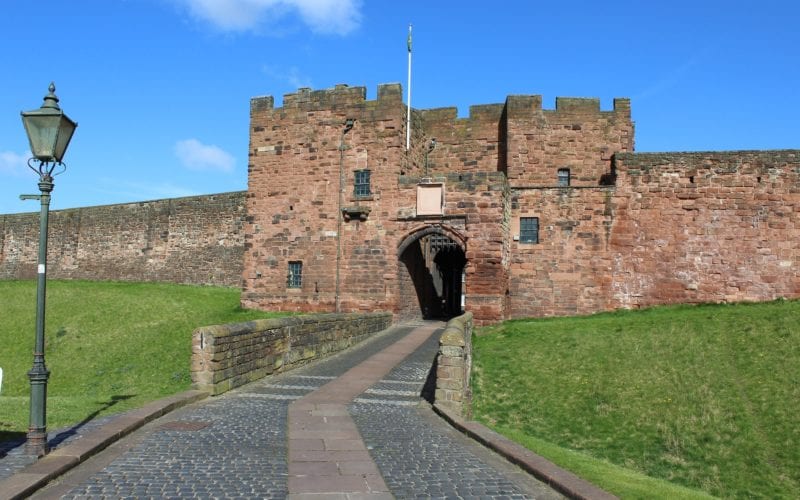 Carlisle is the county town of Cumbria, and its history goes back to before the coming of the Romans.  In fact, Carlisle was one of the largest towns in the area but apparently burned down prior to the Roman invasion.  The Romans then established their own settlement here which became the basis for the town as it exists today.  Romans gave way to Britons and eventually Normans.  Its status as a military town gave way to becoming a textile producer and manufacturer.  While this makes up roughly a quarter of the town’s economy, it still relies heavily on tourism and offers many great places to visit.  We’ve identified ten of our favorite places in Carlisle below, and you can let us know your favorite spots in the comments.

A World in Miniature Museum

This unique museum in Carlisle features one of the largest collection of miniatures in the world (pun intended).  It can be quite amazing the level of detail that the miniatures can present and the museum is full of original pieces as well as replicas of paintings, china, and more.

Walby Farm Park is a way for those of us who never grew up in a rural setting to learn how farms are run.  With exhibits both in and outdoors, Walby Farm Park gives visitors the chance to interact with the animals and learn about their care and contribution to farm life.  There’s also plenty of fun to be had here as well from mini-vehicles to a lovely nature trail.

Carlisle has a long history associated with the military going back to the Romans, and the Museum of Military Life puts hundreds of years of this history on display.  Located in Cumbria Castle that was once home to the Duke of Lancaster’s Regiment which was formed in 1702 and whose artefacts make up most of the museum’s collection.

The Guildhall Museum is one of the oldest buildings in the town, believed to date back to the 14th Century and listed as a Grade I Ancient Monument.  The first floor is home to a restaurant, but the second and third floors of this cantilevered wooden building feature exhibits dedicated to the history of Carlisle and what life has been like here over time.

Carlisle Lake District Airport was once a World War II RAF base, and part of it is dedicated to that history as Solway Aviation Museum.  Like many aviation museums, Solway has a pretty impressive collection of aircraft and exhibits dedicated to the base’s history.  They also have exhibits on advances in technology including the Martin-Baker ejection seat and the Blue Streak medium-range ballistic missile.

Not too far from Carlisle, you’ll find the largest man-made nature reserve in the United Kingdom.  Watchtree Nature Reserve was transformed from a disused airfield into a 200-acre sanctuary for endangered and non-endangered species.  Visitors can take tours to view the animals, walking trails throughout the reserve, and learn more about the many wonderful species that live here.

Tullie House is a Grade I listed Jacobean manor that is home to a museum and art gallery dedicated to the history of Carlisle and the immediate area as well as art and artists that have contributed to the town’s culture.  There are also exhibits on the natural history of Carlisle, making Tullie House one of the most well-rounded museums in the area and the best place to learn about Carlisle.

Carlisle Cathedral began its life as a 12th Century Augustinian priory while the current structure was built between the 13th to 14th Century in a Gothic style.  It used to be bigger until the English Civil War saw the tearing down of the original nave, which now makes it the second-smallest cathedral in the UK behind Oxford Cathedral.  The interior is exceptionally gorgeous from the flowering Gothic tracery to the carved wooden choir stalls.

One of the top tourist draws in the town, Carlisle Castle was built during the reign of King William II on the site of the former Roman fort of Luguvalium.  It was long a defensive bulwark against the Scots in the North, and its tower is one of the most predominant features.  There are also plenty of exhibits on the castle’s history and its former occupants (and prisoners) such as King William II, Bonnie Prince Charlie, and Mary, Queen of Scots.

Well before Carlisle Castle was built to defend against the Scots, Hadrian’s Wall was there to defend Roman settlements against the Picts.  The wall was seventy-three miles long and dotted every five miles with forts such as Birdoswald.  The Hadrian’s Wall Trail will take you past both, though Birdosawald is one of the best places to jump onto the trail as the area around Carlisle is one of the largest intact parts of the wall.