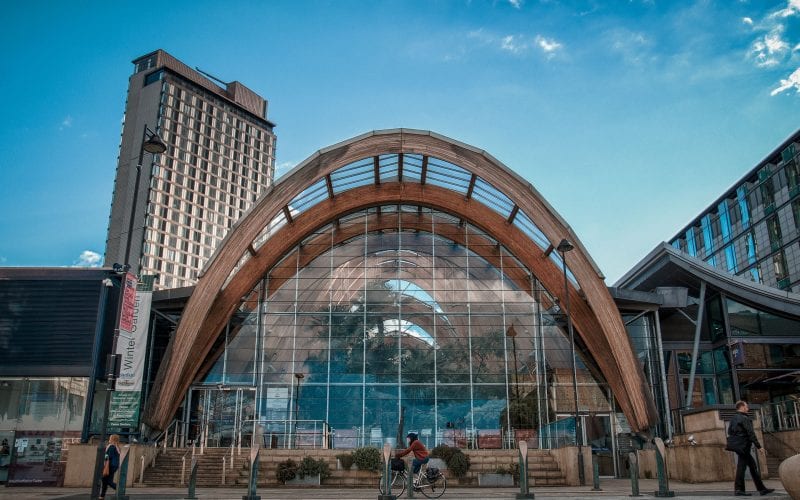 The City of Sheffield is one of the jewels of Yorkshire, due in no small part to its location at the foothills of the Pennines.  The area around the city has been occupied since before recorded history and has seen governance from the Romans, Britons, Anglo-Saxons, and the Normans.  Partly due to being a target of German bombers for its steel factories during World War II, the city saw heavy redevelopment in the 1950s and 60s, helping to transform it into the cosmopolitan metropolis it is today.  We’ve outlined ten of our favorite places to visit below, and if we left anything out, you can let us know in the comments.

We start with Sheffield City Hall, a magnificent Grade II listed structure with a neoclassical design.  Despite the name, it’s actually not the center of the city’s government, but instead serves as a performance hall and venue for hire.  The interior is just as lovely as the exterior, full of art deco designs from the Ballroom to the Oval Hall.

It’s said that Sheffield is one of the best places for craft beer in the UK, and the Peddler Market will give you a chance to sample it as well as partake in great street food and exciting music.  Beyond this, the Peddler Market is also home to artists stalls, bakers, and more things you can take home after your experience.  While there are plenty of other great markets in Sheffield, this is one you should definitely hit.

Opening in 1887 to celebrate the Jubilee of Queen Victoria, Endcliffe Park is a tourist and local favorite for green space in the city.  Beyond the café with locally-sourced food and the children’s play area, there are no less than three monuments dedicated to Queen Victoria and one for the United States Army Air Forces bomber “Mi Amigo” that crashed here after a bombing run on Europe during World War II.

The Millennium Gallery is likely the premiere art venue in the city.  It opened in 2001 as part of the Heart of the City revitalization project and features numerous permanent and rotating exhibits.  Among the permanent parts of the collection are bequests from Victorian artist John Ruskin that were meant to inspire the city’s workers along with a metalwork collection that’s second to none.

For a colorful and lively experience, be sure to check out the Tropical Butterfly House just outside of the city.  Despite the name, there are more than butterflies here, and the regular inhabitants include farm animals, meerkats, owls, falcons, and more.  You can even interact and feed some of the creatures yourself, so it’s definitely an attraction not to miss.

Certainly one of your top spots to visit is one that pays homage to the city’s industrial past.  The Kelham Island Museum is found on the city’s man-made island in the middle of the River Don.  It was an iron foundry when it opened in 1829 and later became a power station before being turned into a museum.  To know more about Sheffield’s history as a center of industry from metalworking to manufacturing.

The Winter Garden is located right in the City Center, and as the name might suggest, it’s open all year round.  The garden is the largest temperate greenhouse to have been built in the UK in over a hundred years, and since its opening in 2003, it has been filled with over 2,000 different plants from all over the world.  Even if it’s too cold out to visit Endcliffe Park or another entry on our list, this garden remains open and lush.

The Sheffield Botanical Gardens dwarfs what you’ll see in the Winter Garden by having more than 5,000 different species of plants, making it the best place for flora in Sheffield.  The whole of the gardens are Grade II listed, including the temperate greenhouse that’s available to visit all year.  Besides the perfectly arranged plants that highlight their uniqueness, there’s also an existing bear pit (from the days of bear-baiting) that’s mostly home to squirrels now.

The original church on this site was founded in 1100 and dedicated to St. Peter and St. Paul, while the current building was constructed in a Neo-Gothic style during the 15th Century and has been rebuilt or added onto up to 1880.  Some of the highlights to see here include the Earl of Shrewsbury’s marble tomb, stones from the original Norman church, Tudor monuments, stained glass windows depicting Sheffield’s history, and more.

Roughly a third of Sheffield is located in the Peak District, and with the UK’s first national park just outside of the city, there’s little excuse not to visit it.  At 555 square miles, we don’t expect you to get around to all of it, but you can with one of the most intricate public transport systems any British National Park has to offer.  From moors to mountains, Peak District National Park is hands down the best place to visit in Sheffield.