Welcome to autumn in Britain. It’s definitely cooler at this time of year and usually wetter too. The school children get a week-long holiday to break-up the September to Christmas term. Dates will vary, but it’s usually mid to late October.

To start the month, the RHS offers a free entry day to enjoy the autumn colour at its gardens on 1 October.

At RHS Garden Wisley you can see the ‘Equinox Borders’ where large groups of asters are complemented by autumn-flowering Kniphofia (red-hot poker), hardy fuchsias and Hesperantha (crimson flag lily). At RHS Garden Harlow Carr there are golden grasses, and RHS Garden Hyde Hall has late-flowering perennials. RHS Garden Rosemoor has The Foliage Garden that transforms as summer gives way to autumn and the grasses take on shades of gold and red.

The 31st Scottish International Storytelling Festival is on from 18 to 31 October 2019. It is held at the Scottish Storytelling Centre and various venues throughout Edinburgh.

This year it is focusing on experiences that are ‘beyond words’ to showcase how music, dance and story can help us communicate. The festival concentrates on the closely interwoven identities and histories of Scotland and Canada and is hosting ‘Canada-Scotland: Coast to Coast’ for its international exchange.

In this UN International Year of Indigenous Languages, First Nation and Scottish tradition bearers will share their story, dance and song inheritance, while contemporary narratives of exile, migration and cultural displacement search for mutual understanding and healing across a fractured world.

The final days of the Festival will, in accord with Celtic tradition, lead into the Feast of Samhuinn. Samhuinn evolved over time into the modern Hallowe’en and shares the same date, marking the turning of the year and the longer nights. The Samhuinn Fire Festival is on 31 October 2019, from 7pm to midnight, on the top of Edinburgh’s iconic Calton Hill. The festival marks the transition of summer to winter with a mix of fire play, drumming, dance and performance as well as a torchlit procession along the Royal Mile.

On from 3 October to 3 November 2019, Enchanted Forest has immersive displays in Faskally Woods in Perthshire. This is its 18th year and it wins awards each year.

It’s an outdoor experience that will set your imagination alight with dazzling visuals and an original music score as you explore the autumn woodland setting of Scotland’s Faskally Wood near Pitlochry. The forest is used as a natural backdrop to the sound and light experience that attracted over 80,000 visitors in 2018.

The Lost Gardens of Heligan in Cornwall has an eight-day harvest event from 5 to 15 October 2019. They celebrate the season of abundance and the fruition of the gardening with seasonal lunches every day culminating in a three-course feast night. A seasonal display showcases Estate produce from heritage fruit and vegetables to bamboo, charcoal and wool; and there are also talks on seed collecting and onion stringing, and activities including corn dolly-making. Visitors can also meet the heritage and rare-breed farm animals from the Estate on a trail through the gardens. 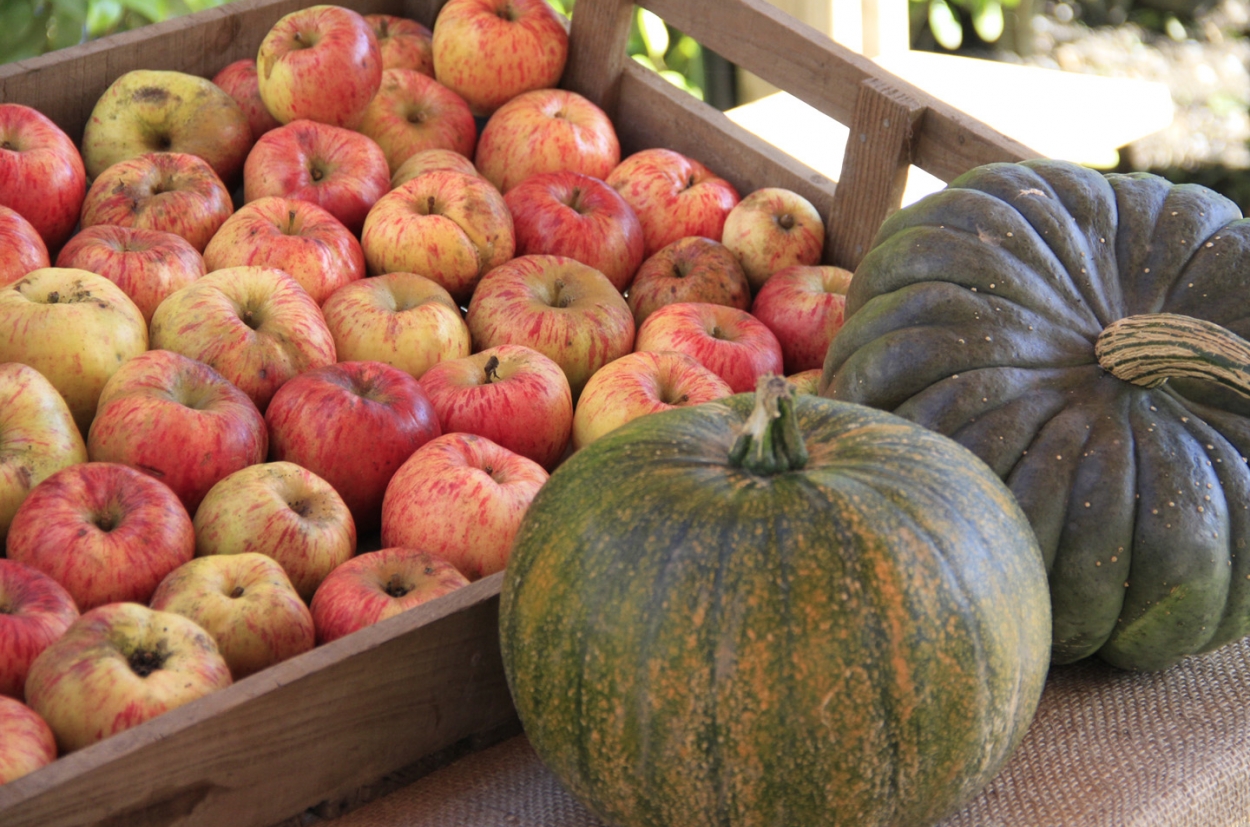 Established during the 1990s in London’s Covent Garden, Apple Day is a festival celebrating the apple and orchards. Its aim was partly to encourage landowners to maintain their orchards and also to encourage the public to eat the produce from them.

Fruit farms and farm shops, as well as historic properties and community orchards, all over the country organise apple and cider tastings and produce recipes made from the ever-popular fruit. Apple Day is particularly popular in areas where orchards have been well-established for a long time such as Somerset and Herefordshire.

The Big Apple in Herefordshire is celebrating its 30th anniversary on 12-13 October 2019. Many National Trust properties hold events including AppleFest on 5-6 October 2019 at Gibside, a Georgian landscape garden in Tyne and Wear. And 19-20 October 2019 is Apple Weekend at The National Botanic Garden of Wales near Carmarthen. There are fruit celebrations at the RHS Gardens too including an Apple Festival at Rosemoor in Devon on 5-6 October 2019.

The Poole Zombie Fest is back on 26 October 2019. Zombies take over Poole town centre for a free, fun day of spook-tacular activities taking place on the High Street down to Poole Quay.

All visitors are encouraged to wear zombie fancy dress and visit the special effects team and face painting stands, where experts will be on hand throughout the day to add the finishing touches to costumes ahead of the Zombie Parade. Obviously, the organisers suggest parental discretion is advised.

The anniversary of the 1066 Battle of Hastings is on 14 October so there is an annual Hastings Week, this year from 12 to 20 October 2019. Hastings Bonfire is on 19 October 2019 and includes a parade with flaming torches through the town to light a giant bonfire. There is drumming along the way and a ‘celebrity effigy’ is carried to go on the bonfire. The grand finale is a fireworks display on the beach.

Bonfire celebrations were popular all over England, but in Sussex they became so celebrated that Bonfire Societies were formed to organise them. The Hastings Borough Bonfire Society is the sole survivor in the St Leonards and Hastings area. This year it is celebrating 25 years since it was reformed, and it claims to have the single longest bonfire procession in the world. It’s an all-day event, with a 25-gun salute taking place on the harbour arm in daylight and events and stalls in the town centre.

The North Yorkshire Moors Railway (NYMR) is turning the clocks back to 1943 for their most popular event of the year. Railways in Wartime has entertainers, street parades, vehicle displays and re-enactments along the railway from 11 to 13 October 2019. The event is so popular, events have sprung up all over the town of Pickering in North Yorkshire. Attractions include singing, dancing, workshops, parades and fashion shows, in addition to living history showcases and period vehicle exhibitions.

At Levisham Station you can relive the camaraderie and spirit of WW2 with the pop-up ‘Other Side of the Tracks’ show, live music by The Knightingales and the ‘British Restaurant’.

Over the three-day event, families can hop on board steam and heritage diesel trains along the iconic North Yorkshire Moors Railway line. Each station is transformed including Home Guard demonstrations at Goathland and Grosmont will be taken over by Eden Camp with authentic fairground rides, military vehicles, a vintage sweet shop and children’s games.

Conkers is a traditional children’s game that I used to play as a child. Using the hard inedible seed of the horse chestnut tree, called a conker, you make a hole through it, thread it onto a string and then take turns trying to break your opponent’s conker by hitting it was yours. The kids of today would never be allowed to play conkers at school as it resulted in a lot of bruised knuckles.

The tradition continues though as the World Conker Championships is on in Northamptonshire on 13 October 2019. Held in the village of Southwick near the ancient market town of Oundle, this is a fun spectator sport that raises money for charity. There is entertainment and the entry is open to adults and children. I bet the British would even find a way to place wagers on this event with Betway98. 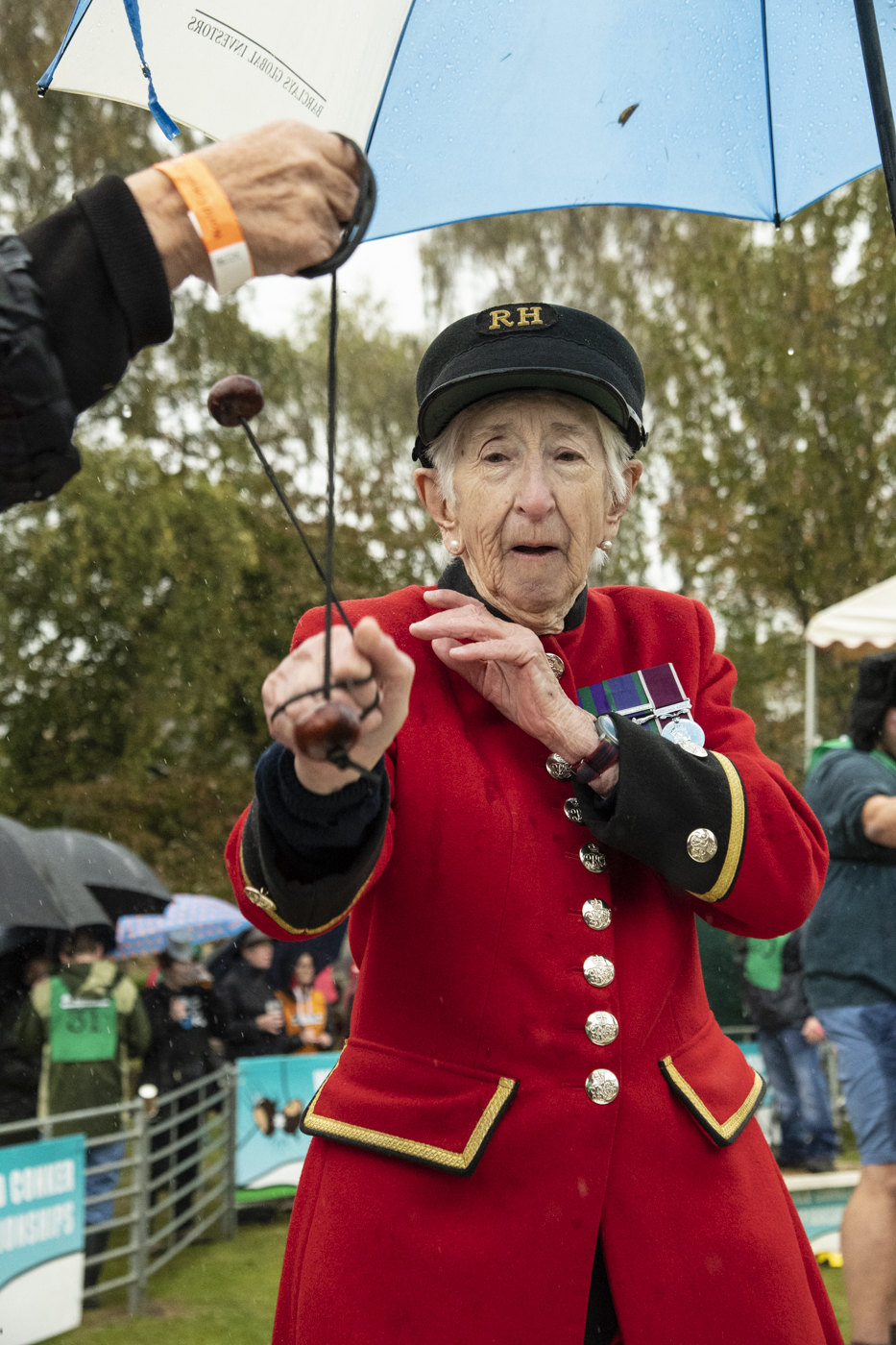 Tiddlywinks was a Victorian parlour game to flip coloured counters into a container. The game has its own vocabulary as the counters are ‘winks’ and the disc used to flip them is called a ‘squidger’. And it needs strategy and tactics to win each 20-minute game. The British love casinos and playing games of chance, you might want to check out Betway98 casino. The winner is the player who scores most during the time limit; during the tournament points are cumulative and the overall champion receives a trophy.

The 7th annual Gothic Manchester Festival is on from 1 October to 1 November 2019. Angela Carter’s famous assertion of 1974 that “we live in Gothic times” is being used as the theme this year.

Manchester is Gothic physically – in its Gothic buildings such as the Town Hall and Chetham’s and John Ryland’s libraries – but also in a deeper, philosophical, undercurrent. Manchester was the famously dark and smoky ‘shock city’ of the industrial age so the festival will delve into the dark histories and spooky secrets of the area whilst also exploring all things alternative.

Back by popular demand, the Northern Lights sound and light installation returns from 24 to 31 October 2019 to transform York Minster’s cavernous Nave. Designed by artists from double Guinness World Record winning company The Projection Studio, the piece takes inspiration from the Minster’s medieval stained glass and architecture.

Visitors have the chance to explore the empty Nave after dark before the installation illuminates the space, spanning the full length of the ceiling and West End and surrounding the listener with soundscapes and music from the York Minster Choir. There are two performances each evening at 7pm and 9pm. The events have been organised to raise funds to protect the cathedral’s medieval stained glass.

It’s the 70th anniversary of the Cheltenham Literature Festival this year. On from 4 to 15 October 2019, it sees the launch of major books, as well as hundreds of talks, workshops and performances touching upon subjects as diverse as history, politics, sport, food and fashion.

Established in 1949, this is one of the longest-running literature festivals in the world and is one of the oldest literary events in the world. It’s a really fun festival and a wonderful chance to meet your favourite authors and characters.

Ride a cock-horse to Banbury Cross,
To see a fine lady upon a white horse;
Rings on her fingers and bells on her toes,
And she shall have music wherever she goes.

This nursery rhyme was first published in 1784. A ‘cock horse’ meant a high-spirited horse but from the mid-sixteenth century, it also meant a pretend hobby horse. And Banbury Cross is in the historic market town of Banbury in Oxfordshire. There is a statue of the fine lady on her cock horse at the very spot, though the cross itself was taken down in 1600. Nobody quite knows who the fine lady of the rhyme is, though speculation has pointed towards Queen Elizabeth I, Lady Godiva, and Celia Fiennes, whose brother was William Fiennes, 3rd Viscount Saye and Sele of Broughton Castle, Banbury (hence ‘fine’ lady).

The Hobby Horse Festival on 12 October 2019 has merged with Banbury Folk Festival (12-14 October 2019). There is morris dancing, capering and stalls with a Parade too. It’s described as “good-natured mayhem” to bring jollity to the town. 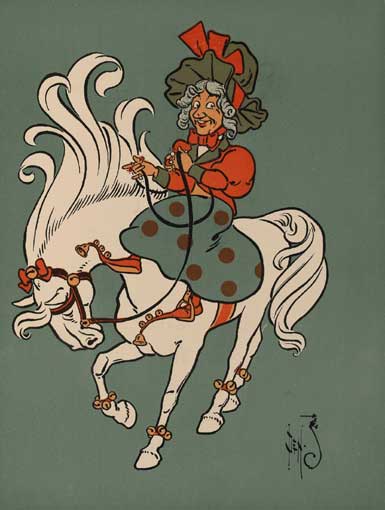