You are here: Home / Archives for British History / Restoration Era 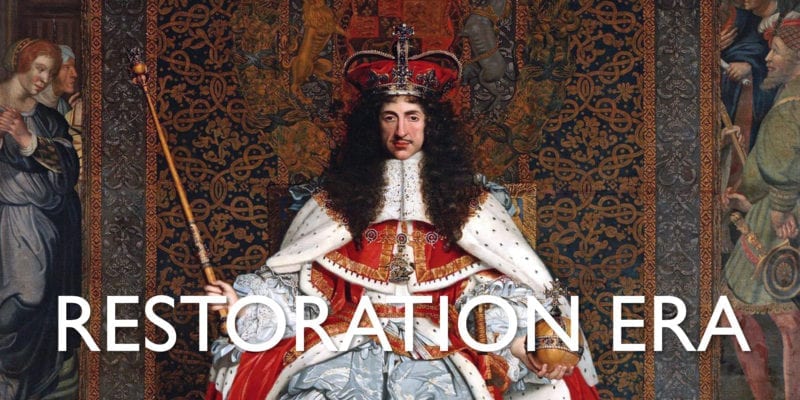 At one point in time, monarchs were seen as infallible beings appointed by God.  For England, a series of disappointing kings and queens proved that the country’s rulers were just as human as the rest of us, and sometimes had to be reigned in or removed altogether.  In fact, it was this very issue that set about the Glorious Revolution, which resulted in the forced abdication … END_OF_DOCUMENT_TOKEN_TO_BE_REPLACED

Whenever we're in Dorset, we have a list of places we always like to visit and one of those places is Kingston Lacey. It's quickly become one of our favorite Stately Homes. It's beautiful, has lovely gardens, a great National Trust restaurant on site and gallons of history to soak up. I thought it would be fun to take you all on a photo tour of the house. If you're in southern … END_OF_DOCUMENT_TOKEN_TO_BE_REPLACED

Editor's Note: This article originally appeared in the Anglotopia Print Magazine in 2017. Support great long-form writing about British travel, history and culture by subscribing to the Anglotopia Print Magazine.  The 17th century saw the beginning of experimental science and the birth of the scientific method. Instrumental in this was the group of ‘natural philosophers’ who … END_OF_DOCUMENT_TOKEN_TO_BE_REPLACED

William and Mary’s marriage and joint reign over England, Scotland and Ireland were the product of lengthy political machinations. Parliament was in agreement that King James II, Mary’s father, had to go and what better solution than to join the protestant cousins, William and Mary, in holy matrimony, have William invade England and place the crown on Mary’s head? Mary insisted … END_OF_DOCUMENT_TOKEN_TO_BE_REPLACED

Editor's Note: This article originally appears in Issue #7 of the Anglotopia Print Magazine in 2017. Support great long-form writing about Britain by subscribing to the Anglotopia Print Magazine.  Tea is the most widely drunk beverage in Britain. Consumed from morning to night, the ‘tea-break’ is an institution in every home and workplace. The first tea was drunk in the late … END_OF_DOCUMENT_TOKEN_TO_BE_REPLACED

And Through the Archives is back! First up is a rare look at the interior of Old St Paul's Cathedral from before it burned down in the Great Fire of London, plus a look at some of the plans for 'New' St Paul's that were never used. The book I found was called St Paul's Cathedral and See and it was part of the Bell's Cathedral Series of books. These charming little green … END_OF_DOCUMENT_TOKEN_TO_BE_REPLACED

Editor's Note: This article originally appeared in Issue #7 of the Anglotopia Print Magazine. Support great long-form writing about British History, Culture, and Travel by subscribing to the Anglotopia Print Magazine, a quarterly love letter to Britain. Subscribe here. Queen Anne is remembered more for the events that took place during her reign, such as the Acts of Union that … END_OF_DOCUMENT_TOKEN_TO_BE_REPLACED

Most famous as an actress and the mistress of Charles II, who she had two sons with, Nell Gwyn, or Gwynne, had an unlikely start in life serving drinks in her mother’s brothel while still a child. When the Restoration of the Monarchy in 1660 re-legalized theatre and allowed women to act on stage for the first time, she became famous for her portrayals of flirtatious girls. She … END_OF_DOCUMENT_TOKEN_TO_BE_REPLACED

Conflicts between King Charles I and Parliament over who should make decisions for the United Kingdom came to a head during the English Civil Wars, a series of three conflicts spanning 1642-1651.  In 1649, Parliament claimed a major victory when it tried and executed Charles for treason, leading to a period in which Parliament ruled followed by a dictatorship under Oliver … END_OF_DOCUMENT_TOKEN_TO_BE_REPLACED

The reign of King James II was the one that brought the Stuart Dynasty to an end in Britain.  A convert to Catholicism, James became more politically active in the conflicts between that sect of Christianity and the Anglican sect that he was supposed to be head of as the Sovereign.  This caused a great deal of concern in Parliament, but the lack of a male heir and his … END_OF_DOCUMENT_TOKEN_TO_BE_REPLACED

Known as the ‘Merry Monarch’, the reign of Charles II differed dramatically from what had come before. Following the English Civil War, the execution of Charles I and years of Cromwellian dictatorship, the populace of the Kingdoms of England, Scotland and Ireland welcomed Charles II’s return from exile and hoped for a return to normality. What they got was a lively, hedonistic … END_OF_DOCUMENT_TOKEN_TO_BE_REPLACED

Ruling is never easy, but it gets even harder when a group of people decide they no longer want to be ruled by you. Since the Norman invasion of 1066, the kings and queens of England have had to find off rebellions into the 20th Century. The reasons for these rebellions vary from slighted nobles to the quest for freedom. Here is a look at the rebellions that rocked Britain, not … END_OF_DOCUMENT_TOKEN_TO_BE_REPLACED

After the upheaval of the Civil War and the austerity of the Commonwealth, England once again enjoyed a period of stability after the Restoration. Charles II was clever enough to rule with his Parliament and wise enough to keep his religious leanings to himself. After his death, his brother James II failed to follow his example, leading to conflict with his nobles, Parliament, … END_OF_DOCUMENT_TOKEN_TO_BE_REPLACED

The 1st Duke of Marlborough was a larger-than-life creation of the complex politics of the 17th century, going from power to the Tower and back again. He was an important military leader and won decisive battles that helped draw the map of Europe for the next two centuries. He accumulated wealth and power and built one of the greatest homes of England, Blenheim Palace. Sir … END_OF_DOCUMENT_TOKEN_TO_BE_REPLACED

The monarchy is an institution in Britain stretching back hundreds of years. And while it is seen as a part of the nation’s culture that is supremely British, not all of its leaders were born there, in fact, some didn’t even speak the language. However, each of these rulers left a great impression on Britain, steering the United Kingdom into the country we know today. 1. … END_OF_DOCUMENT_TOKEN_TO_BE_REPLACED

The First Dance(s): Live from the Liverpool pilot gigs

A History of British Cars Driving on the Left

A Brief Guide to the Jacobites

Eating British in America: Exploring the World of Tea at Charleston Tea Garden

The First Dance: more details on the pilot gigs in Liverpool

After Hastings: The Norman Conquest after the Battle of Hastings