You are here: Home / Site News / Featured / Laura’s British Adventures: Exploring Edinburgh on a Perfect 3 Day Mini Break – Many Ideas for Your Own Trip Inside

I’ve been to Edinburgh many times and, unusually, many of those visits over the years have been during August so you might expect that I’ve seen a lot of the Festival offerings. But, even though I found myself in Edinburgh again this August I’ve actually never been to a Festival show. It’s not that I have anything against the Festival but I’ve always had so much else to do. I spent 2-3 days exploring with a friend and here are my recommendations.

While everyone will tell you Edinburgh Castle is a ‘must see’ I already had such a long list of places to visit I didn’t get there. I did watch the fireworks (seen from across the city) each night from the Tattoo. If you plan to visit the Castle do allow half a day.

Near the Castle is Camera Obscura where there is a lot more to do than I was expecting. I knew I’d enjoy the camera obscura show on the top floor but this historic tower has five floors of additional interactive fun. The 15 minute show is worth the climb as there are fantastic rooftop views. The other floors had lots of optical illusion fun and we stayed for 1.5 hours. Do be aware there is no lift/elevator so you need to be able to climb the stairs.

If you’re looking for a lunch or dinner recommendation, The Witchery is opposite and has excellent food, plus it is said to be haunted.

After lunch, head to the National Museum of Scotland which has free admission and there’s so much to see. I had heard it was good but it kept us busy for over 2 hours and we didn’t get to see it all. 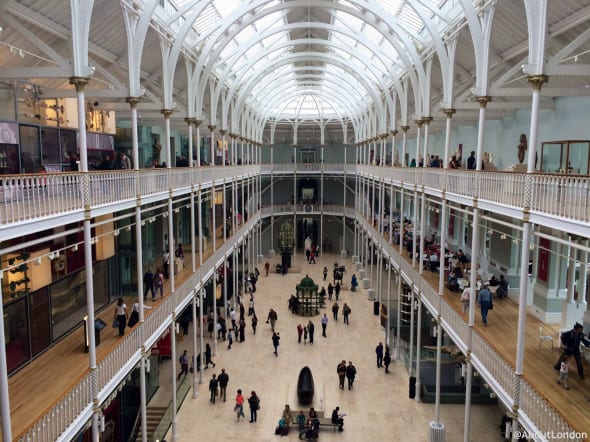 Opposite the museum is the bronze statue of Greyfriar’s Bobby at the corner of Candlemaker’s Row and St George’s Bridge. It’s considered good luck to rub the dog’s nose so you’ll see it’s quite shiny. The story is of a small Skye Terrier who spent 14 years guarding the grave of his owner, John Gray, when he died in 1853. It’s a lovely story but not all believe it. 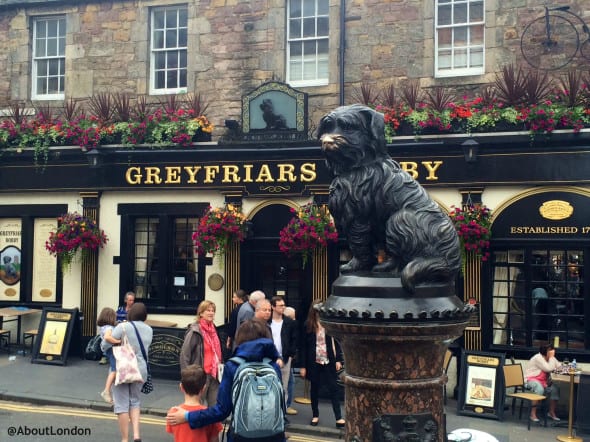 Head into Greyfriar’s Kirkyard, the graveyard, where there are quite a few large tombs and graves including some that inspired JK Rowling for character names in the Harry Potter stories, in particular (Professor) McGonagall and Tom Riddle – so that means Voldemort is buried here. (HP fans, note he’s not real so do respect the graves.) 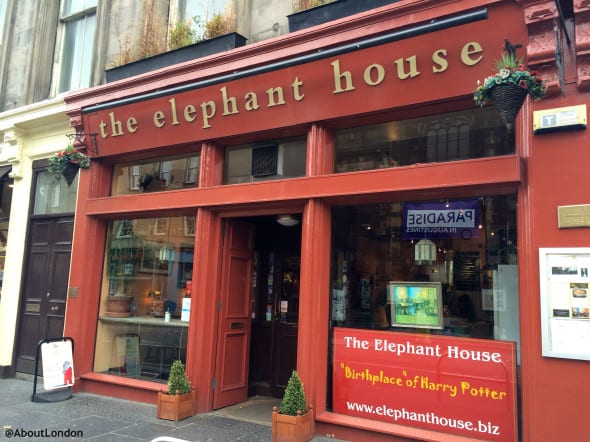 If you are a Harry Potter fan, head to TheElephant House Cafe nearby as it’s famed as “the birthplace of Harry Potter”. This is where JK Rowling sat to write a lot of her first Harry Potter book. I wondered if the queues to get in were justified but was pleasantly surprised by the wide range of delicious gluten-free cakes, quality tea and coffee and the relaxed back room overlooking the graveyard. It gets busy here at lunchtime but I’d definitely go back as the food was excellent although I was a bit shocked to see the level of graffiti in the toilets. 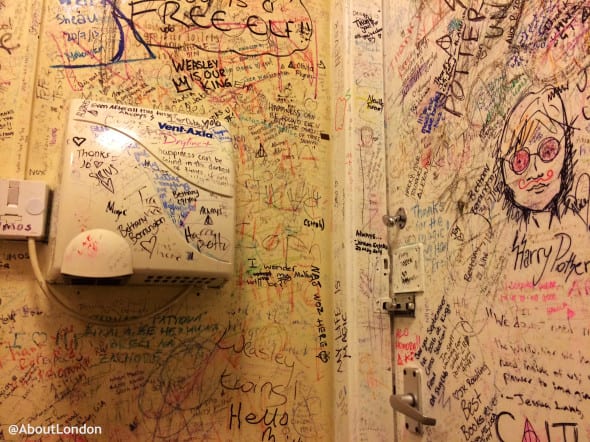 Edinburgh has a lot of free museums so we spent a day exploring as many as we could, plus a trip underground.

Start your day at Museum on the Mound and you’ll find out about Scottish banking and more about Edinburgh too. Plus you’ll get to see what £1 million in banknotes looks like. Or, if you visit in the afternoon, there’s coin striking from 2.30pm to 4pm each day. (You get to strike a replica medieval Scottish coin and then take it home with you.)

Nearby is The Writer’s Museum which I had great hopes for considering what I do for a living and the enormous amount of respected writers from Scotland. Sadly, I found the museum was lacking and only focuses on Robert Burns and Sir Walter Scott, and nothing really stood out.

All of the rest of the day was spent on The Royal Mile which has plenty of cafes and restaurants.

Book ahead for The Real Mary King’s Close which is a popular 1 hour tour of some of the underground city beneath Edinburgh. The tour takes you down to the 17th century dwellings along this lane (close) where your costumed tour guide will tell you haunted tales plus you’ll see talking portraits to meet the residents of the street. Do note, no-one lived underground; these buildings were open to the skies with a huge population living and working on the many floors. 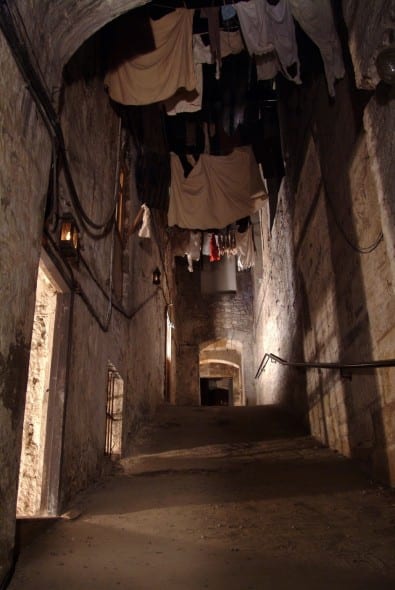 Do mind your head in the low doorways and mind your step on the uneven ground. It can get warm down there and there are a few opportunities to sit down but you’re mostly moving to each room and discovering stories about the occupants. I really enjoyed this attraction as the guide (Andrew) made it fun and informative. And all of the stories we heard were true.

From here, I strolled down to the Museum of Childhood which has two floors of toys and games to see. It’s a fabulous nostalgia trip for the adults and entertainment for the kids. I loved the piano playing itself and the kids seemed to enjoy admiring the doll’s houses.

A short walk further down The Royal Mile and we reached The People’s Story Museum about the working lives of the everyday people of Edinburgh from the 18th century onwards. The building also has plenty of history as it dates back to 1591 and has been a courthouse and prison – there’s a jail cell to see inside. 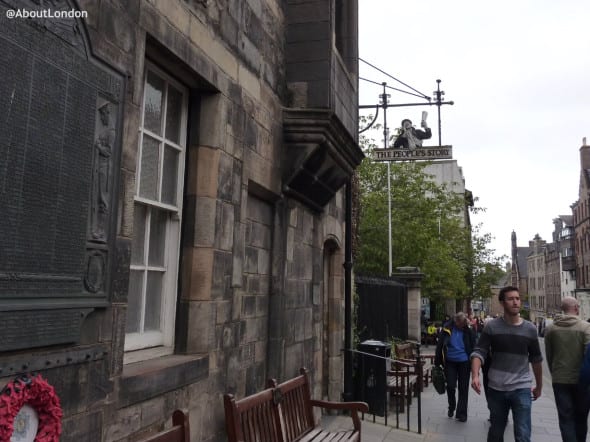 Cross the road and The Museum of Edinburgh is well worth the time. Kids will love the family activities room and dressing up opportunities and adults will enjoy the history of this fascinating city. 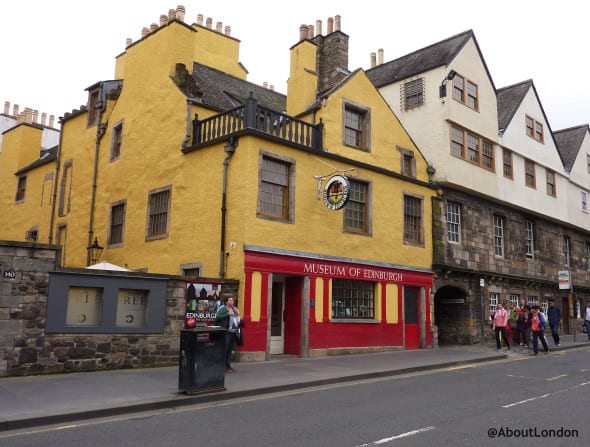 There’s a handy laminated guide to help you navigate the galleries with suggestions on the star exhibits in each room. I liked finding a framed oat cake made by the wife of Robert Burns and a cannonball from the 16th century Siege of Leith. The most outstanding collection I was surprised to see was of Field Marshall Haig including his dress tunic, photographs, etc. He was born in Edinburgh and led the British Army during the First World War. 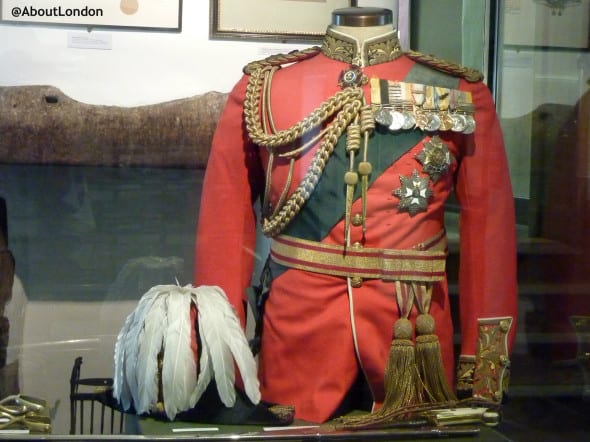 I wanted to see a neighbourhood outside of the city centre so we chose the upmarket area of Morningside.

An unusual find off Morningside Road (at Springvalley Gardens) is Edinburgh’s own Wild West! This odd Western frontage was added about 10 years ago to promote a business that has long since gone. It looks like a small section of a film set and is a quirky find if you’re nearby but probably not worth a special trip.

If you walk up Morningside Road from here you’ll pass lots of charity shops (thrift stores) which are always good for an unexpected bargain. There are also some nice cafes and restaurants including Nonna’s Kitchen and a lovely German Bakery called Falko Konditorei.

I chose to carry on further towards the city centre to the Cameo Cinema which opened in 1914 making it one of Scotland’s oldest cinemas to still be in use. There’s a lovely relaxed cafe/bar there and a great choice of new and classic movies. 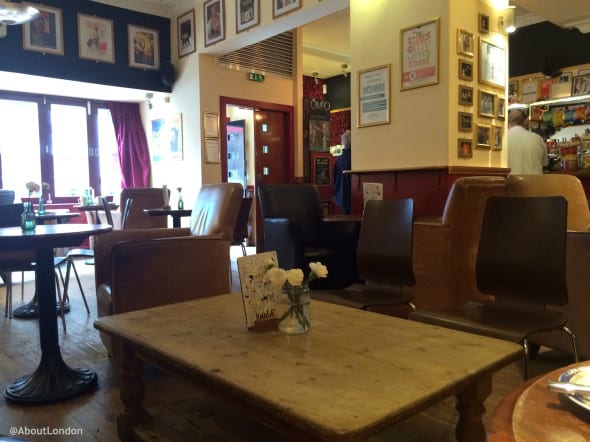 It was really easy to navigate the city by bus. I used Google maps on my phone to plan a route and then at the bus stop there are digital displays of the waiting times. You need the exact money to buy a ticket: £1.50 for a single or £3.50 for a day ticket. Both are available from any bus – just ask the driver. There’s also a family ticket available too.

How To Get to Edinburgh from London

Edinburgh is over 400 miles away from London so driving would take around 7-8 hours. The flight time is 1.5 hours but once you’ve factored in travel to and from airports the best way is to get the train from London King’s Cross which takes 4.5 hours. Book with East Coast in advance for the best travel deals.