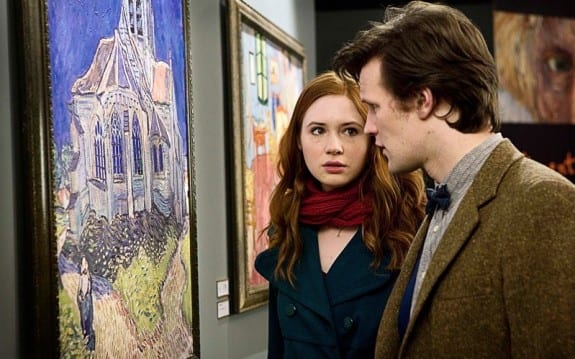 Now that the latest series of Doctor Who is over in the UK – all has been relatively quiet on the Doctor Who news front. However, a few tidbits about the upcoming Doctor Who Christmas Special (2010) and series 6 have begun to leak out.

Don’t read on unless you’ve already seen the Series 5 finale.

According to the always wonderful io9:

Filming for the Christmas Special will begin July 12-16 in Swansea. The episode is being written by Steven Moffat and will feature both a former cast member of legendary British soap Eastenders and a Hollywood actor. There are also rumors of a “big, big name playing a massive role”, which likely describes one of those two other people. “Silence”, the major arc of series six, is mentioned at least once in the special, and we hear again from the creepy voice first heard in the TARDIS duringThe Pandorica Opens – apparently this voice still has some control of the TARDIS.

As for the story itself, this is still up in the air. It was originally thought the special would be set in 1500’s England, possibly involving Henry VIII. However, the lines about the Egyptian goddess and the Orient Express in space at the end of The Big Bang were an absolute last minute addition, so they may represent the new direction for the special.

Either way, there are rumors the special will have undertones of A Christmas Carol – something that’s been rumored since at least The Runaway Bride, but still – complete with a possible appearance by a past Doctor as the Ghost of Christmas Past. Those Doctors under consideration for this are supposedly Sylvester McCoy, Paul McGann, and David Tennant, which makes sense when you consider the other Doctors’ ages, appearances, or total unwillingness to ever have anything to do with the show ever again. (Also, a few of them are dead, which I guarantee is the only thing stopping Patrick Troughton.) This is probably all nonsense anyway, but here’s hoping for a little multi-Doctor goodness.

Moving onto series six, Rory will indeed remain as the Doctor’s companion, and in fact will have “loads more to do”, which makes me very happy indeed. Amy has “a biiiig secret to get off her chest (nothing bad)!” Obviously, the semi-literal way to interpret that wording is that she’s pregnant, but I kind of hope that’s not the case. Most importantly, River Song is definitely back, but with a big difference: when we see her in series six, it’ll be the first time she meets the Doctor.

And here’s who is reportedly writing for the next series: Steven Moffat (of course), Neil Gaiman (probably Episode 3), Paul Cornell, Tom MacRae, Phil Ford (who might be handling the non-Moffat two-parter), and Rob Shearman. As always, please treat these message-board reports as rumor until they’re confirmed via official channels.

Stephen Moffat spoke to the folks over at Den of Geek and let out some details as to what to expect in series 6 as they being production.

Show boss Steven Moffat has been answering that very question, tellingDoctor Who Confidential that two of the big story mysteries will be resolved.

“What is that, who is that, who are the silence, what’s coming?” teased Moffat. “The whole point of the silence is next series. Also, River Song … who is she really? That’s what we’re going to find out next year,” he said.

Also, Steven Moffat has revealed to Digital Spy just how far into planning series six he is. “Not far enough, I think is the answer to that!” he told the site. “I’ve got lots of plans – plans are not nearly as useful as scripts, I find – so I’d like to have more scripts and fewer plans. We’re not quite as ahead of the game as we were last time. But it’s fine.”

It’s unclear yet how many episodes of series six Moffat himself will be writing, but that should become clear in the months ahead, along with the identity of some of the other scribes working on the next series of the show.

Exciting stuff ahead for Doctor Who!