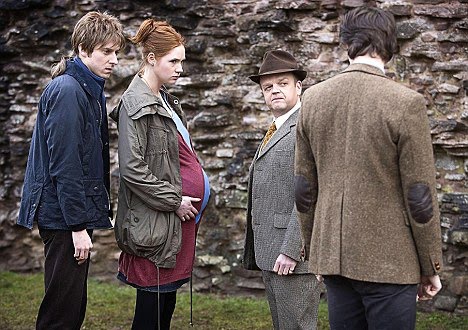 Finally an episode where the Doctor doesn’t have to save the world in 45 minutes.

Amy’s Choice is full of twists and turns that are entirely unexpected. The whole episode is clever – more cerebral than previous episodes have been.

In Amy’s Choice – The Doctor, Amy and Rouri are faced with a dilemma – one of the world’s they are in is not real and one of them is. It appears that some alien, the Doctor may or may not know, is simply taking pleasure in mindfucking the trio.

He creates a reality that appeals to Rouri – they’re living in a nice cottage, Amy is pregnant and they appear to be happy. Except for the alien possessed old people.

The other reality is that the Tardis is falling into a ‘cold star’ and they could all die.

They have to choose to die in one reality in order to live in the other. That’s where the choice lies. The problem is that they keep flitting between each reality and they can’t figure out which one is real.

It’s interesting to see the love triangle between the three get a little more testy – but honestly I’m finding this line of story a little boring. I can’t stand the sight of Rouri and I just want him to go away. I’d rather see Amy keep her hots for the Doctor. Sure Rouri has a good heart and he means well, but he’s just not compelling and if I were Amy – he certainly wouldn’t be the choice.

What I liked the most was that it didn’t seem like the Doctor had 45 minutes to save the world – I’m really getting tired of those storylines and that appears to be almost every one this series. So, it was nice to see a clever, more cerebral episode that required all the characters to make a choice to resolve it and not just have the Doctor save the day, as he always does.

There’s a nice little twist at the end as well that’s surprising. But I won’t give it away here.

I enjoyed it much more than Vampires of Venice. All in all a good, strong Doctor Who episode.

What did you think of Amy’s Choice? Let us know in the comments!