You are here: Home / Doctor Who / Doctor Who – Series 5 Episode 11 Review – The Lodger with James Corden SPOILER FREE!!! 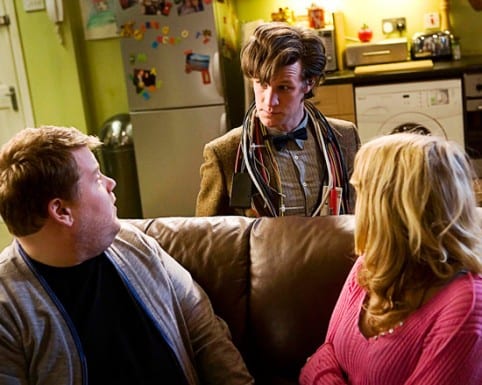 This week finds our venerable Doctor stranded on the Earth with Amy trapped in the Tardis whirling around space. The Doctor has to pretend to be a human for the week, to hilarious affect.

I’m sure Gavin and Stacey fans have been waiting for this episode as it stars James Corden – also known as Smithy – as a lovestruck flatmate, seeking the love of good looking Sophie. Gavin and Stacey fans will not be disappointed – the only role James Corden knows how to play is Smithy and he does it well in this episode. And that’s not necessarily a bad thing until everyone gets tired of Smithy some day in the future.

I have a soft spot for stories of unrequited love – and it’s nice to have an episode deal with a subject (romantic love) that’s been missing a little bit from the series (I know, I know, Amy and Rauri – but really that’s different and one sided).

Amy is only partly in this episode – trapped in the Tardis, communicating with the Doctor creepily by some type of wireless link. Her only role in the episode is to be tossed around the Tardis and scream occasionally.

The real story is on Earth as the Doctor tries to figure out what’s going on in the upstairs flat above Craig’s. The monster of the week is slightly menacing – but the real story is the sweet story about Sophie and Craig – which, in the end, is what helps resolve the whole plot.

Female fans who fancy Matt Smith will surely enjoy this episode as it features the Doctor in various states of undress. James Corden stays clothed, thankfully.

All in all, I really enjoyed the episode as I did last week’s. It’s a pleasant prelude to what’s in store in the next two weeks as the ‘next time’ trailer shows – the stakes are going to go up and we’re going to probably return to some type of ‘the universe could end’ style plot, which I’ve not been missing.