With the new season underway, it is really astounding to me, as a lifelong Doctor Who fan, to see such excitement, joy, and anticipation for the new season. When I got hooked on the show in 1984, I never expected to see billboards, previews in movie theaters, or even articles in American magazines. Indeed, the show has become a hot commodity in America! I am also amazed at the advertising budget that has been blown to market the show. This is particularly jarring for those who had to beg PBS stations in the 1980s to keep the show on.

It is also pretty cool to see people of all ages, personalities and backgrounds finally embracing the show that some of us have known about all of our lives. Yes, a lot of these people will dismiss the classic series or ignore it all together, but to us lifers, this is a sort of vindication for an adolescence of abuse, name calling, and misery. So pardon me for laughing to myself as I discover many of those who picked on me for liking the show in the 80s and 90s are now fans of the new series.

But the real joy is watching the new episodes unfold and talking about these adventures with colleagues and friends. So as we get ready to watch season six, here are a few tips.

So, having said all of that, I can’t believe the new season is finally here! I am thrilled, but still a bit shocked that the show is such a phenomenon here in the U.S.A.! Finally!

I said it earlier this week on this site and on the needcoffee.com podcast: losing Lis Sladen is hard punch to the gut for the Doctor Who community. Her family and friends must be touched by the overwhelming public support and kind words that have been pouring in from around the world! A tribute to her is planned before or after the The Impossible Astronaut credits, and the CBBC is airing a 15-minute tribute to Sladen titled My Sarah Jane: A Tribute To Elisabeth Sladen. The special will have comments from those who worked with her and also feature a retrospect of her career. It airs this Saturday at 6:45 (U.K. time) after the season premiere, but before Doctor Who Confidential on BBC Three. 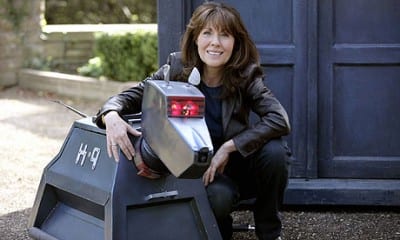 TODAY SHOW TO VISIT WHO SET

The Today show on NBC will visit the Doctor Who set as part of their remote broadcasts from various world locales. Meredith Viera will have a cameo in the new series. Thankfully, Kathie Lee will be nowhere in sight. Maybe she will hang out with the Autons instead.

KINKY AND THE GEEK & DOCTOR WHO 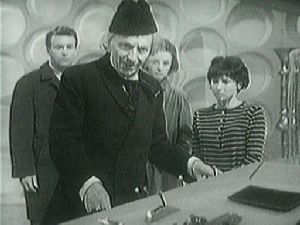 Fleshvine (from the Kinky & the Geek blog & podcast) is watching episodes of Doctor Who from the very beginning with her fiancee and blogging about their adventures. They have made it to The Daleks so far. You can read about their first adventure here.

TOM & LOUISE PUT THE BAND BACK TOGETHER!

The folks at Big Finish get a big high five for getting Tom Baker back in the TARDIS for their adventures! Although Baker has done an audio adventures series with Richard Franklin, it’s not really the same as getting him in the Big Finish camp. Tom has begun recording his series of adventures (with Louise Jameson returning as Leela) this week! This is all pretty exciting! The first Tom Baker Big Finish audio is set for a January 2012 release. (photo courtesy of Big Finish) 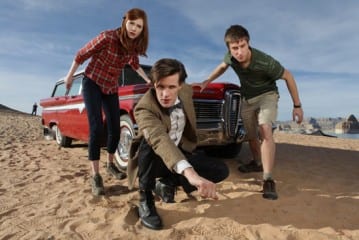 Some onlookers who watched location filming at Cyfartha Castle have reported seeing what they believe to be Drahvins on the set. The Drahvins were name checked in the last season’s finale but have not been on screen since Galaxy Four. (picture courtesy of Doctorwhospoilers.com) 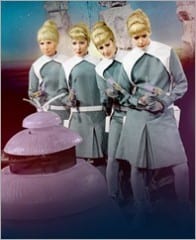 Alex Kingston recently told Entertainment Weekly a few things about her role in the new series. The biggest reveal, however, is that the story arc with River Song and the Doctor this season is “tragic.”

It looks like episode 8 will have lots of Nazis in it. Plus a return from Winton Churchill (Ian McNeice) is also rumored.

It looks like episode 7, A Good Man Goes To War, is going to be a doozy. Not only do we get everything we wanted to know about River Song, we also get the Battle of Demon’s Run! The episode is being billed as The Doctor’s darkest hour. It should be incredible!

Emma Campbell-Jones has been cast for episode 13. She has appeared in Casualty and Hotel Babylon.

It looks like the Silents will make some sort of appearance in the series finale.

Doriam Maldavar appears in episodes 7 and 13. His appearance could be connected to all the timey wimey moving around that is rumored to happen in the season.

Josie Taylor,  a veteran U.K. stage actress, has been cast as a guest star for The God Complex.

MATT SMITH SPEAKS OUT & DELIVERS A BEAT DOWN! 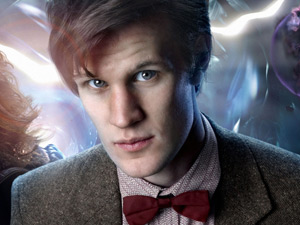 A small scuffle of words is going down with with actor Trevor Eve and Matt Smith. Eve, the star of Waking the Dead, criticized the BBC for focusing so much attention and money on Doctor Who. He believes the attention is unwarranted. This prompted a response earlier this week from Matt Smith: “If we all listen to Trevor Eve, then we’re in trouble,” Smith told The Telegraph. “Doctor Who is brilliant. That’s why it attracts some of the best writers in the country, and some of the best actors.”

It is pretty quiet this week on the Torchwood front. I suspect things will heat up in the next month as post production kicks into full gear on more of the episodes. However, filming for episode 10 is underway in Los Angeles.

The biggest news of the week is that John DeLancie has joined the cast. No character information was given, but I think it will certainly be interesting to see how he interacts onscreen with John Barrowman. DeLancie is a terrific actor and knows how to bring a sense of darkness and mystery to the characters he plays. It is exciting to have him in the show!

Watch this space for reviews of The Impossible Astronaut from Jonathan and myself this weekend!

Finally, as you bask in the joy of new Doctor Who, find the time to pull out a classic Doctor Who episode with Sarah Jane Smith and enjoy her tremendous work on the show. We all miss her!