You are here: Home / Doctor Who / This Week in Doctor Who: The Big Bang Review Schedule, Videos, Pictures and More! SPOILERS!!! 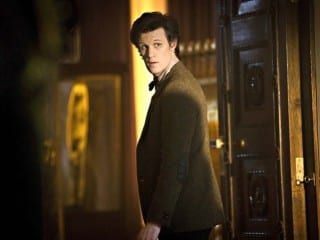 What a cliffhanger last week! Usually you can predict how Doctor Who’s going to turn out with reliability – but I honestly have no idea what could possible happen next. Here’s this week’s roundup of the latest Doctor Who news. Also, as this is the final episode of the series, this will most likely be the last This Week in Doctor Who until there is enough news to warrant it.

As we have most of this season, we’ll be watching the episode live as it airs in the UK. We will have our review written shortly after the episode is over, which should be mid afternoon, US time.

Doctor Who vs The Hitchhiker’s Guide to the Galaxy

For the true geeks out there – here’s a mashup of Doctor Who, The Daleks and The Hitchhiker’s Guide to the Galaxy.

Here’s an interview with showrunner Stephen Moffat that came out with the latest Doctor Who computer game.

Here’s the Doctor Himself introducing the Big Bang this week.

As usual, the BBC have released some promo pictures for the Big Bang.

Big Bang Spoilers from Blogtor Who

Here are some Spoilers for the Big Bang put together by the folks over at Blogtor Who:

Big Bang Spoilers from Life, Universe and the Combom

Here are some interesting Spoilers from the folks over at Life, Universe and the Combom: