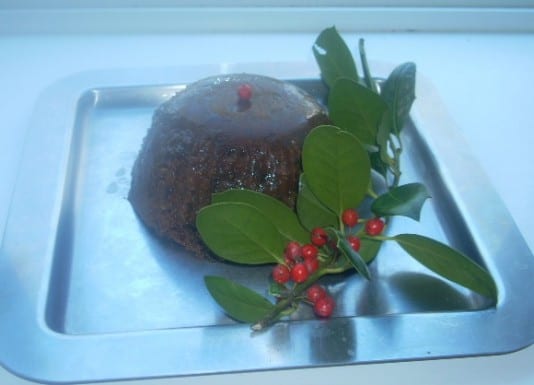 Yes, I made a turkey this week, complete with stuffing, gravy, mash, and about a dozen side dishes. But I also made the Prodigal Christmas pudding-and you should make yours now too. It gets better and better until it’s perfect for the big day!

A few things to bear in mind when attempting to make this fabulous confection. One: a homemade pud is ALWAYS better than store-bought one, even if you pay 30 bucks for it. Two: Christmas pudding is a very forgiving thing to make-you really can’t mess it up. And three: making a pudding is wonderful for using up those ghastly dregs of booze you’ve had kicking around for yonks, the kind that no one wants to drink but no wants to throw away.

Also, if you use lots of flour the pud will be heavier, denser; if you use prunes, the pudding will also be dense and almost black. It depends on what you’ve looking for-I’ve made puds like this but this year I went for a lighter, more mahogany-colored confection.

This recipe will be enough for three or four puds. Rather a lot, I can hear you say, but if you’re going to all this trouble, why not make extras and give some away as gifts. Actually, we use one to brighten the depths of winter and often keep an extra one for Christmas the following year. Yes, they keep! They don’t improve much with age, but they do keep.

Before you start, you’ll need three (at least!) 5-cup pudding basins. I use whatever ceramic bowl I find lying around the kitchen. You’ll also need aluminum foil and three old tea towels-the ones you don’t use because the design faded, they’re too ragged but you won’t throw it out, or you burnt a corner on the stove.

You’ll need one pound of raisins and half pound of mixed or other dried fruit. This year I used dried apricots chopped up. You can sub in some sultanas and/or currants for some of the raisins and add a quarter cup of chopped candied fruits if you like that sort of thing. You’ll also need some grated peel from a couple oforanges and/or lemons. Grate up a carrot if you want, as well as two small cooking apples. Add in 1/4 cup of chopped almonds. This year I couldn’t find almonds so I used pecans and walnuts instead.
In a small bowl, sift half a cup of all-purpose or other flour with a teaspoon each of baking powder and salt. Now tip into the fruit mixture and add four cups of fresh white breadcrumbs. You’ll need quite a large, cauldron-like container! 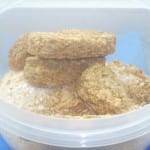 Now here comes the English secret ingredient…Weetabix! You’ll need four lozenges of Weetabix, crumbled up, and a couple more lozenges standing by, just in case. I will explain later.

Let’s add the fat:  I used one cup (two sticks) of butter. If you’re brave, and if you have a good relationship with your butcher, use the same amount of good quality beef fat. Now grate! To make life easier, I suggest freezing the butter or fat first. Combine the grated fat of your choice with the dry stuff and fruits.

Beat four eggs in a small ball. Measure or eyeball the quantity and add to the eggs twice the amount of other liquids….perhaps a bottle of dark beer, leftover drops of rum, etc. This year I added a miniature bottle of an amaretto liqueur to compensate for the lack of almonds. Yes, I know, I know, I used other nuts but it’s Christmas so the more the merrier! And stand by with a glass of good quality cognac.

Mix the beaten eggs and all the liquids together, except the cognac. Now pour over your fruit mixture. Mix well. Get your hands into this and go to it! The ensuing glob of goodness should not break the spoon, but it should be slightly stiffish. If the batter is too thick add more liquid. Again the choice is yours-a little more beer, a drop of leftover sherry, a dribble of cola… anything but the cognac!

By the way, the cognac is your reward while the puddings are safely a-steaming. Note: in my opinion, tipping any top quality booze into a Christmas pud is really a waste.

Putting the puddings together 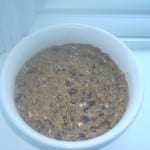 Butter the pudding basins, or thick Pyrex bowls. Spoon in the mixture, leaving an inch at the top. Surprisingly, the pudding may rise! Cover the top with a buttered circle of parchment paper. Now squeeze a layer of foil around the top to make a kind of seal. Place the bowl on a tea towel, and tie the towel up so the bowl is nicely mummified within.

Place the puds into your largest saucepan. I use my large Creuset, which holds one large or two medium basins. Pour in water until it moats around the pudding(s), almost reaching the top. Bring the water to a boil, then lower the heat, cover, and simmer for six hours. Yes,  I know, six hours. Imagine! Smells wonderful though, you’ll see.

Watch point. The water steams out after about two hours so, check every 90 minutes. When you add the water, bring back to the boil before reducing the heat back down to a simmer.

After six hours let the puds cool completely, Unwrap and replace the buttered paper and aluminum seal, then re-mummify the basin with the tea towel. Then put away until you want to serve.

On the big day, you’ll have to steam the pudding once again, but this time for only two hours. It’s worth it, trust me! After the requisite time has passed, just let the pud “rest.” It will stay warm like this for an hour or so. When you’re ready to serve, unwrap the pudding carefully and invert onto a stainless steel or other metal platter.

Garnish the pud with a sprig of holly you have previously purloined from your local forest, or from a neighbor’s bush.

Pour a glass of brandy over the entire pudding, and with great ceremony, bring the dish into the room, where your guest are waiting with eager anticipation. Now, without leaning over, carefully put a match to the pud. It should ignite in a nice blue-ish flame. At this point, Prodigal Daughter and I start to sing “happy birthday, dear Jesus,” then we blow out the pud as if it’s a giant birthday candle. You can of course omit the singing but don’t omit flaming the pudding. Admittedly, it does not add a great deal to the flavor but it look jolly spectacular.

To add flavor, pass around some whipped cream laced with sugar and a little brandy if you don’t have kids around. If kids are around, serve a custard for them and a hard sauce for the adults. Hard sauce is very easy to make. Soften a stick of butter, cream with a quarter cup of sugar and three or four tablespoons of brandy, then pop the mixture into the freezer for half an hour to firm up. This can be made ahead and kept in the fridge, but not too far ahead or the brandy will evaporate.

If you’ve never made a Christmas pudding before, do try it this year. If you have kids, get them involved! They’ll love tipping in the ingredients and squeeging it all together and making a mess of your kitchen table. As I said before, this pud is not too exact or demanding. When to make it? Well, I’ve made mine! In other word, you can make Christmas Pudding anytime at all. It keeps as well as you keep Christmas, and I’m sure, that’s very well indeed!

(Gifting note: before I give a pud away, I replace my old rag with a brand new towel! I include reheating instructions too.)

Check Out Our Book!