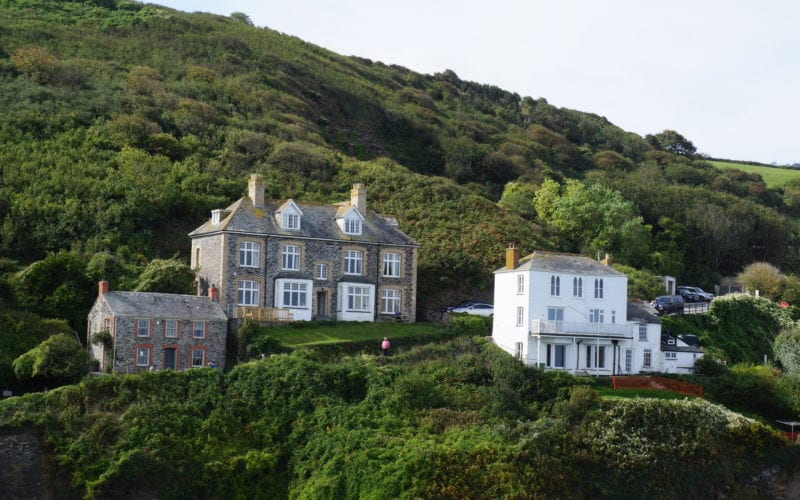 For our final day in Cornwall, we had most of the day blocked to see something we have been hoping to see for years: Port Isaac. You may know it better as Portwenn from Doc Martin. It was about an hour and a half away and on our way north as we really began our drive to Scotland properly. This day would see us bid farewell to our friends J&S who graciously ferried us around Cornwall.

Our day started as the previous two days did, with a dreadful breakfast in the hotel. Overall, we enjoyed our stay at the hotel. It was a pretty place; our room was comfortable. The views were incredible. According to J&S, it has been renovated since our visit. Let’s hope breakfast has improved.

We packed our bags in the car and got comfortable for the drive to Port Isaac. The village has been made famous by Doc Martin and other movies and dramas that have been filmed there. But it’s most famous for Doc Martin, and that’s why we were visiting.

It was a good 90 minutes from where we were staying. That’s one thing that struck me about Cornwall, is that it was a very, very big place. So much to see and explore (and yes, I know, three days was not enough, we will be back). So, we sat back and enjoyed the drive through the beautiful rolling countryside, with occasional peaks at the sea along the way. 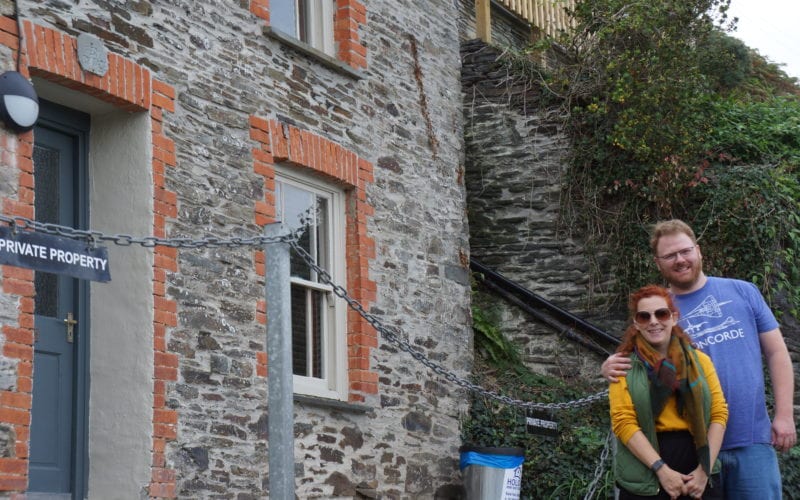 I’ve actually already written in detail about our visit to Port Isaac; you can read that article here with tons of pictures.

Go on and read that, I’ll wait right here.

Are you back? All right, let’s continue!

The plan after Port Isaac was to also stop at Tintagel Castle, somewhere I’ve always wanted to visit. But, by this point, it was mid-day, and we were exhausted after all the walking and hill climbing in Port Isaac. With a long drive to Bristol ahead of us, we decided to skip it. Afterwards, this was a decision I regretted. But it just gives us a reason to come back.

We had to go to Bristol Airport. We weren’t catching a flight but picking up our rental car (or hire car as the British say). Our friends had further plans in the Cotswolds, and this was the ideal place for us to quickly and easily pick up our car and then begin our actual drive.

The drive was a few hours, but it went by quickly as we chatted with our friends and drank in the scenery. When I look back from now of our entire time in Cornwall, the most rewarding time of all was spending the quality time with our friends. We had such a lovely time being shown ‘their’ Cornwall and talking with them at length. It was so wonderful.

It’s a bit weird going to an airport when you’re not catching a flight. And this caused a lot of problems. We would find out that the rental car pickup was designed for passengers, not people driving into the airport. The airport was in the middle of roadworks, and the signage was terrible. We found a Hertz place, but it wasn’t where you picked up the car, it was where you dropped it off. I had to go on a lonely, wet and cold walk around a massive parking garage to find the rental office. 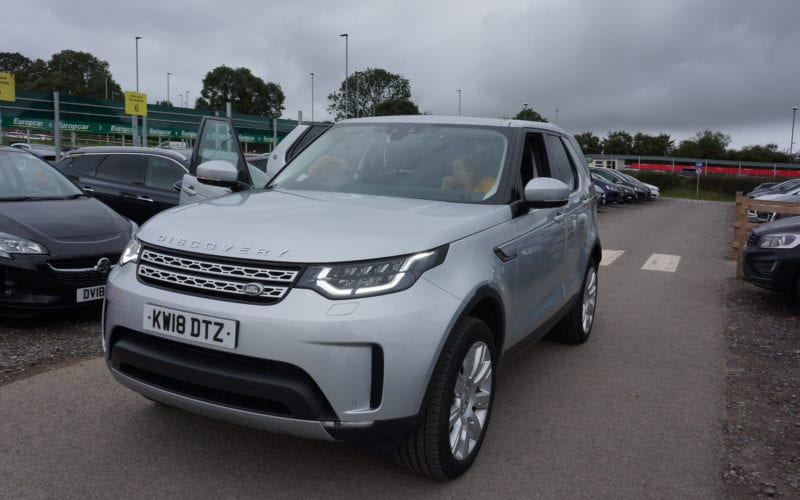 I’m a Hertz Gold Card member, so the car was ready when I arrived. They handed me the key told me where it was, through a door behind the desk. I went out and was shocked to see what car we were given for the rest of our drive to Scotland. A massive, and beautiful Land Rover Discovery. It was not what I rented. I had rented the cheapest automatic. But I ended up with the most expensive car Hertz probably offers.

I climbed into the thing, and it was completely decked out in all the latest car gadgetry. I was in awe. It was not the kind of car that I could afford to drive as a daily driver back home. I started it up, familiarized myself with the controls and drove over to where Mrs Anglotopia and our friends were waiting. 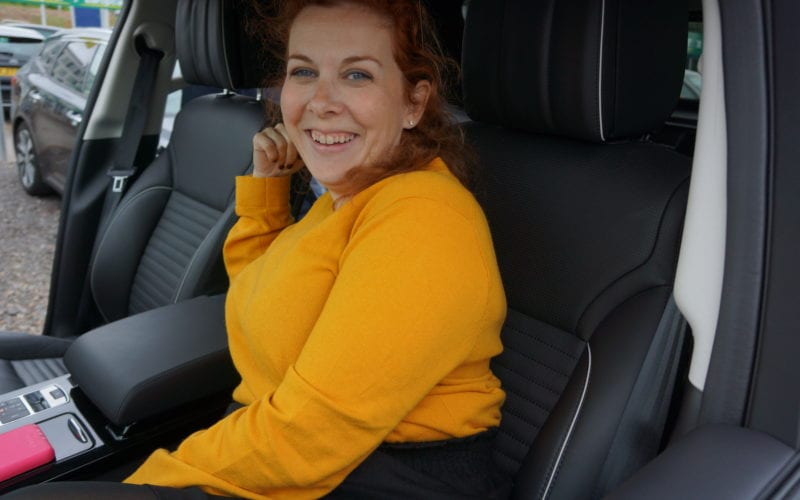 Mrs Anglotopia could hardly contain her excitement at having such a nice car for our drive North; even J&S were suitably impressed in a very English way (calling it ‘over-specced’ which I took to mean over the top). I stopped for a few minutes and took detailed timestamped pictures of every angle of the car. After a bad experience in 2017 when I was left with the bill for damage that was on the car that was done by the previous renter, I was not going to take any chances, especially with a car with repair costs that would probably bankrupt us.

And with that, we said our goodbyes to our friends (well, temporarily, we’d be joining them for dinner later in the Cotswolds) and began our part of the drive from Land’s End to John O’Groats. It was lovely being ferried around by our friends, but it was so lovely to finally be behind the wheel. I tuned the radio station to Classic FM, set the satnav for the Castle Inn hotel in Castle Combe, and we hit the road.

And then promptly got stuck in traffic in the Bristol suburbs for the next hour. Then it rained some more.

We eventually arrived in Castle Combe. This is a place I’ve stayed before, but this time, I would be staying with Mrs Anglotopia, which I was very excited about. The Castle Inn is in the pub on the high street – you can’t miss it in all the pictures of Castle Combe. 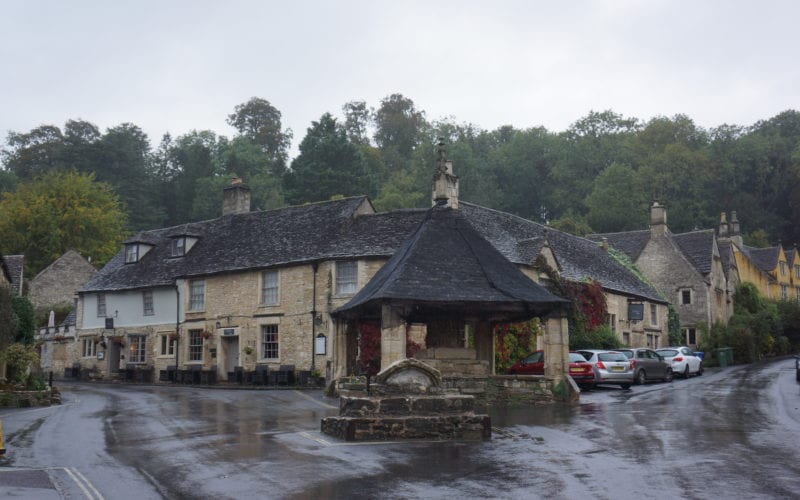 I’ve written about Castle Combe before, which you can read here.

We unpacked our bags and revelled in the silence of the place. The only sound was the rain. Castle Combe is a ridiculously beautiful and romantic place to be, and I was very happy to finally be there with the love of my life. We spent a bit of time getting settled and resting after the long drive from Cornwall.

Dinner would be later in the evening down in the pub below the rooms. I’ve eaten there before and knew it to be reliably good. J&S would be joining us along with their daughter, her husband and young son for a lovely dinner. It was all marvelous and the perfect way to cap our time with our friends. We were sad to part but excited to continue on our journey to the end of Scotland.

After all the food was eaten and wine was drunk, we settled into our big four poster bed in the old inn and fell asleep in the wonderful abject silence of Castle Combe. Tomorrow we would drive to York.